What is up everyone, and welcome to your one-stop shop for RazzBowl pre-draft materials. If you’re in the RazzBowl, then you’re one of either the lucky Pros or Joes who will compete for fantasy immortality. Come, take a seat, and catch up on some of the articles and “hot taeks.” If you’re not in the RazzBowl, then you’ll still get a lot of value out of this article, like how to draft to win against a large and competitive field of fantasy football heroes, or how to quickly make yourself a fantasy zero.

This article will be pretty straight-forward: I’ll highlight articles, summarize some tips we learned from studying last year’s winners, and give everybody enough information to have one of the best fantasy football experiences of your life.

The RazzBowl is awesome because it expands the fantasy community to include more voices. By putting top-tier industry experts in the same league with fans, the RazzBowl opens discussions about how to play fantasy sports, how to draft for unique scoring systems, and lets players get to know each other better. I encourage everyone to follow their league mates, get into a Twitter group chat, and learn about each other. Share your insights with the #RazzBowl hashtag, and let us know how your draft is going or if you’re writing up your draft experience. If you have problems or want to do a quick podcast take, Donkey Teeth is your point person. If you have gifts of rum, EverywhereBlair is your point person. If you’re just curious about strategy, player profiles, or hot takes, give our writers a follow on Twitter and check out their work across Razzball.

Did you forget which league you’re in, or want to see if your friend is in the RazzBowl? Great, we’ve got a big list of all the participants right here.

All leagues draft and submit lineups at the National Fantasy Championships website. If you like the RazzBowl, check out their other leagues and other fantasy sport offerings!

Additionally, some leagues decide to setup gifts of charity. It will be up to you and your league-mates if you want to do this. Contact Roto-Wan for some ideas on that.

We’ve been publishing, podcasting, tweeting, and organizing the RazzBowl for the past few months. So, here’s a list of articles where you can catch up on strategy:

The RazzBowl is pretty cool not only for the community and competition, but because we want to make everybody a better fantasy football player. We’ve got data from 170 fantasy managers last year–even more if you count the qualifying tournament–and we’ve sorted through it to help guide your draft. And what’s more, we’re not even keeping it secreted away in Donkey Teeth’s Tiki Room, where he put a FatHead cutout of Kerryon Johnson behind the bar. Donkey! Stop crying into Kerryon’s beer! Instead of hiding the information for our own nefarious uses, we’re giving it all to you. So dive right in and become a better fantasy player.

The Cream of the Crop

In my article, RazzBowl: The Success Stories, I crunched numbers from NFFC data to illuminate how the 20 best teams constructed their rosters and where their points came from. I’ll let you explore the article yourself, but the main takeaway from the article was this: the top scoring teams had, on average, the following point spread from each position per week:

In other words, if you are drafting a player, they had better be capable of meeting one of those goals several times per season. For the critics out there (I see you Jay Sherman!), please note that I’m not forecasting these numbers: I’m telling you that the best industry players in the world put up these numbers on a weekly basis. And that, my friends, is how you beat a field of 200ish competitors.

Our other articles and podcasts will tell you what the bad teams did, what the sixth place finisher Aaron Pags did, what third place finisher Danny Kelly did, and what the third-highest scorer Pat Fitzmaurice did. You can also check out my article “My Loss is Your Game” to see why hubris got the better of me and sunk me to an 11th-place finish in my league. When you enter the draft room, you’ll know who went through The RazzBowl Guidebook, and who spent their time watching season 3 of Dark.

Tips For the Less Experienced

The RazzBowl prides itself on the competition between industry experts and the fan community. There are people here who have played fantasy football since the days of mail-in roster sheets; there are people who who just started playing this year. Now, there are many places you can go to get draft advice and rankings, but I want to highlight some super-useful research and draft tools that Razzball provides you for free.

Nobody Wants to Lose

First, we’ve got in-depth articles where we tell you not only how to win, but how not to lose. In my article Swimming with the Sharks, I highlighted the mistakes industry experts made that resulted in last place finishes. One important takeaway from that article was this: 40% of the last place teams picked a high-risk player early in the draft. Remember: this is a cutline format, and the “playoffs” start in week 10. You won’t get to the playoffs if you’re drafting players who are backups from weeks 1-9.

Let’s reduce this to a simple draft strategy: read the room. When you see players falling beyond their ADP for no particular reason, this means the drafters in your room are being aggressive. It’s fine to be aggressive and “get your guy,” but the biggest mistake made by drafters in last year’s RazzBowl was letting the Great Mike Shark get Dalvin Cook at pick 24. Now, the aforementioned Mike Beers–winner of the 2019 RazzBowl–literally calculates best ball draft strategy for fun and his career. Take a look at his Twitter thread above for evidence. I don’t want to take away from Mike’s cunning draft strategy, but his draft room reached for Phillip Lindsay, Kerryon Johnson, and Todd Gurley, while leaving Dalvin Cook to fall to 24th overall–the lowest point Cook was drafted in any RazzBowl league, and 10 spots below his ADP. That draft room handed the master of best ball strategy the biggest gift of the RazzBowl. Mike took advantage of that error and thrashed his league-mates, winning the 2019 RazzBowl with the highest score and the championship. As Mike pontificates, you enter the draft with not one plan but twenty plans. So, dear drafters, read the room and adjust your draft strategy as needed.

Rudy Gamble has been working extremely hard to ensure that the player pages are user-friendly, informative, and built for research. It’s literally a one-stop shop for all of your research needs. Take a look up top at the search bar, type in a player, and click their name. You’ll see something like this: 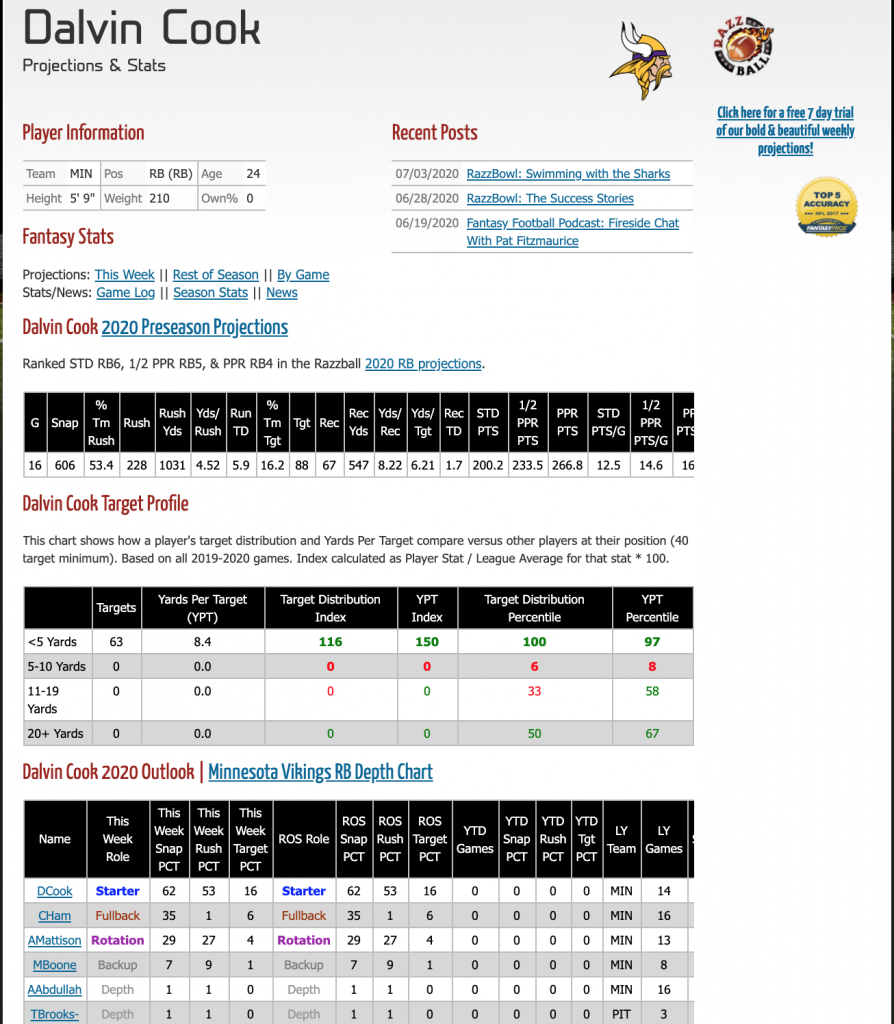 In the player profile page, you’ll get every bit of information you need: recent posts about them on Razzball, where they stand in Rudy’s projection system in three scoring systems, the player’s target profile from 2019, and the projected depth chart. If you keep scrolling down, you’ll get game logs, previous years stats, and news updates from FantasyPros. Premium subscribers will get game-by-game projections as well.

These player pages are so, so helpful for draft research and player analysis. For example, when I was researching David Montgomery, I pulled up his player page and was able to get a view on his targets, average depth of target, snap share, and I compared this all to Tarik Cohen in one place. Rudy’s setup saves so much time that it’s become my #1 source for doing player research.

If you don’t want this level of detail, then just head over to Rudy’s general projections and click on the type of projections you want. You’ll find everything from half-PPR leagues to defensive players to kickers. If you don’t even want stats, just know that he’s got players ranked on the left hand side, and use that as your constantly updated draft list.

Those of you in head-to-head leagues or daily fantasy will want to check out Rudy’s Premium Subscription as well.

Thanks for checking out The RazzBowl Guidebook. We hope you have a good time researching, drafting, and playing. Drop a note below to let us know what league you’re in, how you’re drafting, or anything else that’s on your mind.

Cheers, and I’ll see you at the #RazzBowl.