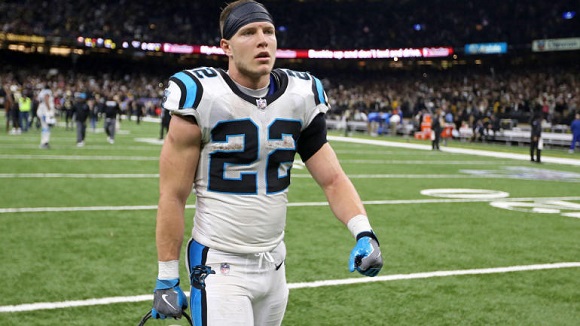 There is no denying just how important how important the running back position is to fantasy football roster construction. Once you get past the first couple of rounds, the position becomes a cesspool of what ifs. If you’re in a 12 team league, current ADP data says that only eight picks in the first two rounds won’t be a running back. It’s more important than ever to make the right pick.

Just like with wide receivers, this is a pre-training camp evaluation so my opinion is subject to change going into August. But, as of now, I’m going to let you know what running backs that I don’t see myself drafting this season. When I’m drafting running back early, I’m targeting volume second only to skill. Dual-threat is also something that I look for too. I mostly play in PPR leagues. A lot of the time, the past performance and current off season moves at offensive line can also sway me.

Christian McCaffery actually finished 10th among PPR running backs in fantasy football in his rookie season. I’d say that’s a pretty decent finish for his 2017 preseason ADP. Still, we could feel the disappointment from fantasy owners who were clamoring for him to become the every down back in Carolina (or at least average more than 7.3 carries per game). The 80-catch season is where he made his nut. Finding the end zone 7 times helps too.

So wouldn’t you assume going into his second year there is nowhere to go but up? Well, former Panthers offensive guard, Andrew Norwell signed a nice deal with the Jacksonville Jaguars leaving Carolina even more depleted on the offensive line than they were before. This won’t complicate things for McCaffery’s pass catching prospects, but I wouldn’t expect an astounding improvement on the 3.7 yards per carry that he averaged last year.

The Panthers made a very wise decision and signed C.J. Anderson. C.J. Anderson ran for 1,000 yards last season and was on the field for just over 50% of offensive snaps for the Broncos. C.J. also graded out as the 6th most effective running back in the NFL last year according to PFF. I believe that Anderson will hit the ground running (DAD JOKE!) and eat up the majority of carries so I wouldn’t expect an improvement on McCaffery’s 2017 share. As far as the passing game goes: Greg Olson, and Curtis Samuel are healthy and they drafted Maryland’s D.J. Moore in the first round. Cam Newton is going to have a lot of options that he didn’t have last season outside of McCaffery. McCaffery should have a fine season, but not good enough for me to want to draft him late in the second round. Take Chris Thompson five or six rounds later in PPR.

Lamar Miller planned on coming to Houston and becoming a superstar running back and the first two seasons haven’t exactly went according to plan. In two seasons combined, Miller averages under 4 yards per carry and 12 total touchdowns. For some reason, his ADP still sits in the fourth round of 12-team drafts. I get it, the running back pool is getting slim by this point in drafts, but wouldn’t you rather gamble on upside?

D’Onta Foreman might be nipping at Miller’s heals for more carries in 2018. Lamar Miller’s most valuable trait is volume and if Miller isn’t getting well over 200 carries, that value is shot. Houston is going to have to be a pass heavy squad because for a lack of a better word, their offensive line is trash. Their offensive line was under performing before they traded away their best producing lineman, Duane Brown. The Texans have done nothing to correct this problem.

I’m all for taking Jordan Howard in the late 20’s but his current ADP has him in the mid teens. Some analysts expect his ADP to drop as Tarik Cohen’s hype continues to build in a Matt Nagy style offense. Joe Mixon, Derrick Henry, and Jerick McKinnon are all running backs that are being drafted behind Howard that I would rather have than him at this point.

Howard’s numbers were pretty decent as a whole in 2017, especially finding the end zone nine times. One deficiency that stood out from the 2017 from the 2016 season was Tarik Cohen cut into more than half of Howard’s fantasy production through the air. Speaking of the passing game, there will be an uptick in passes from Mitch Trubisky this season. The Bears ranked dead last in the NFL in pass attempts last year and that is a huge contributor to 276 touches that Howard saw on the ground. Now, the Bears have Allen Robinson, Trey Burton, Taylor Gabriel and a spicy rookie talent in Anthony Miller. God forbid, Keven White may even be productive at some point. Never say never. Contract year. Five games with under 55 rushing yards on 10+ carries just doesn’t excite me. But like I said, watch for him if he happens to slip into the 3rd round.

Marshawn Lynch is 32 years old and competing for carries with at least two other backs. I don’t care how good the offensive line is, I’m not using a 5th or 6th round pick on Lynch. I propose the same question from earlier in this article, why not gamble on upside at this point. According to current ADP, Tevin Coleman, Dion Lewis, Marlon Mack, and both Green Bay Packers running backs are still on the board. But MB, those names aren’t RB1’s for their teams. Let’s be honest, 75%+ of offenses in the league don’t utilize a bell cow back anymore so that logic is flawed.

Marshawn barely finished in the top 25 backs in fantasy last year according to the ESPN’s player rater. Jon Gruden signed Doug Martin this off season and while this move is virtually indefensible, he apparently has been running pretty good in OTA’s. There are also Jalen Richard and DeAndre Washington on the roster who are arguably the two most talented running backs on the Raiders roster. Even if you think that Jon Gruden will run a ground and pound type of offense (puke), in Marshawn Lynch’s two games that he received at least 25 carries last season, he totaled 67 and 95 yards respectively in those games.