Aaron Rodgers: ticker tease. That’s it, that’s the post! Go home now and tell all your friends about the detailed reports coming out of Razzball. Wait, that’s not enough for you? You need the full D-Monty? Aight, let’s get the scoresheet out and tick off the ways that A-Rog teased us fantasy footballers (<– Grandpa Donk’s word) with his “Davante Double Check.”

Here’s what I have to say about the Symbiote playing for the Packers:

Aaron Rodgers / Davante Adams: Did you Google them together? Did you find that Spiderman meme where there’s two Spideys pointing at each other? A-Rog and Davante — put together — are Venom(ous). They’re a symbiote. You take one away from the other, and you end up with…goo all over the floor. OK, so faithful readers (Hi Grey’s mom!) know that Donkey Teeth said, and I quote, “Aaron Rodgers is gonezo like my bong-zo.” Wait, you don’t believe that he said that? Then go check out his Top 25 Running Backs for 2021 article. I’ll wait. [watches episode of Dr. Death]. You good? Aight. So, this past Monday, A-Rog decided that he really didn’t want to be the host of Jeopardy!, and instead allowed his journalist sources to reveal that, indeed, he wanted to keep playing football for the Green Bay Packers. What’s weird about this whole situation, is that earlier in the week (I work on metric weeks, so my weeks start on Thursday), Davante Adams announced that he was cutting off long-term contract discussions with the Packers. Then, like bros do, Rodgers and Adams posted simultaneous stories to their Instagram feeds with a picture of Scotty Pippen and Michael Jordan. The implication was that the GOATs were going their separate ways. Problem is, to make the Jordan/Pippen threat legitimate, one has to be, ya know, the GOAT in the first place. Rodgers has one Super Bowl ring from 2011. Davante Adams, meanwhile, has started in a grand total of 9 playoff games in his entire career. I mean, Jordan and Pippen started more than that in just one year. ENYWHEY. The whole “walk away from the game” spiel that Rodgers played and the whole “I’m not staying in your town” game that Adams played kind of backfired when A-Rog announced that he plans to return to the team in 2021. What does that mean for you fantasy footballers? Remember: symbiote. A-Rog has become more of a short passer while Davante Adams is his main receiver. When you separate them — say, for a trade, or an injury, or a retirement — indications point to their performance falling apart.

Here’s Aaron Rodgers’ recent trends in Intended Air Yards, Completed Air Yards, and Yards after Catch. I don’t need to make you a graph to tell you that he’s throwing shorter and allowing Adams to do more footwork after the catch.

Actually, I really do want to make a chart for you because it helps illustrate the trend in the Rodgers/Adams symbiotic relationship in 2020. You’ll see below that Rodgers’ completed air yards went down as the year progressed (meaning he was throwing it shorter) and that his yards after completion were increasing (meaning that his receivers were doing more work). 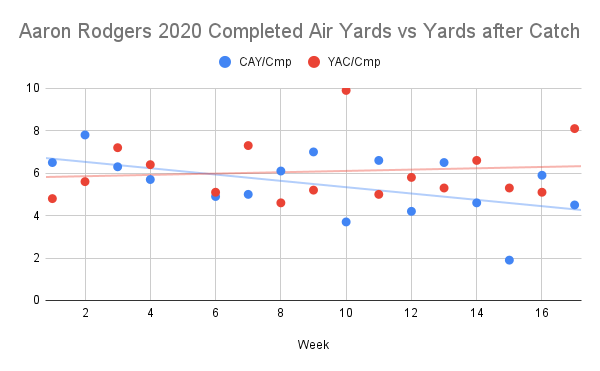 Why does this matter? Because the Rodgers/Adams symbiotic relationship was reinforced as teams began to pressure Rodgers more and more. His deeper throws were inaccurate in 2020, so he relied on those shorter throws to rack up the yards and touchdowns. Keep in mind, the trend for A-Rog’s air yards was downwards in 2020; he threw shorter and became more accurate as he faced increasing pressure from defenses. 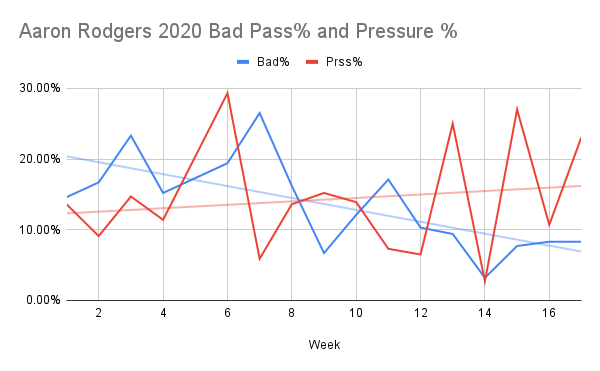 And all of this is backed up by Davante Adams amassing a ton of short targets in 2020 — 66 targets of under 5 yards — which put him at a nearly 50% higher rate than other wide receivers in the league.

And to make matters…more interesting-er…Rodgers and Adams have a very dependent relationship when it comes to fantasy productivity. Adams is responsible for nearly 30% of Rodgers’ yards and 40% 0f TDs over the past 3 years. What happens if one of them leaves town? Will Jordan Love embrace Davante as much? Will Allan Lazard take 30% of A-Rog’s yards? Better call a real estate agent! Remember that in 2019, Adams had only 5 receiving TDs, which was more the norm. It’s unreasonable to expect 18 TD seasons from top receivers, especially those receivers who rely on extremely close targets for their production.

So, what can we expect from Aaron Rodgers and Davante Adams going into 2021? Volatility! Ha! You thought I’d have a concrete answer, but I really don’t. If we look at the comps for Aaron Rodgers’ air yards last year, he was right next to (gulp) Teddy Bridgewater…and (sigh) Justin Herbert. So! We’re back into “receiver dependent” territory, right?

Davante Adams’ Average Depth of Target (aDOT) comps were (gulp) Tre’Quan Smith (isn’t he supposed to be a deep threat?) and (sigh) DeAndre Hopkins. Again, we’re looking at volatility. There are clearly working relationships between Adams Rodgers that are meaningful and somewhat predictable. However, when we’re seeing Davante drafted in the first round, we’re seeing players who are relying on massive trust in PPR pointage and Adams’ ability to run the field. To expect longer throws — like Ryan Tannehill and A.J. Brown or Josh Allen and Stefon Diggs — isn’t in the projections necessarily, and therefore we see a stronger indication of a points cap on both A-Rog and Adams for the 2021 season.

There’s still a non-zero chance — and some would argue a fair chance — that Aaron Rodgers and Davante Adams either move teams or don’t play with each other this year. For all the reasons above [waves hands] I’m asking you to slightly fade the duo in season-long fantasy. With Adams creeping up into the first round over the past couple days, I think his cost for draft position is no longer “affordable,” and Rodgers remains a top 10ish QB.

Drop into the comments and let me know what you’re thinking! Cheers everybody!