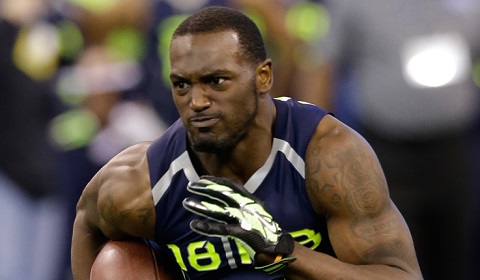 In 2009, when he was mounting a campaign to be the first white running back in 35 years to win the Heisman Trophy, Toby Gerhart was sometimes referred to as “The Great White Hope”. [Jay’s Note: Dat’s raycess.] I thought that was Peyton Hillis, but I could be wrong. Gerhart was a consensus First-Team All-America selection, the Pac-10 Offensive Player of the Year, and one of 5 finalists for the Heisman Trophy. Despite winning the Doak Walker Award as the best running back in the nation and the Jim Brown Trophy given to the top running back in the country, Gerhart’s dream of breaking the Heisman barrier fell short as he finished in second place to Mark Ingram by 28 points, which was the slimmest of margins in 74 years. He was drafted in the second round of the 2010 the NFL draft by the Minnesota Vikings and spent the next 4 years as Adrian Peterson‘s backup.

During this last offseason, Toby signed a 3-year deal with the Jacksonville Jaguars, and let me tell you something, it appears he has duped both the Jaguars and fantasy football owners worldwide. Great White Hope? More like Great White Dope. Gerhart has yet to score double digit fantasy points in his first five games. In 48 carries, he is averaging a pathetic 2.6 yards per carry for a whopping total of 123 yards. To put that into perspective, a running back has rushed for more than 123 yards in a single game 12 times already this season. The list of players that have accomplished this feat includes, but is not limited to, Jerick McKinnon, Bobby Rainey and Knile Davis.

Enter Storm Johnson. Who? Storm Johnson. Let me tell you what I know about Storm Johnson. And no, he’s not the offspring of Dwayne “The Rock” Johnson and a popular X-Men heroine. But I wonder if he is related to Big Johnson? Remember those t-shirts back in the late 80’s and early 90’s? I guess they’re still around, but I haven’t seen one in years. Drafted in the 7th round of the 2014 NFL draft out of the University of Central Florida, Storm Johnson finds himself playing alongside a familiar face in Blake Bortles, with whom he played for 3 years at UCF. In 2013, Storm rushed for 1,139 yards on 213 carries for an average of 5.3 yards per carry, and scored 14 touchdowns on the ground. He also caught 20 receptions for another 360 yards an 3 touchdowns. How will all of that translate into the NFL? I don’t know, but I’m interest to see how this 6 foot, 216 pound man can do.

While it’s a small sample size, in 4 carries last Sunday, Storm ran for 27 yards (6.75 avg) and had a 9-yard run called back on a penalty. Storm Johnson will get his big chance this week against the Titans, who are ranked 30th against the run and are giving up 136.8 yards on the ground per game. He has the ability to cut and run, but let’s see what he can do with an opportunity. Granted the Jaguars offensive line is horrible, but perhaps Storm can stir things up and make something happen. He can’t do any worse than Toby Gerhart, right? This is really just me thinking out loud. I decided to drop Jacquizz Rodgers and take a lottery ticket on Storm. You gotta be in it to win it. Here’s to Storm Johnson putting up numbers that make him a potential flex option for the rest of the season. A guy can hope, right…?