I think it’s safe to say that the Dolphins… are not a good football team. Actually, they are pretty terrible. I mentioned in the Live Thread last night that there are usually two versions of the Bengals that show up in primetime games, a regular season version and a playoff version. Now, we got a little bit of both last night… and that’s probably too generous, but there is apparently just one version of the Dolphins, and I call it: “Oh god…” (I’m an atheist, for context.) I last time I’d seen that much incompetence by the color orange since the Presidential Debate. Despite the game being an amazing period of time to nap in, (yes, technically it was a two-score game… sort of like how Taco Bell is “technically” food), but I would like to point out that at the least the Bengals didn’t go full orange during the color rush epoch. They saved us from Dolphin orange on orange mixed with a darker Bengals orange on orange, which would have probably cause color blindness to all viewers. On the bright side, that much orange may have also been the cure to color blindness, so there’s that I guess. (To be fair, I did kind of like the Dolphins color rush uniforms, but I had a hard time remembering what college they played for…)

Kenny Stills – 1 REC, 74 YDS, 1 TD. How could you not see that Stills was running open down the field? He was practically glowing! Honestly, is it just me or did everyone else’s retinas hurt watching the game? Orange on orange violence is a tragedy everyone. Let’s remember that.

DeVante Parker – 2 REC, 20 YDS, 10.0 AVG. It’s going to be okay Parker owners. Everything is going to be fine. Trust me. Trust… Hypnodolphin. 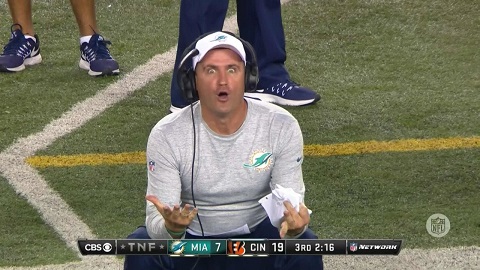 Just in case you need nightmare fuel or whatever…