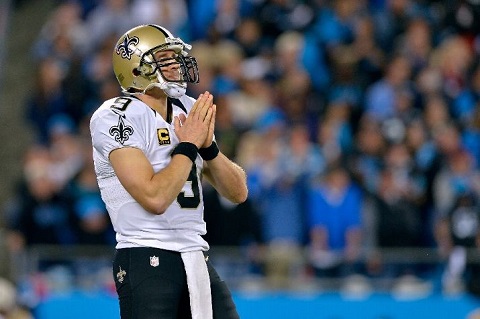 The wait is finally over folks. Despite a shaky start by our lord and savior, Breesus Christ, the true nature of the Carolina Panthers took over the game and made sure that the Saints broke out of their four-game road losing streak, and they now have a strangle hold over the NFC South. With a 4-4 record. Sigh. Mark Ingram put in another solid night, rubbing it in for all of us who drafted him two years ago. Thanks man. Speaking of thanks, Cam Newton did a well enough job, but that’s with the context of being pretty terrible, so yeah. He did a great job of being terrible. True, he was under duress for most of the night, getting sacked four times, which forced two fumbles. And yes, the Carolina offensive line is just really offensive without three of it’s regular starters. Not to mention the receivers had their fair share of drops. But hey, always look on the bright side. It could be worse, ya know? You could be the Tampa Bay Buccaneers…

Jimmy Graham – 7 REC, 83 YDS, 1 TD. That’s cute that they bothered to make a “Jimmy Graham is better than Greg Olsen” chart last night. I can’t wait to see their “sky is blue” chart.

Kenny Stills – 5 REC, 72 YDS. His line is fine, but if you watched the game, you came to the conclusion that if you’re in a league that gives points for bounced passes off of hands, Stills would be a first rounder.

Cam Newton – 10/28, 151 YDS, 1 INT and 7 CAR, 43 YDS, 1 TD. You could have made a decent snack meal by only using food items that have the same name as those who played in last night’s game. What I’m trying to say is, I would love a meal with just Fig Newtons, Breez-Its, and Graham Crackers.