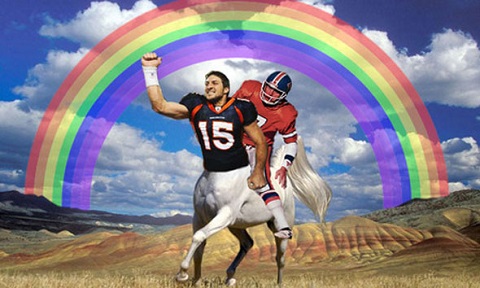 Except for 2010, the Chargers or Broncos have won the AFC West every year since 2004, and the other team finished second in seven of those years. Mainly because the Raiders are gonna Raider. The series, as a whole, has been quite the see-saw battle over the decades, starting back to their shared AFL days, all the way to the aforementioned 2004 season. You see, that’s when Philip Rivers came. Which would be the start of seven straight children. Get it? Also there were those nine victories in his first 11 starts against the AFC rival. However, the now Peyton Manning led Broncos have won five of the past six games, and he’s coming off a game where he threw his record-breaking 509th touchdown. While the Chargers defense is missing several key play-makers, most notably in the linebacker corps, and the defensive line, and the secondary, so pretty much everywhere, it remains to be seen if they can limit Manning to double-digit touchdowns. That being said, the Broncos were heavily favored in last year’s Thursday night game and managed to let Rivers and the Chargers offense drive the football in 25 minute increments, most likely a key recipe for tonight not to be a blow out. Just like how my recipe for tonight will be profound alcohol consumption and crying. Whether they are tears of happiness or tears of sadness, well, like always, that’s up to what kind of porn I watch after the game…

Take one sip if…

You wonder why Jack Del Rio still has a job coaching in the NFL.

Chargers have a meltdown.

Chargers – All the points.

Broncos – None of the points.