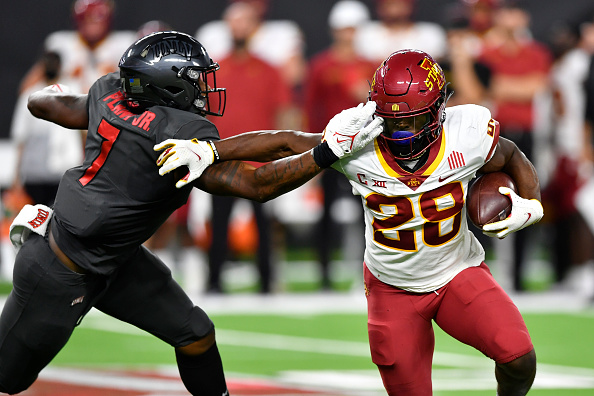 Stop the presses! I have made an update to my rankings. In my former life, where I was a mere consumer of fantasy football information, I used to wonder (sometimes aloud) “Why would a person need to update rankings when no games have been played?” It seemed like a logical question at the time. But now in my current life I, am a disseminator (sometimes provider) of Fantasy Football information. And my present self understands that many things can cause a ranker to update her/his rankings beyond on-the-field gameday production. For example injuries, new contracts, discussion and debate with others in the industry, and practice/camp performances can all change how a writer will assess a player’s fantasy value. Here is an update hopefully before your league’s draft.

1. Breece Hall | RB | Jets – Selected early in the second round of the NFL draft this is my no doubt 1.1 for all rookie dynasty drafts. Breece is set to take over as the primary running back for the Jets of New York. Last year’s 4th-round pick Michael Carter showed glimpses of stardom last season, but it’s clear the Jets do not view Carter as an RB1. Coaches worked in other backs last season like Ty Johnson and Tarik Coleman, neither of which has the talent and upside of Breece Hall. I expect the former Cyclone to take over at least 60% of the running back work for the Jets this season.  He will be running behind a solid offensive line and a developing QB, which should equate to plenty of opportunities. Michael Carter won’t disappear. Carter will (and should) get at least 8-15 touches per game, but make no mistake, this is Breece Hall’s backfield now and in the immediate future.

2. Treylon Burks | WR | Titans – Ranking stays the same. Treylon’s asthma condition is preventing him from participating in practices, but I’m a firm believer in Burks. He played a lot from the slot receiver position in college at Arkansas, but his skills lend well to the outside receiver position. Burks is a big-bodied receiver who is fast enough to get by defenders on the deep routes, and strong enough to produce big yardage after the catch on the short routes. His predecessor A.J. Brown excelled at go routes and crossing patterns, and I see no reason why Treylon cannot create a close approximation of Brown’s production on those plays. Could lead the Titans in targets this season which should make him a top 20 WR in 2022.

3. Chris Olave | WR | Saints – I bumped Olave up a spot from my previous ranking. The dude is a speed demon who glides across the field with relative ease. Chris was the first to separate himself from a talented group of receivers including draft-mates Garrett Wilson and Jameson Williams at Ohio State. Olave plays with extreme confidence he appears to have the demeanor of a guy jogging effortlessly in the morning through a dew-dampened park. He understands spacing on the field. Easily accesses his top-flight speed and can spot on a dime while making an incredible catch. I almost expect him to yawn after making one of these great grabs. Say what you will about Michael Thomas, but he has had injury issues, been out for a while, and suffers from general boneheadery. Chris Olave and Jamies Winston might surprise some people this season, in what I think will be a fun division to watch.

4. Drake London | WR | Falcons – London dropped a spot, but that’s not on him. I wouldn’t argue with you if you had the former USC receiver as high as two on your list. London plays like a power forward fighting for rebounds. He is an unyielding threat in the red zone. London battles through defenders to make catches that will drop your jaw. He’s also a big athletic guy who should find success as an outside receiver. The Falcons will be fun to watch with 4 large athletic players in: Kyle Pitts (6′, 6″ 245lbs.), Cordarelle Patterson (6′, 2″ 220lbs.), Marcus Mariota (6′, 4″ 225lbs.), and Drake London (6′, 4″ 220lbs.).  Atlanta might be better than many people expect.

5. Garrett Wilson | WR | Jets –  Wilson will have to learn how to produce in the pros with an unproven Quarterback- which is a difficult curriculum. The Jets have given Zach Wilson all the talent he needs to succeed. He has a possession receiver in Corey Davis (last season’s big free-agent signing), a couple of good running backs in Breece Hall and Michael Carter, a slot receiver in Elijah Moore, a good offensive line, and an all-around talent in Garrett Wilson. It’s really all on the Zach attack this season for Gang Green. My guess is that Wilson, G will provide fantasy production if Wilson, Z has a successful season.

6. Jahan Dotson | WR | Commanders – I feel a little vindicated on Dotson. I had ranked high in pre-draft lists and was very aggressive with his initial ranking post-draft. The industry seems to be coming around on Dotson. Perhaps it’s the glowing reviews emanating from OTAs and practices that have caused their change of heart. Maybe it was the uncertainty of Terry McLaurin’s future in Washington, and now that he has signed a new contract they will push Jahan down their boards again. I will not be moving Dotson anywhere. I believe him to be better than Curtis Samuel and I expect the former Nittany Lion to acquit himself quite well in the nation’s Capitol. Diontae Johnson with better hands? Maybe.

7. Jameson Williams | WR | Lions – This is as high as I am willing to rank the former Alabama wideout due to the ACL injury he sustained in the College Football Playoffs. Jameson is probably going to miss at least part of the 2022 season. He will need to make up ground from all of the missed practices and make sure he is fully recovered before returning to the field. Head Coach Dan Campbell would never give up on a season, but in reality, he understands that the bulk of Williams’ production will be found in future seasons. Williams has a top 20 receiver upside, but we are a few years away from that happening.

8. Kenneth Walker III | RB | Seahawks – Eight may seem a little low to those of you who scour the internet for rookie dynasty draft information (like me). The former Spartan is ranked 4th consensus, so I will have few (if any) shares of Kenneth Walker III. It’s really nothing against Walker. I love his speed, elusiveness, and break-away ability. I also respect Kenneth for betting on himself and transferring to Michigan State where he turned his career around. I just really do not like the landing spot. Rashad Penny was a great running back down the stretch. And the powerful Penny makes a perfect complement to the speedy Walker. I recognize this smell and it is the reek of a timeshare. Not that Kenneth Walker cannot produce good numbers in a timeshare. There will be great times when the place is his.  Are those great times enough put him over these enticing receivers? Obviously not for me.

9. Christian Watson | WR | Packers – A player who moved up a little from my previous rankings. When it comes to Watson’s ranking, it’s elementary – as in measurements – 6′, 4″ 210lbs., runs a 4.36 40-yard dash and leaps a 38.5 and 136 broad jump! This kid has elite athleticism. But, coming from a small school where he wasn’t always on the field, he just doesn’t have the production. Watson is the ultimate wildcard in this class, which explains his ascent on my list. I want that Wildcard! I want to swing for the fences with my first-round pick. I go for the highest upside I can find; and with those physical traits, Watson is basically that last half-drunk swing of the slow-pitch softball season. The one that spins you into the dirt and is the answer to your question “why am I so sore?” in the morning.

10. David Bell | WR | Browns – Measurements and athleticism scores do not favor David Bell. Fortunately for us, fantasy football championships aren’t won in the training room, they are won with on-field production, and Bell offers plenty of it. The former Boilermaker put up elite receiving numbers early as a true freshman. With few proven players ahead of him on the Browns’ depth chart, David might just repeat that early success in Cleveland. Amari Cooper should step in as the WR1, but I like Bell’s odds to take that WR2 from the more athletic but less accomplished players like Donovan Peoples-Jones and David Njoku. The operative question is “who will play quarterback for the Browns?” That’s really what is comes down to for Bell. If he gets Watson (for even half the season) he is worth this pick. I believe there’s a good chance he plays well with Watson and becomes a part of the future game plan in Cleveland. If Watson is suspended for the entire season, Bell has less of an opportunity to shine with a worse QB. If that were to happen one could easily see the Browns re-stocking the receiver room in 2023, which leaves no guarantees for the third-round pick.

I just can’t get on board with Olave….I think he’s good, but he has #2wr all over him to me….nothing stands out as a potential stud….unlike Jamison Williams, Garrett Wilson, and Christian Watson! I don’t expect those 3 to be the top 3 wrs this season…..(Burks & London) have much better year 1 situations) but I’m a dynasty guy….I Want the fantasy top 5 wr in 3 years from now….and fully believe the saying that “the cream eventually rises to the top,” btw…I hope you’re wrong about Bell….I own Peoples-Jones & Njoku….now we just need this Watson cash-grab to get resolved!!

Hey Derek,
Thank you for reading! I respect you for being consistent. Going for the highest upside and best athlete (DPJ, Njoku, Watson, etc…) will often work out the best.
I like Olave because of his tape. He is just so damn smooth out there.
Keep the comments coming Derek. I can tell you know your stuff.
PB12