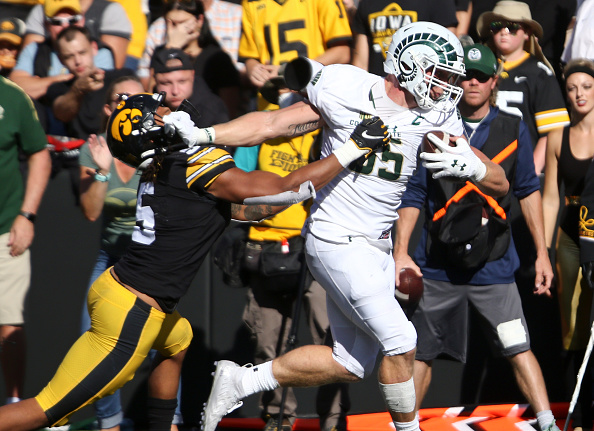 IOWA CITY, IOWA- SEPTEMBER 25: Tight end Trey McBride #85 of the Colorado State Rams fights off a tackle during the first half by linebacker Jestin Jacobs #5 of the Iowa Hawkeyes at Kinnick Stadium on September 25, 2021 in Iowa City, Iowa. (Photo by Matthew Holst/Getty Images)

Sometimes it is easy to forget just how much change has occurred at the tight end position over the years. Just for a point of reference, I began playing fantasy football in 1998. Titanic won the Oscar for best picture. A movie that we all already knew the ending to – the boat sinks. Elliott Smith released what’s become one of my favorite albums, “XO”. And the Tennessee Oilers’ (yes, that was their name at the time) Frank Wycheck led all Tight Ends in receptions that season with 70 catches. Ben “Winter” Coates was second on the list with 67. Neither failed to eclipse 800 yards and they totaled 8TDs between the two of them.

Times have certainly changed. The best picture in 2022 went to CODA, a movie that is anything but predictable. Elliott Smith has been dead for almost 9 years. And thanks to photoshop, all ends are tight. In 2021 five Tight Ends caught 70 or more passes: Mark Andrews, Travis Kelce, Dalton Schultz, Mike Gesicki, and George Kittle. Four gained over 900 yards receiving: Andrews, Kelce, Kittle, and Kyle Pitts. Fantasy managers risk losing significant production by ignoring this ascending position.

The 2022 class lacks a pinnacle player like Kyle Pitts. None of these players will be drafted in the top 5. I don’t expect any of these guys to sign 30-million-dollar contracts, either. The 2022 class does offer a group of auspicious players though. I plan to target 1-3 players from this group as I build my roster. Here’s how I stack them up.

1. Trey McBride 22 | 6′, 4″ 246lbs | Colorado State – McBride is head and shoulders above the other players on this list. Trey is an excellent pass catcher and an adept blocker. Many mock drafts have him falling to the 2nd round, but I doubt he drops that far. He displayed impressive body control and made many acrobatic catches along the sideline as a college player and at the NFL Combine. The well-rounded end (phrasing!) features a feisty stiff arm and is great after the catch. Colorado State ran a very creative shovel pass play, that essentially functioned as a handoff to McBride, to great success. He’s a competitor who rarely left the field, even appearing on special teams for the Rams. The winner of the John Mackey Award honoring the best Tight End in college football, this kid from Greeley, Colorado caught over 90 passes for more than 1,000 yards receiving in 2021. He was mysteriously held to only one touchdown. I’m betting the lack of TDs is an anomaly. If you’re checking out Tight Ends in the 2022 fantasy draft, get a load of the butt on Trey.

He must work out.

2. Jelani Woods 23 | 6′, 7″ 260lbs. | Virginia – Big dude who is dangerous after the catch. Austin Allen is the tallest of the bunch, but Allen is lean and lanky; Jelani Woods is big and burly. He is a runaway bull after the catch, bucking and breaking would-be tackles as he careens across the open pasture. Woods uses his size and athleticism well when blocking. He can stand up defensive ends as an in-line TE, and he can run down DBs blocking on outside screens. His Combine Composite score puts him in the upper echelon of TEs. Woods could be the steal of the draft. You may be able to select him late in a draft, or maybe even on that first FAAB run of the after the draft, whatever the case may be, target this player.

3. Greg Dulcich 22 | 6′, 4′ 243lbs | UCLA – A skilled receiver who breaks out of his routes quickly and consistently created separation from defenders at the college level. Dulcich is a long strider who can get past defenders on the deep ball. The former Bruin is not much of a blocker and will rely on his receiving skills to make a living in the NFL. His poor blocking ability may keep him off the field in key short-yardage situations. Greg is a good receiver, but not good enough to tailor an offense around like Kyle Pitts. This is the type of Tight End you want to roster in fantasy because his blocking deficiencies don’t affect our game that much.

4. Jalen Wydermyer 21 | 6′, 4″ 255lbs. | Texas A&M – A consistent producer with the Aggies, Wydermyer averaged 40 catches for 490 yards and 5.5 TDs over his three-year career. That production puts him among the best of his peers. I am not a fan of his tape. I noticed a few lazy plays. The former Aggie gave a half-hearted attempt at blocking the backside on a few runs, which doomed those plays. The effort was not lacking when he was one of the primary targets, or when a run went his direction, so I expect NFL coaching and the harsh realization that this game is how he puts food on the table, to change that.

5. Isaiah Likely 22 | 6′, 5″ 245lbs. | Coastal Carolina – Likely was recruited by some schools with intentions to play him at wide receiver, but Isaiah chose Coastal Carolina and became a good pass-catching Tight End. He was a big-time playmaker for the program and was instrumental in their recent success. The team that drafts him might be wise to avoid using him as a blocker, which would limit his share of snaps. He racked up nearly 2,000 yards and 22 TDs on 1201 catches over the past three seasons at Coastal Carolina. Like Dulcich above, Likely is the type of Tight Ends fantasy players want to roster.

6. Austin Allen 23 | 6′, 8′ 255lbs. | Nebraska – A big guy who stood out even in a Big 10 Conference populated by giants. Long and lean, Allen had to work hard to build muscle on his slender frame. For such a wiry guy Austin is a decent blocker and displays the effort necessary to improve. A smart player who fooled many linebackers by faking blocks and slipping out into the open for big plays. A magician on the sideline, Austin shows great body control for a lanky player. Might be obvious and needless to say, but he is good at the jump ball. A slow plodder evidenced by his 4.83 40-yard dash at the combine. Allen was often schemed open by Husker Head Coach and primary play-caller Scott Frost. Allen may have issues separating from man coverage in the NFL. What Allen lacks in straight away speed he makes up for in quickness (7-second three-cone drill), so there is plenty of promise in this prospect. A local kid (Aurora, Nebraska) who made the hometown fans proud by becoming a team captain and winning the Big Ten Tight End of the Year Award in 2021. You could do worse with your last pick in the FYPD.

7. Jake Ferguson 23 | 6′, 5″ 250lbs. | Wisconsin – A local four-star recruit who fulfilled his promise and became a key cog in Wisconsin’s offensive machine. Ferguson comes from a football family, his father played for the Nebraska Cornhuskers and his brother played Safety for the Badgers. A great receiver who led a limited passing attack in receiving yards for the 2021 season. Jake isn’t your typical Wisconsin Badger road grater run-blocking Tight End. He’s not much help in the blocking game, but a quality pass-catcher who could reach a higher ceiling with improved Quarterback play. An interesting sleeper in this TE class.

8. Jeremy Ruckert 21 | 6′, 5″ 250lbs. | Ohio State – A top 50 (37th overall according to 247Sports) recruit in the 2018 class. Jeremy may have been under-utilized at Ohio State. The Buckeyes were loaded (still are) with NFL talent at Wide receiver, so Jeremy’s efforts went largely unnoticed, but he is a good player. A quality blocker who shows strength and aggression at the point of attack. He’s a little stiff as a route runner, but his speed and strength measure up with the best at the position. Could become a much better player as a pro than he was as an amateur.

9. Charlie Kolar 23 | 6′, 7″ 252lbs. | Iowa State – I like this player. His parents are both professors at the University of Oklahoma. He won the William V. Campbell Award which is the Academic Heisman in 2021. Smart players get better. He ran a 4.6 forty-yard dash at his pro day. Needs some work on his blocking, but has the size and effort to improve. The Cyclones had two quality TEs in 2021. Kolar and Chase Allen (ISU had to out-recruit Nebraska and Michigan for Allen’s commitment, and he will be drafted or signed as a UDFA), but Kolar was able to distinguish himself from the completion catching over 60 passes for more than 750 yards. A great late-round value pick.

10. Cade Otton 23 | 6′, 5″ 247lbs. | Washington – Cade comes from a family of football coaches. His Grandfather and Father coached high school football in the state of Washington the elder being a legend in the state. And the apple didn’t fall far from the tree. Otton is a smart player who is great at getting open. He is probably the best in the class at finding and settling into open spots against zone coverage. The former Huskie has great hands and is a reliable outlet for his Quarterback. Like many of these players, he needs to work on his blocking, but Washington asked him to block a lot, so it is not a foreign concept to him. He, Kolar, Ferguson, and Ruckert fall into a vortex of value at the end of the draft, or maybe the first FAAB run. I will not be surprised if Otton becomes a starter for an NFL franchise in the not-too-distant future.

11. Chigoziem Okonkwo 23 | 6′, 3″ 238lbs. | Maryland – An explosive athlete who wowed scouts by running a 4.5 forty-yard dash at the combine. He plays a little robotic for me. Nothing looks natural for him on the field and I didn’t see that blazing speed show up during games. He shows the tenacity and effort to develop as a blocker. Makes for an interesting H-Back prospect.

12. Daniel Bellinger 23 | 6′, 6″ 253lbs. | San Diego State – Bellinger tested well at the combine recording a 4.6 40-yard dash, putting up 22 bench reps of 225lbs. and nothing a 3-cone time of 7 seconds. His routes lack fluidity, but he battles for receptions through coverage and his athleticism aids him in his endeavors. A passable blocker, but needs to display more ferocity and finish. All the tools are here and the right coach could build a solid NFL tight end out of Daniel Bellinger.

13. Cole Turner 23 | 6′, 6″ 246lbs. | Nevada – Turner has a long way to go before he becomes an NFL Tight End. He’s a former receiver who needs to add strength. I wouldn’t expect much as a blocker, but that’s not damning in the Fantasy Football faith. A long shot, but this is the prototype.

14. Derrick Deese Jr. 23 | 6′, 4″ 235lbs. | San Jose State – The son of former San Francisco 49ers Offensive Lineman. Deese the younger began his college career as a wide receiver and switched positions to Tight End. His father’s ferocity was passed down to Derrick, unfortunately, Dad’s technique was not. Deese Jr. needs to work on hand placement to improve his run blocking. The former wideout is comfortable in the passing game and makes for a decent dart throw.