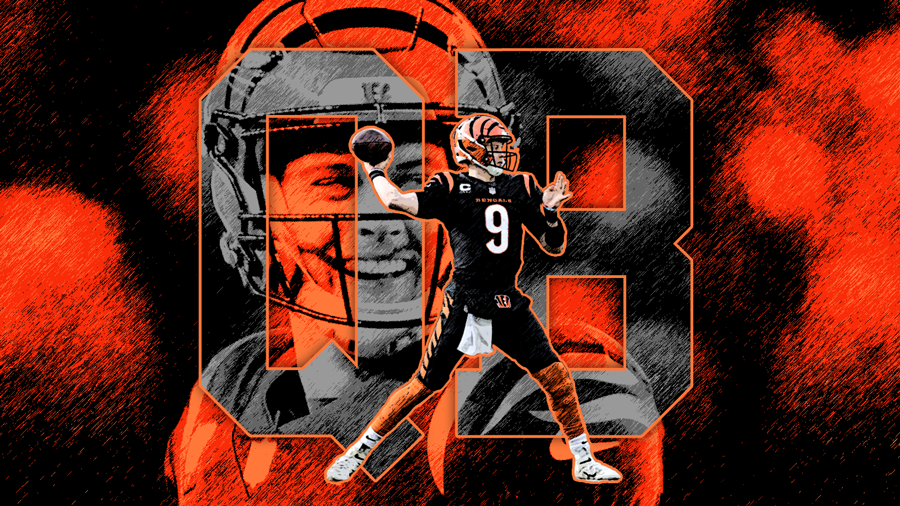 We have finally reached the end of the slow burn that was the 2021 NFL season, the longest in history, but I am stoked for the playoffs. With the regular season in the books, It’s an opportune time to finish up the top 40. I will be putting out player ranking by position in the weeks to come. Players ranked 26-40 offer a great collection of talent, and a few of these stars will reach the top 25 next season, so this is a good group to get to know.

26. Tee Higgins | 22 | WR | Bengals – 3rd Bengal in the top 40, and we haven’t gotten to Joe Burrow yet; future dynasty in Cincy? Hold that thought for now, but I will be glued to the TV for every Bengals playoff game. Higgins is taller, 6′, 4″ 215lbs than basically everyone who attempts to cover him. He’s also earned the trust of QB Joe Burrow, who is not afraid to give his WRs a chance on a 50/50 ball, and Higgins likes those odds. Tee tested poorly in the underwear Olympics portion of the scouting process. He declined to participate in the NFL combine and posted poor numbers at his pro day. NFL scouts began to question Higgins’ athleticism. The Quarterback turned Wide Receiver has answered those questions by getting open against NFL defenders. Tee Higgins has 2,000-yards receiving and 12 TDs in his first two NFL seasons. There is plenty left in Tee’s tank, so get on board now.

27. Javonte Williams | 21 | RB | Broncos – Javonte will be the darling of the fantasy football world in the 2022 season. Melvin Gordon’s contract with Denver will expire in 2021, leaving Williams as the bellcow back for the Broncos. This former Tar Heel is a bully back who would rather run over defenders than around them. His receiving skills need improvement, but he has shown progress. Williams caught more passes each year in college, increasing from seven to 13 and finally to 25 catches, and he has already caught 41 passes in his first year in the NFL. This Bronco back is primed for a solid run the next few seasons and could jump into the top 25 or higher on next year’s list.

28. Antonio Gibson | 23 | RB | Football Team – Gibson has the physical gifts to become a star in the NFL. He’s 6′, 2″ 220 lbs, runs a 4.39-second 40-yard dash, and is a versatile player with experience as a WR and RB. Antonio has provided solid production since he joined the league in 2020 and has an opportunity to reach the 1,000-yard mark in week 18. A change from Washington in play-calling and a better QB would go a long way towards moving Gibson up this list.

29. Joe Burrow | 25 | QB | Bengals – Smoking a fat stogie in a crowded room is a sign of supreme confidence. This is a privilege typically reserved for new fathers and mafia kingpins; the self-satisfied smokestack basks in glory as they force an entire room of people to smell their putrid accomplishment. Joe Burrow has that confidence, but you don’t need to see him suck down a cigar to realize it, just watch him play. Burrow is the 4th Bengal in my top 40 dynasty players, so he has plenty of help around him. I expect the team to continue to invest in offensive linemen to keep Joe protected from injury, and at this point, injury is about the only thing that could slow down Joey B. Enjoy it Cincinnati, you finally have a winner.

30. David Montgomery | 24 |RB | Bears – Montgomery might be the most underrated player in football. This is where I would typically delve into the details and reasons that support my opinion, but I think it’s best to leave it to a Bears fan. I asked a close friend of mine, who happens to be a fan of the Chicago Bears, about David Montgomery’s fantasy outlook entering this season. This was his response (Paraphrased for time and space considerations: “Picture if you will, a world where you finish as the number 6 RB, only to find that the next year people start questioning your “upside” and “situation”. You finished T-5 in rushing yards, with zero rushing fumbles despite having the 4th most carries. You had the 4th longest run from scrimmage in the league, yet they talk about your lack of “breakaway speed”. Would this logic upset you? Would it make you play with a chip on your shoulder? Would it even, dare say, piss you off more than words can express? Imagine how David Montgomery feels… This whole idea of Montgomery being RB 18, which is his current average ranking, is so ridiculous I just want to scream obscenities from the rooftop. This is a guy who is going into his 3rd year in the league, so he’s still plenty fresh, has shown he can run AND catch his way to yards and points and is right on par with so many of the so-called fantasy darlings at the same position… I have a hard time with things that don’t make sense, and after looking deeper, this makes even less sense than it did when I started. Do yourself a favor, grab the kid around RB 8 or 9 and write me a thank you letter when you win your league this year…” – Dave Anderson, Bears Fan (and darn good writer, too).

31. Kyler Murray | 24 | QB | Cardinals – Murray was a two-sport athlete during his amateur sports career, participating in baseball and football, and it shows in his play as an NFL QB. Murray looks like a shortstop playing QB at times, which is a good thing. He can make accurate throws on the run and from different arm angles. Kyler side-steps blitzers like a Shortstop turning a tailor-made 6-4-3 double play, and he avoids taking big hits with expert slides at the end of evasive runs. Even the team he plays for shares a name (Cardinals) with one of the most iconic franchises in baseball; Murray’s stats, 11,480 yards, and 70 TDs passing, 1,786 yards, and 20 TDs rushing in his three year NFL career, have fans dreaming of Musial-esque career.

32. Kyle Pitts | 21 | TE | Falcons – His production this season has been inconsistent, but the end of the season numbers were astounding for a rookie Tight End. This former Mackey award winner for best TE in College Football caught 68 passes for 1,026 yards in his inaugural NFL season. The only category that suppressed his fantasy value was touchdowns. Kyle caught only one TD in 17 games this season; I think we can safely assume that TD number will increase in future seasons. Pitts is a special athlete who forces defense into unfavorable matchups. I’d be looking to acquire Kyle Pitts via trade, as 2021 likely represents the nadir in his long career.

33. James Robinson | 23 | RB | Jaguars – An efficient North/South runner who gets the most out of his ability. Robinson beat the odds as an undrafted rookie free agent to become the Jaguars starting running back and best player on offense in 2020, putting up 1,400 total yards and 10 TDs. In 2021 Robinson disappointed fantasy managers looking for a repeat of 2020. He failed to reach 1,000 yards rushing, settling for 767 yards and caught 14 fewer passes than he did in 2020. I am more likely to give Jaguars players a pass on 2021, the wallow in the Meyer. Some of Robinson’s 2020 numbers are promising – He averaged 4.7 yards per carry and was one of the most efficient runners in the league, ranking 8th in the category according to NFL.com NextGen Stats. James Robinson still offers plenty of upside, and some sensible coaching should help draw out his potential.

34. Stefon Diggs | 28 | WR | Bills – With Antonio Brown absorbing the media attention this week, take a moment to remember that Brown vetoed a trade from Pittsburgh to Buffalo. If Brown, the enigmatic receiver, had gone to the Bills, he could have been Josh Allen’s primary target, and Diggs would likely be on a different team. Antonio’s loss has become Stefon’s gain. Diggs has eclipsed the 1,000-yard receiving mark in his past four seasons, the last two in Buffalo. Stefon’s speed and route-running ability have turned him into a human cheat code of sort, he is always open, and Josh Allen looks to him often. He remains under contract with the Bills for the next two seasons, so expect similar production for at least two more seasons.

35. Travis Kelce | 32 | TE | Chiefs – The only player in my top 40 over 30 years old is the unquestioned best player at his position. I don’t know how much longer Kelce can keep up his elite production, but with Andy Reid calling plays and Patrick Mahomes throwing passes, Kelce could remain king of the TEs for a few more seasons.

36. Mark Andrews | 26 | TE | Ravens – Kyle Pitts has the upside, Travis Kelce has the production, but Mark Andrews might be the best value. Only 26 years old and the top target in an improving passing offense, Andrews had a career year in 2021, accumulating 107 catches for 1,360 yards and nine touchdowns. Expect this 6′, 5″ former Oklahoma Sooner to continue his stay on the top of the Tight End list for the foreseeable future.

37. Diontae Johnson | 25 | WR | Steelers – This former Toledo Rocket is on a trajectory to become one of the top receivers in the game. His ascent to the wide receiver stratosphere is due to a healthy dose of targets (405) in only three seasons. Diontae has been an inferno this season, scorching defenders on his way to career highs in receptions (107), yards (1,160), and touchdowns (8). The million-dollar questions of the Steelers offseason will be “who will replace Ben Roethlisberger?” and the answer to the questions is paramount for Johnson’s fantasy viability.

38. Terry McLaurin | 26 | WR | Football Team – “Scary” Terry McScorin’ makes it two players for the Football Team in the top 40, which begs the question, “did they underachieve this season?” The answer is, “yes, and it is likely due to regression on defense and questionable play at the most important position in football, Quarterback.” Keep an eye on the happenings in D.C. this offseason. Be prepared for an offseason spike in McLaurin’s fantasy stock when Washington acquires a new field general.

39. Ezekiel Elliott | 26 | RB | Cowboys – 9,630 total yards and 68 touchdowns in 6 NFL seasons. Even though it seems like Elliott has been in the league forever, he is only 26 years old and has another five seasons remaining on his contract. Dallas Cowboys Offensive Coordinator Kellen Moore seems to have settled on Zeke’s role on the offense. That role produces around 1,000 yards rushing and 45 receptions per season—the touchdowns will always fluctuate, but these statistics represent solid RB production in the current constructs of the position.

40. Elijah Mitchell | 23 | RB | 49ers – The best value pick from last year’s draft takes the final spot in the top 40. The starting running back spot on one of the best rushing offenses in football was wide open coming into 2021. Raheem Mostert was in the final year of his contract, and the 49ers had drafted their running back of the future, just not the one I had expected. I was all in on Trey Sermon, going as far as trading my 1st and 2nd round picks in 2022 to acquire him. As we all know, Sermon failed to deliver, and Mostert injured his knee, creating an opportunity for the best-kept secret of training camp, Elijah Mitchell. A 6th round selection from Lousiana College, Mitchell impressed coaches with his blazing speed (4.35 40-yard dash) and vision. The unheralded rookie proved those coaches correct by rushing for 963 yards (2nd most by rookie RBs in 2021) mostly against stacked defenses fronts with eight or more defenders in the box, ranking in the top ten of that category. Injuries were an issue as he sat out six games in 2021. Elijah is not a big back measuring in at 5′, 10″ 200 lbs, so injuries may be a problem that persists throughout his career, so proceed with caution.