With training camps starting up this week, it’s time to get defensive!

“Wait, defense??? You mean those nameless guys that try to stop my running backs and wide receivers from scoring fantasy points?”

Yes! Well, sort of… Believe it or not, there are those of us so depraved that we actually play in fantasy football leagues that include Individual Defensive Players (IDPs); With this first set of rankings, we’ll focus on the heart of those IDP rosters, the linebackers. With linebackers, much like running backs (perhaps even more so), you should focus on full-time players who rarely leave the field. Generally, more snaps = more opportunities to produce statistics, a.k.a. fantasy points. These rankings will reflect just that.

“Yeah, yeah, I get it. I should roster LBs who play a lot… not exactly rocket science, pal. Just tell me who they are! Name names!” 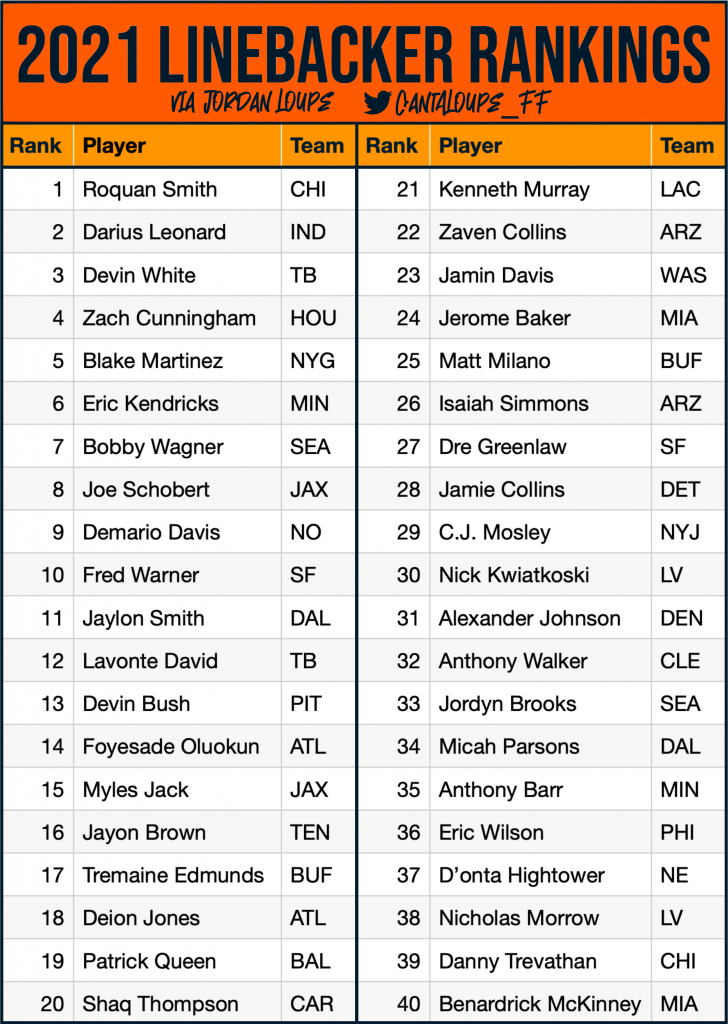 Note: these rankings do not include 3-4 OLBs, so before you carve TJ WATT LB1 into your pitchforks, please note that those players are typically pass rushers, and therefore will be listed on DL/EDGE rankings in another post.

Of course it’s still early, so there is sure to be plenty of movement on this list as we gain more information this preseason. In fact, over the next few weeks, there are a handful of training camp battles I’ll be keeping close tabs on, and I’ve outlined two of the best linebacker competitions below.

In 2020, Defensive Coordinator Brandon Staley relied on only one inside linebacker to play a full-time role, and when healthy, that player was Micah Kiser. The University of Virginia product was forced out of action in Week 11 vs. Tampa Bay, and would miss the rest of the regular season, opening the door for Troy Reeder to become the every-down LB. Kiser finished the season with 77 tackles across his 9 starts, while Reeder tallied 81 stops in 16 games, 60 of which came after Kiser went down.

Fast forward to 2021, and Staley is still in Los Angeles, but in a new position as Head Coach of the Chargers. Replacing him as Rams’ Defensive Coordinator is Raheem Morris, who based on history, is likely to deploy two full-time LBs. It remains to be seen, however, who those two players will be. Morris has no connection to Kiser or Reeder, so it’s not a given that their 2020 seasons will translate to 2021. Here are three additional names to keep an eye on:

Travin Howard appeared to be the front-runner in training camp last year until he was lost for the season due to a torn meniscus. His ability in coverage could provide him the opportunity to be a starter in 2021, so long as he is fully recovered. Another returning player is Kenny Young. The former Raven was included in the Marcus Peters trade, and has shown flashes as a rotational player in his time in Los Angeles, but has lacked consistency. There is one new face in the Rams’ LB room, as GM Les Snead spent a 3rd Round pick on Ernest Jones out of South Carolina. Even if he isn’t ready to start Week 1, there is a strong possibility that he earns more snaps as he progresses through the season. Jones carries the highest draft capital entire linebacker group, so given their investment, expect him to be involved as soon as he’s ready. Five players fighting for two spots should make for a great battle over the next several weeks.

Mack Wilson was the presumed LB1 for the Cleveland Browns heading into the 2020 season, but a hyperextended knee in training camp forced the former Alabama standout to miss the first month of the season. In his place, Defensive Coordinator Joe Woods turned to newly signed free agent (and journeyman) B.J. Goodson to wear the green dot for his defense. The ex-Giant/Packer would go on to have a career year, leading the Browns with 91 combined tackles. There was no other full-time starter at the linebacker position, even once Wilson returned to the lineup. Instead, it was a committee approach behind Goodson, including Wilson, Malcolm Smith, Sione Takitaki, and rookie Jacob Phillips. While there were high expectations for the youngsters on the roster, it was actually Smith who played the most snaps of this group (52%) on route to 72 combined tackles, by far his most productive year since his time in Oakland in 2015-16.

Looking forward to 2021, Goodson has departed, leaving 848 snaps up for grabs. Every other major contributor at linebacker from last season remains on the roster, and while that already makes for a crowded room, there are two additions to the group likely to play key roles this year. The first of which is Anthony Walker, newly signed from the Indianapolis Colts, where he played the Robin to Darius Leonard’s Batman. At only 25 years old, Walker provides a great mix of youth and experience, having posted no fewer than 92 combined tackles in each of the last three seasons in Indy. Unless Jacob Phillips takes a major step forward from his rookie year (certainly possible), Walker appears the most natural fit to replace Goodson in the middle of the defense, with a committee behind him, led by Phillips.

Perhaps the most exciting member of this group is Jeremiah Owusu-Koramoah, who surprisingly fell to the Browns at pick 52 in the 2nd Round of the 2021 NFL Draft. Widely regarded as one of the steals of the draft, it’s still unlikely that JOK is an every snap LB in his rookie season. Instead, look for the for the Notre Dame product to be used in a variety of ways, as Joe Woods tries to figure out the best fit for JOK’s diverse skill-set. With Walker and JOK, plus the additions of Jadaveon Clowney, John Johnson III, and Grant Delpit returning from injury, the Browns defense will be one of the more fascinating groups to watch in 2021, with plenty of fantasy points to go around for your IDP rosters.

Thanks for reading, and stay tuned as more rankings are revealed in the coming weeks!

To not include TJ Watt is dereliction of duties.

See text below the chart.

Any reason why Singleton is not included? You rate Wilson higher?

I think it’s a competition for playing time with Wilson, Singleton, Davion Taylor, Shaun Bradley, and TJ Edwards. Wilson has familiarity with the defensive coordinator and his scheme, so I think he’s the safest to win one of those 3-down roles out of any of these guys. Had a really nice year with the Vikings last year when he took over for Anthony Barr.