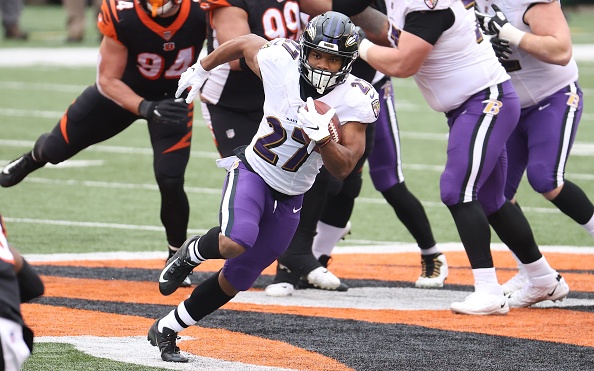 Every year we get burned by fantasy football players we expect to produce for us at a high level. Whether it be from injury, COVID list inactives, suspensions, or simply underperforming and losing playing time, it’s important we review each season from a bird’s eye view in addition to our granular approach. Some players just flat-out bust. Others don’t return our expectations but have given us seasons’ worth of production we can revert back to in hopes of last year’s underwhelming performances being an outlier.

Listed in this article are my Top 5 running backs I’m willing to take a chance on again in 2022 even after a disappointing 2021. You might consider these players “bounce back” candidates.

Christian McCaffrey (CAR): This might seem silly to mention, but some fantasy drafters are still nervous about drafting CMC. I get it, he’s missed 18 games over the last two seasons with four injuries, but he’s also been elite in the limited time he’s played during that time. In 2018 and 2019 he was the RB1 overall. In the five games he played at least half the snaps, he averaged over 20 fantasy points which only Jonathan Taylor and Derrick Henry were able to do. The Panthers brought in Baker Mayfield and improved their offensive line both in free agency and the NFL draft. All running backs have injury risk. It’s the nature of the position. However, few (if any) hold the upside CMC does. Let’s not forget Dalvin Cook missed most of his first two seasons with injuries. He’s now a perennial Top 6 RB off the board. Taking Taylor over CMC makes sense and I guess you can make a case for Cooper Kupp or Justin Jefferson depending on league settings, but there’s no chance I’m letting CMC fall out of the top three picks should I have that option on draft day.

Saquon Barkley (NYG): Another name that may seem obvious on this list is Saquon, but like CMC, two years of scars can be difficult to heal from. Barkley has trended in the wrong direction since a phenomenal rookie year finishing RB3. He’s been RB12, RB116 and RB32 in PPR since. Obviously, these had to do with injuries. Last year was extra brutal because he actually played 13 games. So, most of the time, you probably played him if you drafted him which made matters worse as he underperformed weekly. However, I’m willing to give him one more chance. He’ll be a free agent after this season, so he’s playing for a contract with either the Giants or another franchise that has to buy into him for 2023. Now two years removed from a torn ACL, Barkley should see an improvement on his career-worst 3.1% breakaway rate (which is horrible). That means 3.1% of his runs went for 20+ yards in 2022. The Giants bolstered their offensive line and rank 18th according to Pro Football Focus heading into 2022. Last year they were one of the worst across the board. New York also brought in former Bills OC Brian Daboll to call the plays. A few running backs that flourished under Daboll are Reggie Bush, Jamaal Charles, Devin Singletary in the final five weeks of last season and countless eventual NFL starters during his time at Alabama. If Barkley gives us even 14 games this season, he could be a Top 3 RB in fantasy. He caught 91 passes as a rookie in 2018. That’s a cheat code for fantasy RBs. Let’s hope he stays healthy and returns to a potential RB1 overall candidate. He’s being drafted as the RB13 right now in the early 3rd Round. Just two years ago he was the first player selected after CMC. I faded Saquon last year and was glad I did. I won’t be in 2022.

Travis Etienne (JAC): Unfortunately, we didn’t get the chance to see Etienne as a rookie because he missed the season after a foot injury ended his year. However, year two looks promising for Etienne and the Jaguars as a whole. Trevor Lawrence made my Top 5 Quarterbacks Not To Forget article and the addition by subtraction of losing Urban Meyer can not be overstated. Etienne was college teammates with Lawrence at Clemson. They already have built-in rapport and Etienne has received glowing reports from camp. The only competition in the backfield would be James Robinson, but he’s returning from his own injury and a torn Achilles has proven to be very difficult to bounce back from; especially the following season. Etienne should see three-down usage and is a great pass catcher. His check-down potential alone gives him Top 15 upside. If the Jaguars can move the ball and score more efficiently this season Etienne should have a huge part in that. He’s risky, but who isn’t in the middle rounds for running backs? Etienne has upside most don’t in the “RB dead zone”.

J.K. Dobbins (BAL): Like Etienne, Dobbins lost his 2021 season to injury. Dobbins tore his ACL days before the season started which means he should make a full recovery and plans to be active in Week 1. Dobbins finished 2020 with nine rushing touchdowns from Week 11 on, which elevated him to an RB11 finish down the stretch. However, he only saw 24 total targets all of 2020. We know that if you’re not Derrick Henry, Jonathan Taylor or Nick Chubb it’s nearly impossible to be a Top 10 fantasy RB without pass game work. Luckily, the Ravens run the ball more than anyone in the NFL on a per-game basis. The Ravens’ offensive line ranks 17th according to Pro Football Focus heading into 2022 but gets a major boost with LT Ronnie Stanley returning after two seasons of injuries. With fellow running back Gus Edwards also healing from a torn ACL, Dobbins should be in line for a large workload from the first snap. J.K. will miss training camp after being placed on the PUP list, but this bodes well for his Week 1 availability. He’s not my favorite back to draft as an RB2, but few have the workload and touchdown upside Dobbins does in the Baltimore offense.

Kareem Hunt (CLE): Hunt missed half the season due to injury in 2021… noticing a theme with these running backs? Still, Hunt finished RB21 in PPR PPG. That’s splitting time with Nick Chubb and little to no passing game for the Browns to keep defenses honest. In 2020, Hunt finished RB8 in PPR sharing the backfield with Chubb. I don’t recommend Hunt in ½ PPR or standard leagues at his price point, but in PPR leagues he’s worth the RB30 price tag. In addition to his weekly upside in the passing game, the Browns brought in Deshaun Watson (assuming he plays) and host the second-ranked offensive line according to Pro Football Focus. There’s also a chance Hunt gets traded mid-season which could land you an RB1 in a feature role on another team. Don’t count on that, but that’s a nice perk that could find you with a boost down the stretch this fantasy season.

Ronald Jones (KC): Jones hasn’t exactly impressed since being drafted in the 2nd Round out of USC, but he had a very short leash in Tampa Bay. Former Bucs HC Bruce Arians has had a tendency to lean on veterans and leave little room for error with younger players and that was the case with ROJO during his time with the Buccaneers. Yes, Jones had fumbling issues and missed pass-blocking assignments, but instead of giving him the opportunity to work on those, he was quickly replaced. Now, Leonard Fournette revitalized his career coming over from Jacksonville two seasons ago and ROJO couldn’t compete with “Playoff Lenny”, but Jones now gets a fresh start in Kansas City. The Chiefs signed him in free agency and Clyde Edwards-Helaire hasn’t quite solidified the starting role either. ROJO outpaced CEH in rushing grades the last two seasons according to Pro Football Focus. Not surprisingly, CEH beat out Jones in receiving grades. So, I can certainly see a scenario where ROJO takes First and Second Down work along with goal line carries while CEH handles Third Down and Two-Minute Drill snaps for the Chiefs. CEH is being drafted as the RB27 and 73rd overall. ROJO is being drafted as RB40 and 124th overall. I’ll take the discount on ROJO every time.

Keeper Question
Which player would you keep, with round penalty associated with player:
Javonate Williams, RB, DEN (Round 3)
Travis Etienne, JAC, RB (Round 10)
Rashod Bateman, WR, BAL (Round 10)

Hey Fiend! Thanks for chiming in. Etienne here. I love Javonte like everyone else else, but Round 3 is tough with Gordon still around. Etienne looks great in camp and J Robinson is still not participating. Etienne’s upside in Round 10 is fabulous.