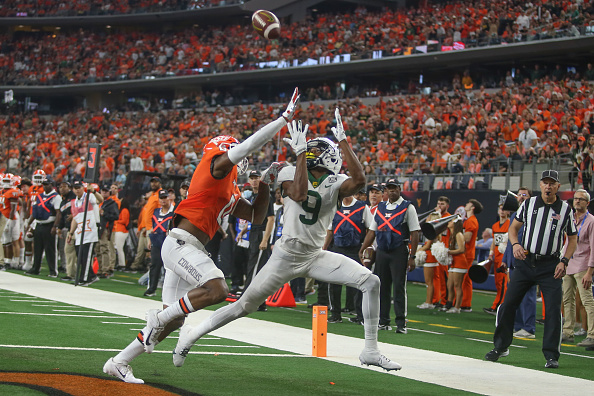 With the fiftieth overall pick in the 2022 NFL Draft, the New England Patriots surprised the draft community when they selected Baylor wide receiver Tyquan Thornton, a prospect who was widely considered more of a mid-round possibility. Surely, few fans and analysts had expected him to come off the board before prospects like Georgia receiver George Pickens, Cincinnati receiver Alec Pierce, and Western Michigan receiver Skyy Moore, all of whom were selected within four picks of Thornton. The choice invited even more scrutiny given the team’s struggle to draft receivers high in the past: names like Chad Jackson, Brandon Tate, Taylor Price, Aaron Dobson, and N’Keal Harry come to mind. So what made New England opt for the Baylor product over some of his more highly-regarded peers, and how does he fit what the Patriots are trying to do offensively moving forward?

A Miami native who originally committed to Florida before ending up at Baylor, Thornton spent four years in the Bears program, playing in three different offenses. Recruited by Matt Rhule, Thornton spent his first two seasons under co-coordinators Glenn Thomas and Jeff Nixon, finishing with a line of 20-354-3 (17.3) as a freshman before breaking out with 45-782-5 (17.4) the following year opposite Denzel Mims. His junior season, under new offensive coordinator Larry Fedora, was a forgettable one in which he left one game early and missed three others due to injury, finishing just fourth on the team in receiving before bouncing back in a big senior season in Jeff Grimes’ offense, leading the team in all major categories with 62-948-10 (15.3) to conclude his collegiate career, earning a trip to the Shrine Bowl in the process. It’s also worth mentioning that last season, Thornton was coached by former pro receiver Chansi Stuckey, who spent his career in similar offenses to New England’s. Because the Patriots run what is often regarded as one of the most difficult systems for wide receivers to learn, Thornton’s experience with Stuckey may be seen as a way of softening his learning curve and getting him onto the field sooner than some of the other prospects available.

Thornton’s overall physical and athletic profile is unusual; it contains a mixture of impressive and disappointing measurements. He’s tall (6’2 and 3/8”) with arms just over 33”, and finished with elite speed testing (his 4.28-second forty-yard dash is better than 99.6% of peers), an outstanding broad jump (101”, 96.2%), and a solid vertical (36.5”, 7.69), but weighs just 181 pounds, has tiny 8.25” hands, and did poorly in the three-cone (7.25, 23.5%) and shuttle (4.39, 29.0%), finishing with an overall Relative Athletic Score (RAS) of 8.56. While it’s unusual for New England to target prospects who perform poorly in the three-cone drill, the explosiveness he showed during pre-draft athletic testing likely played a significant role in the Patriots’ decision to bring him onto the roster, given new director of player personnel Matt Groh’s repeated emphasis on adding speed to the roster this offseason. So how do Thornton’s tools translate to his game on the field?

At his best, Thornton shows some nuance as a route-runner, despite coming from an offense that asked him to run a relatively simple tree consisting primarily of deeper go routes and posts with built-in choices, patterns that were intended to create opportunities for him to exploit defenses underneath, taking advantage of large cushions via in-breaking routes, slants, and crosses, and giving him the chance to produce on back-shoulder throws and other routes of that nature. He has a few different releases and shows the ability to attack a defender’s leverage and get even, getting on an opposing defender’s toes and leaning into opponents before breaking. His speed and explosiveness are apparent on tape when he’s able to effectively stack defenders on downfield attempts, and he can be competitive with his hands against press coverage. When targeted, he is able to track the ball effectively over his shoulder and adjust as needed, catching balls away from his frame and demonstrating the awareness to work near the sidelines. Despite his small hands, he appears to have good coordination and technique, dropping only three passes last year and coming down with several contested catches. Furthermore, unlike some of the other receivers in the class, his production was not manufactured on screens and easy throws underneath but often came at the intermediate-to-deep ranges of the field.

Despite those strengths, Thornton is not a finished product, and it’s likely he will spend the first year or two of his career in more of a reserve/situational role. It’s unclear whether he will be able to add significantly more weight to his wiry frame, but improving his overall strength, hand use, and footwork at the line will be critical to beating press coverage at the next level. He’ll have to further diversify his route tree, and do a better job of keeping defenders in his hip pocket through the route and shielding them from the ball when targeted. Despite his elite speed testing, he did not beat man coverage as consistently as anticipated, often producing more readily against zone. As a blocker, he sometimes engages with wide hands and ends up falling off of his man early. Furthermore, his lack of experience in the slot and lack of success as a return specialist (just seven kick return attempts at Baylor) may also inhibit the speed at which he’s able to work his way onto the field for meaningful snaps.

So how does his skillset fit into New England’s offense? While quarterback Mac Jones is sometimes considered a “game manager” with limited ability to throw the ball downfield, in 2020, he earned a grade of 98.3 on deep throws on Pro Football Focus, finishing first among college football quarterbacks that season in deep yards. Last season, the Patriots’ offense was primarily oriented around throws within twenty yards of the line of scrimmage, but Jones still finished with 52 deep attempts on the year, ranking eleventh among pro passers and finishing right between Josh Allen (51) and Justin Herbert (53), two quarterbacks who are often considered downfield throwers. In terms of intended air yards per attempt, Jones finished twelfth (8.0), tied with Kyler Murray and ahead of players like Herbert, Aaron Rodgers, and Pat Mahomes. Rather than relying on pure arm strength, Jones shows the ability to throw downfield with touch, timing, and anticipation, and it’s possible that, with additions like Thornton and DeVante Parker, he could make strides as a downfield passer, given that last season the team’s only deep threat was Nelson Agholor, and that Jones was playing behind an offensive line which was frequently being reshuffled, affecting the overall quality of protection for much of the season. As a rookie, Thornton isn’t likely to play a major role in the offense given the presence of veterans like Parker, Jakobi Meyers, and Kendrick Bourne, unless Parker continues to have trouble staying on the field (he appeared in just ten games last year); however, he could eventually end up as the team’s primary deep threat a year or two down the line. It remains to be seen, however, how significant an offensive role that is.