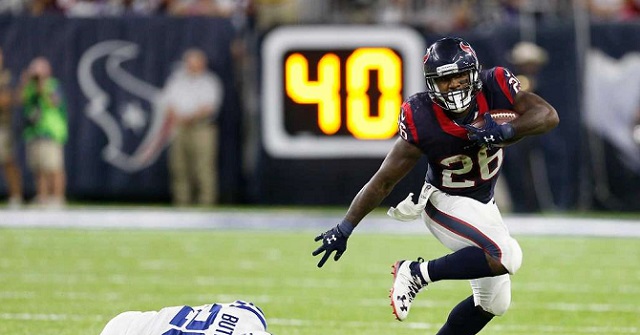 Football season has started the same way for the last two seasons for me.  I spend a weekend in July binge watching Last Chance U.  If you haven’t seen this masterpiece, it’s a Hard Knocks style show that follows a season of the best college football team that you’ve never heard of, East Mississippi Community College.  This football program, led by controversial head coach Buddy Stephens, snatches up a lot of the highly recruited SEC players who have been kicked off of their respective programs for failed drug tests, bad grades, and violent behavior.  Whether these guys deserve a second chance is up to the viewer to decide, but I dare you not to get sucked into this show about a team in Mississippi trying to win its fourth national title in six years…

With an aging and injury prone elite defense, Bill O’Brien, in his own right, is running out chances to win his first Super Bowl as a head coach.  A major piece of his offense, Lamar Miller, deserves another shot on your fantasy team. Miller is the 13th ranked running according to ESPN and I can make a case for him to be ranked ahead of a few guys who are being taken earlier.

The Houston Texans’ offense was a disaster last season with Brock Osweiler under center.  Houston was tied for 28th in the league averaging 17.4 points per game and finished 29th in the league in passing yards.  The Texans had no choice but to make headway in the ground game as they finished eighth in total rushing yards.  I can’t even begin to imagine how frustrating it was for Lamar Miller to only get 31 red zone rushes in 2016, finishing behind 19 other backs in that aspect. Matt Asiata received 36 carries inside the 20 to put that in perspective.

In my conversation with Matt Harmon of NFL.com (coming soon, if it’s not already released on our site), we both preached the importance of mixing in safe players with the high-risk guys that you draft for your fantasy teams.  In both seasons that Miller finished with at least 200 carries, he ran for at least 1,000 yards.  With an ADP of #26, I can’t think of a much safer choice for your RB1 or RB2 in the beginning or middle of the 3rd round if you find yourself in a good position to go WR-WR-RB, RB-WR-RB, whichever you prefer.

Whether Tom Savage or Deshaun Watson wins the starting job, we are looking at an improvement in the passing game compared to the disease-ridden Brock Osweiler empire of 2016.  Consequently, Miller saw a drop off in receptions and receiving yards after two seasons of at least 275 receiving yards, peaking in 2016, as he fell 3 yards short of 400 yards.  An improved passing game should open up things on the ground for Miller too, and we should see last season’s 4.0 yards per carry inch up more towards his career average of the 4.4-4.5 range.

Entering his age 26 season, Lamar is hitting his prime and he has only missed two games in his last four seasons as a pro.  Marshawn Lynch, who is ranked one spot ahead of Miller on ESPN, might be capped off at 200 touches this season while we know Miller will see 250+ if he plays at least 14 games.  Leonard Fournette, ranked two spots ahead, hasn’t played a down in the NFL and might run into the same problems that Miller had last season with Blake Bortles under center.  Todd Gurley comes in at #10 on ESPN and he averaged 3.2 yards per carry last season playing in a terrible offense.  Lamar Miller is getting another chance from me anywhere I can get him.