Where’s the Best Value for Picking the Upcoming NFL Division and Conference Champions?

Placing a wager on the team you think will win any particular division or conference in the NFL is a bet that keeps on giving. Most of the time, these outcomes don’t materialize until well into the year. Sometimes they come down to the final week of regular season games.

Picking the conference champion takes a sour turn if your team misses the playoffs, but when they do, it adds another level of excitement. It’s also nice to pair up a couple teams, or bet a block of your best hunches.

There are teams that are fashionable trends for various reasons. Some get sweet early odds because of new additions, or past performance. Certain teams are just flat out favorites nearly every season. Here’s what we think of the early futures odds and where you might find some value.

Early futures odds, still more than a month from the first day of rookie camp, are wide-open for debate.  So much is up for debate and analysis, but this what makes futures fun. It’s akin to a lottery ticket, but with much better odds.  Certain teams have automatically generated a lot of conversation prior to and during last month’s draft. Sure, early odds can be fashionable, but which teams really do warrant the trend?

Some teams became fashionable favorites almost as soon as the final Super Bowl horn sounded last February. Others after the final horn sounded in their final defeat. New Orleans navigated their way to the best record in football in 2018.

It earned them home field advantage in the NFC playoffs and a trendy pick for the Super Bowl. There were a bunch of futures bettors who had serious issues with one NFL referee. It took a 57-yard field goal in overtime, culminating after a blown call, to keep them out of the big game. The Saints lost very little in the off-season, but gained in two key areas.

They signed to big-body interior defensive lineman and massive tight end target for Drew Brees. The second best run defense in 2018 could be even better. During the draft, the Saints picked off a pair of safeties in the middle rounds to add depth to a suspect secondary.

But, you cannot discount Drew Brees controlling a Sean Payton, power offense, both playing in what looks like a very weak division. New Orleans may not have quite the sense of fashionable urgency as the NFC Conference champion, but a bet on them to win the NFC South is sound.

Without going into all the high-profile free agent acquisitions and other player moves, the Browns almost instantly catapulted themselves to the top of the AFC North division. Of all the teams in the AFC, only Kansas City and New England are viewed as favorites in their respective divisions. 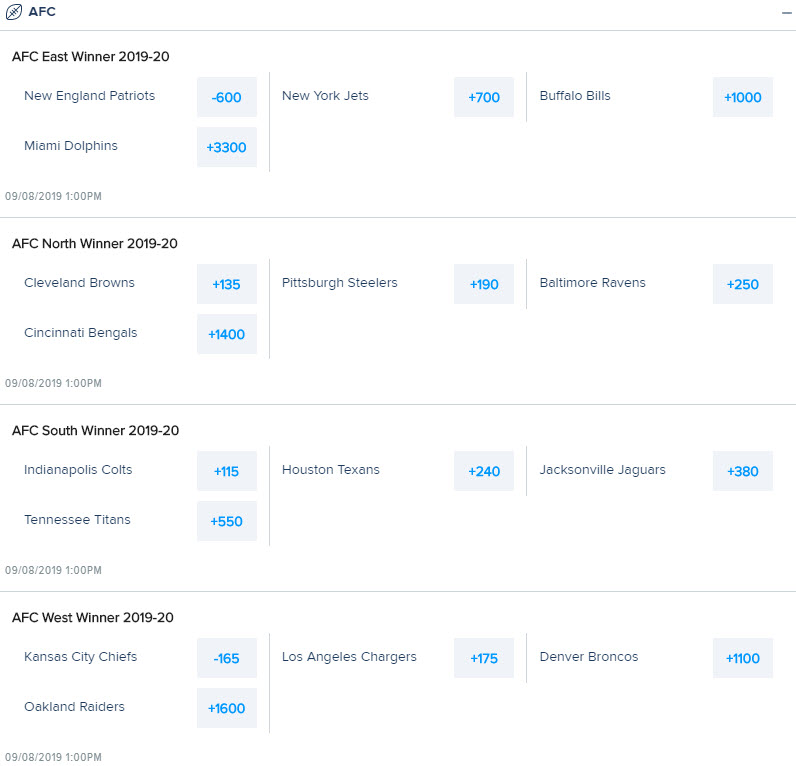 Sports Betting Update:  Online sports betting is legal and live in Pennsylvania and New Jersey. Odds on all Week 1 games are out. If you are in these states, you can bet legally on these NFL Futures on FanDuel Sportsbook.

The Browns and Indianapolis Colts have the most appealing odds in the North and South respectfully. However, neither have enough history to earn the oddsmakers nod as the lead dog in the pack. Cleveland became fashionable almost as soon as the ink dried on Odell Beckham Jr.’s contract.

Sure, the Colts have the strongest horse in the race for the AFC South, but speaking of dogs, the dog pound may be barking a lot in Cleveland. New Orleans has a pedigree of winning. While that gives them a better sense of security, some think the Browns’ time may have finally come.

What they have in common is the fact they are both the lead favorite to win their division. Sure, the Saints more so than Cleveland. However, taking the Browns and the Saints as divisional winners is not only a good way to cover up, but also it gives you a shot at a double winner. So, what about the best of the rest?

There are going to be other teams who are just plain fashionable favorites. They either always make the playoffs, or contend for their division each season. Here’s a look at the prospects of the best of those teams for winning their division and ultimately vying for the conference crown. 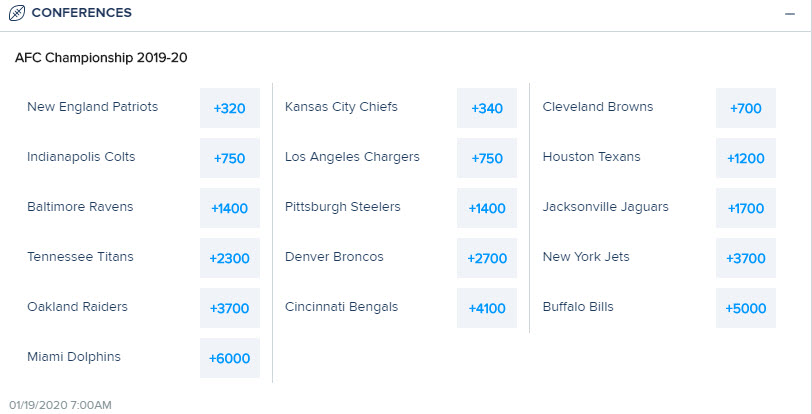 If you want to bet on whimsical conjecture, take anyone else in the AFC East. If you want to play the smart angle, take the Patriots in spite of the weak payout. New England is at -600, but when you’re building a futures’ strategy, winnings are winnings.

New England is an eye-popping -1,150 to make the AFC playoffs, over four times as likely as the second rated Chiefs. Only the Miami Dolphins at -1,450, to not make the playoffs, are deemed more of a sure thing.

Now, 10 straight AFC East titles, 16 out of the last 18, and nine Super Bowl appearances during that stretch make for very fashionable. Plus, there is still some cat called Brady operating a Bill Belichick coached football team. If you like fashionable, bet on the Patriots, again.

Sure, Kansas City is going to be fashionable based on last season’s performance. However, they may find the sledding tougher in the AFC West. Projected as the runner-up in the west, the Los Angeles Chargers could actually challenge the Chiefs for the West title.

Looking at the Chargers’ -198 playoff future, it’s pretty clear most oddsmakers think they’ll be good. Now, will they get enough breaks along the way to overcome KC and take the division? At a +175 to be the AFC West champion, it’s really not like you’re taking much of a long shot.

These two teams have excellent value as playoff contenders. Certainly betting against New England to win the east would be deemed, going-out-on-a-limb. The Patriots as the AFC Champion loses some of its luster since Kansas City, the Chargers, and even the Browns may present formidable obstacles.

Even the Chargers Super Bowl odds cut the rest of the AFC Conference in half, and are only topped by four other teams, including the Colts and Browns. While it might be a trendy flyer, LA has enough charge to win the AFC.

NFL Schedule is Out:  The full 2019 NFL Schedule is out and some books have odds for every game of the season. You can checkout the 2019 NFL Bye Weeks Schedule as you prepare for your fantasy football draft.

No One Making a Fashion Statement?

You may wonder why we drifted away from value picks in the NFC as soon as we mentioned the early favorite. That’s because the odds on the rest of the conference are somewhat of a jumbled mess. 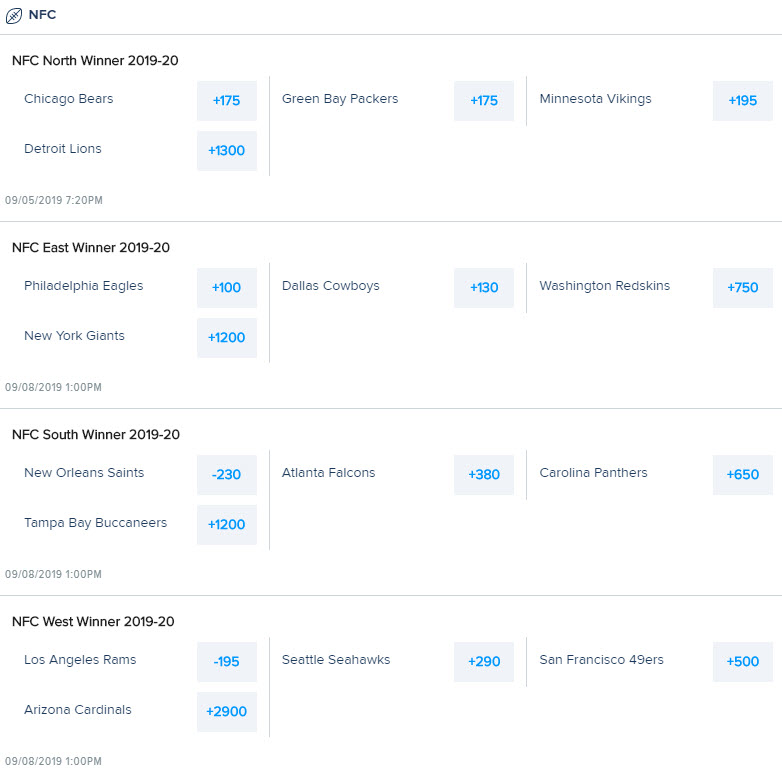 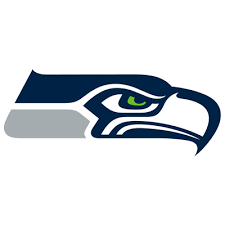 New Orleans is +400, only a slim 30-points better than the odds handed to the LA Rams. If you’ve been paying attention, an LA vs. LA Super Bowl might have a truly fashionable trend out in the City of Angels.

Seattle is the last of the top nine teams in the NFC at +1,400. Green Bay has a new coach, but albeit they still have their own version of a potential GOAT quarterback. The lead name in debate for the greatest of all time at quarterback is Tom Brady, but Aaron Rodgers is on almost everyone’s top five list.

Green Bay has a 100-point better number than Minnesota to win the NFC, but both sit behind the third-rated Chicago Bears. You have that correct; three of the top six contenders for the NFC crown are from the same division. Divisional odds for the Chicago, Green Bay and Minnesota are +175, +175 and +195.

Their early odds to win the NFC and represent in the Super Bowl are equally close. They fall fourth through sixth highest favorites, Minnesota the last team at +1,000. An interesting futures’ combo bet might be a block of these three against the middle.

Apparently, oddsmakers think whichever team takes the lead in the NFC North may have an improved shot at the whole conference. Another nice block of bets might be to cover your conference projections with the New Orleans Saints as the eventual Super Bowl representative.

If you’re looking for an interesting value out of the three North Division teams, the Vikings are an engaging thought. Like the Saints, Minnesota powered their way to a 13-win season just two years ago.

And, like New Orleans they missed out by one game on a trip to the Super Bowl. The Vikings have addressed some important weaknesses, and a Mike Zimmer team with a strong offense could present a bunch of problems for opponents.

Summing it All Up 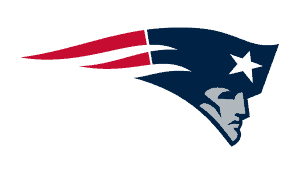 New England as the AFC East champion is a nice block to begin building a futures strategy. Kansas City is worthy of consideration for the conference and the division, but watch out for a surprise by the Chargers.

Putting the Browns on a short block of futures to win their division may give you a little cushion. Across the way in the NFC Conference, New Orleans isn’t necessarily head-and-shoulders above everyone else, but they have a chip on one of those shoulders.

If you have a clear hunch on who will win the North Division, any of the top three could be another excellent horse to have in the race. A six or eight team block that works out, could have you sitting in the catbird seat heading into Conference Championship Sunday.