Last week was a mixed bag of waiver recommendations.

I made some great waiver suggestions: Ryan Fitzpatrick, Phillip Lindsay, Geronimo Allison, Brandon McManus. But also some that left both of us scratching our heads: Tyrod Taylor, Jonnu Smith, Washington Redskins and Ryan Grant. I’m pretty confident in my picks for this upcoming week — even the Blake Bortles one! (Oh God, what have I done…)

Ryan Fitzpatrick, TB: The consensus pre-season favorite for MVP is living up to those expectations so far in 2018. Jameis Who-ston?! In 2017, Fitzpatrick’s two opponents were ranked 15th best in fantasy points allowed to opposing QBs (Saints) and 10th best against opposing QBs (Eagles) and he dropped 400 passing yards and 4 TDs on both of ’em. In week three Fitzmagic (sorry, it’s an overused lame nickname, but he’s earned every bit of it so far in 2018) will face the Steelers who were 8th best in fantasy points allowed to opposing QBs. In week 2, however, Patrick Mahomes lit the Steelers up like the 4th of July for 300+ passing yards and 6 passing TDs. Fitzpatrick has similar weapons to pass to as Mahomes — I’m smelling another 25+ fantasy point game.

Blake Bortles, JAX: I was at Blake Bortles’s rainy opening week 1 game against the Giants in New Jersey. Later that day I tweeted this: 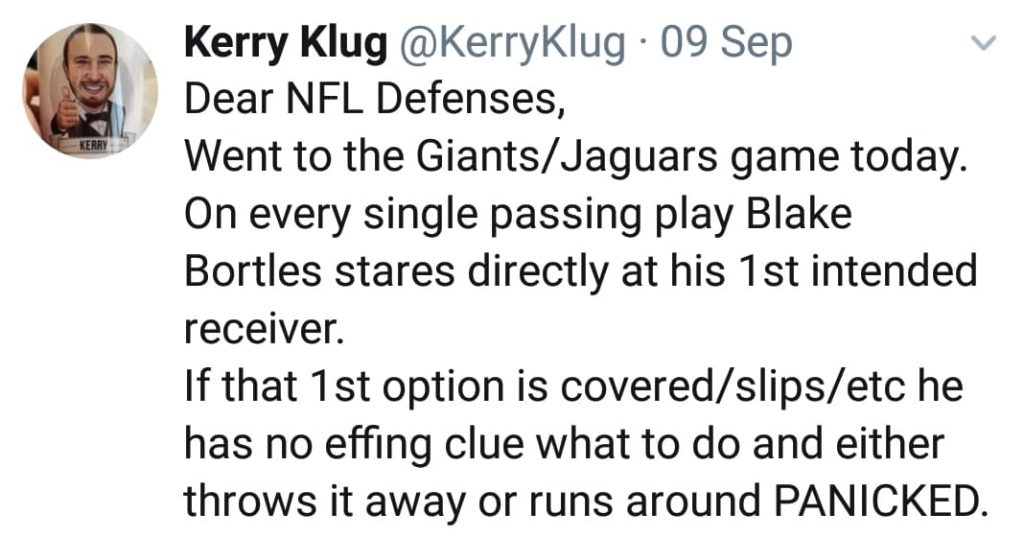 Well, Bortles is an avid follower of my Twitter and responded with a huge week in game 2 against the Patriots dropping 377 passing yards and 4 TDs for the 4th highest QB score. Week 3 sees the Jaguars welcoming the Titans to town. The Titans allowed the 7th most passing yards in 2017. So far the Titans have faced Ryan Tannehill (13 fantasy points) and then just let Deshaun Watson throw for 310 yards with 2 TDs this weekend. I think I’m the only one on the Blake Bortles Bandwagon, but I don’t mind — I think he’s better than we (and even I) give him credit for.

Aaron Jones, GB: Shhhh — don’t let your league mates see this one! Jones has been reinstated by the NFL prior to the Packers week 3 game in our nation’s capital and maybe they’ve forgotten that he’s coming back. Hopefully this time he can stay off the weeeeeeeeeed! Jamaal Williams has been the RB1 for the Packers so far and really not done anything with that title. 31 attempts, 106 yards, 0 TDs, 100% of the 84% that own him saying “meh.” Aaron Rodgers deserves better — and maybe Jones is that better.

Austin Ekeler, LAC: Another scorching dumb take by me: 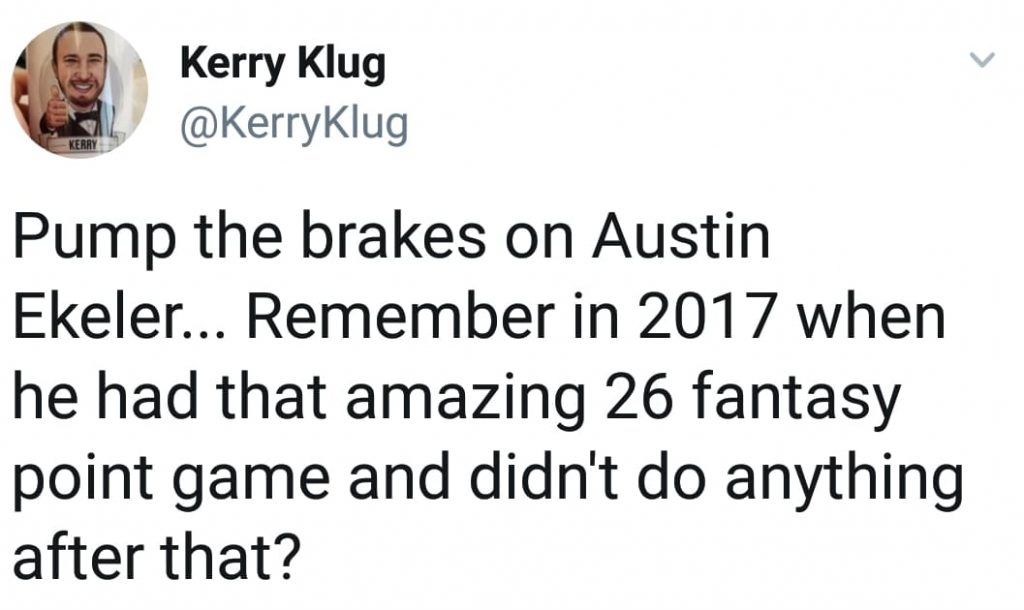 Well, if it wasn’t for a Melvin Gordon injury scare I still wouldn’t really be recommending Ekeler, but here we are. Gordon’s injury is being called an “upper body injury” which man, that must’ve been one helluva hit to hurt his entire upper body! I don’t really thing Gordon will miss any time, but Ekeler might be utilized a bit more to save Gordon for future games. It’s the battle for LA in week 3 with the Rams facing the Chargers. Last season, the Rams allowed the second most fantasy points to opposing running backs. This year, they’ve done better, but they’ve only faced a shell-of-himself Marshawn Lynch and a completely underutilized David Johnson. I’m liking Ekeler in week 3 with or without Gordon.

Giovani Bernard, CIN: Joe Mixon owners should put their claims in early for Bernard who is clearly the next guy up after Mixon had surgery on his knee and should miss the next 2-3 weeks. However, I wouldn’t call Bernard a surefire start in week 3. There’s a reason he is the back-up and the Panthers were the 3rd best team against the run in 2017.

Ronald Jones, TB: No, Jones has not taken an NFL regular season snap in 2018 yet, but you know who has? Peyton Barber. And he has 9 fantasy points on the year. He has 35 attempts on the year for 91 total rushing yards. Jones was the Bucs 2nd round pick and if the Bucs rushing game keeps coming up short, it could be Jonestown before you know it!

Marcus Murphy, BUF: Last week I had Murphy on here and y’all were straight scoffing at me. Honestly, I didn’t have him on here because I think he’s going to be good right now — but I think he’s going to be encroaching on snaps by LeSean McCoy (who I have as one of my biggest disappointments for 2018) and Chris Ivory. Granted, in week 2 it was Ivory who got the vulture rushing TD, but none of the BIlls running backs made anything happen on the ground. Well now in week 3 McCoy is said to have cracked some rib cartilage and excuse me for a minute while I go vom in the bathroom. That sounds awful and painful, but McCoy is still somehow expected to play through it (we’ll see.) In week 3 the Bills head to Minnesota to face the Vikings who allowed the fewest fantasy points to running backs in 2017 and have so far allowed the 6th fewest in 2018. I think in a few weeks Murphy could step up to take more snaps.

John Brown & Willie Snead IV, BAL: Joe Flacco is flinging the ball to all three of his primary receivers in Snead, Brown and Michael Crabtree. Week 1: Snead had 6 targets, Crabtree: 6, Brown: 4 — each with a TD reception. Week 2: 10 targets for Crabtree, 10 for Brown and 8 for Snead. I’d grab Brown before Snead — but put a claim in for both just in case.

Phillip Dorsett, NE: Another guy who was in this column last week — Dorsett didn’t have as exciting of a week 2 as he did in week 1, but still lead the team with 5 catches in 7 targets for 44 yards. Yes, it’s looking like the Patriots are getting Josh Gordon — but I’m not sure he will have a huge role in his first week with his new team meaning Dorsett could still be getting some balls thrown his way in week 3. In week 3 the Patriots will get the Detroit Lions who made the 49ers look basic in week 2, but allowed everyone to get way too excited about Sam Darnold throwing 2 TD passes to his wide receivers in week 1.

Terrelle Pryor, NYJ: Let’s all not forget how Terrelle Pryor was the mayor of Hype City last year. Well maybe all he needed was Sam Darnold throwing him the ball. With the Jets rushing attack only mustering 41 yards and playing from behind for most of the game, Darnold threw the ball 41 times — 8 of which found their way toward Pryor. He hauled 4 of those targets in for 84 yards. Sure, Pryor was only on the field for 23% of the Jets snaps, but he made the most of his opportunity. He was second only to Quincy Enunwa in targets for Gang Green. Check out the rest of the Jets depth chart for more usage stats: NY Jets Depth Chart.

Torrey Smith & Jarius Wright, CAR: This is one to closely monitor. Both guys are owned in less than 1% of leagues, both guys appeared in 70% of Carolina’s snaps in week 2, both guys saw 7 targets in week 2, both guys caught a TD pass in week 2. So who would I trust more? Well Torrey Smith has a better history of being a productive wide receiver from his Raven playing days so I’d lean towards him. Someone has to be playing opposite Devin Funchess and DJ Moore is actually not that guy just yet, but is another one to keep on your watch list.

Jesse James, PIT: James is in a bit of a timeshare with Vance McDonald (60% of snaps to McDonald’s 50% in week 2,) but James has definitely done more to earn more of a stake in that timeshare heading into week 3. Especially after a huge 5 reception, 138 yard plus a TD game against the Chiefs. James can be hot or cold dating back as recently as last year when he had 97 receiving yards in week 13 — only to have 16 receiving yards over his next 3 games. But this is 2018 baby! And next week they’re heading down to Tampa Bay who have allowed the second most receiving yards to to tight ends so far this season! Gimme all the James shares!

Jake Butt, DEN: Grab him for the team name potential, start him for the healthy dose of targets he’s receiving. Despite splitting time with Jeff Heuerman (60% to 52% in favor of Heuerman) Butt is doing more receiving more targets in both week 1 and 2. Butt unfortunately missed all of 2017 with a torn ACL so it’s nice to see him gaining targets, catches and yards from week 1 to week 2. Week 3 he’ll head to Baltimore to face a Ravens team that allowed the 8th most fantasy points to tight ends in 2017. I deserve praise for my maturity in this paragraph.

Miami Dolphins, vs OAK: The Dolphins have 5 interceptions already this season thanks to games against Marcus Mariota/Blaine Gabbert and Sam Darnold. Week 3 sees them face Raiders QB Derek Carr who threw 3 INTs in his first game and clearly is more like his brother than any of us wanted him to be.

Randy Bullock, CIN: Bullock had identical games in week 1 and 2: 1 FG made from within 39 yards, 1 field goal made from between 40-49 yards and 4 extra points in each game for 11 fantasy points. Week 3 the Bengals should have a tougher matchup against the Panthers which could lead to a few more stalled red zone drives which opens Bullock up to more FG attempts.