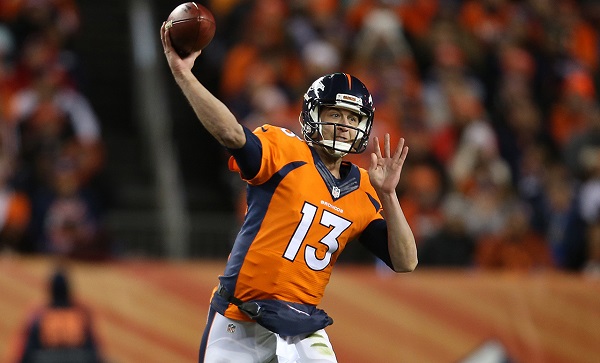 Hopefully you took my advice from last week’s post and grabbed Chris Thompson. He was the fifth highest scoring running back with 25.9 points in PPR leagues. Tarik Cohen also had himself a day against the Bucs. The loss of WR Kevin White lead to Cohen getting 8 receptions again. Mohamed Sanu again had a pretty nice game with 13.5 points against Green Bay. And even old dog Philip Rivers had another 17+ point day for the Chargers.

Below you’ll find your under-owned players who you should either grab for this week — or for the long term. If you’ve got any league-specific questions, hit me up in the comments section!

Carson Wentz, PHI, 45.8% owned: Wentz burning the Redskins for 307 yards and 2 TD’s in his week 1 match-up lead me to recommend another 2nd year QB in Jared Goff against the Redskins in Week 2. Unfortunately I should’ve just recommended Wentz himself! Wentz was the second highest scoring QB of week 2 with 24.8 points on 333 yards and another pair of TDs against the Chiefs. Wentz will get a tougher opponent in week 3 facing the Giants, but you can still expect Wentz to be one of the most added backup QBs going forward as we enter the bye weeks. I don’t think we’ll see 55 yards rushing from Wentz again, but it is an added bonus to know he has a little Vick in him.

Trevor Siemian, DEN, 10.4% owned: Window might be closing HARD on Siemian after his first two weeks. He has back to back 22 point performances. Broncos new offensive coordinator Mike McCoy has really figured something out with Siemian. Against Dallas, Siemian might not have had a lot of passing yards (231) but he made the completions when they counted with 4 passing TDs. With CJ Anderson rushing for 199 yards already and two stud WRs in Demaryius Thomas and Emmanuel Sanders on either side of him Siemian (and McCoy’s) job should be very easy.

Derrick Henry, TEN, 66.9%: DeMarco Murray suffered a hamstring injury in the Titans week 2 victory over the Jags, but he wasn’t exactly setting the world on fire before then anyway. Enter Derrick Henry who then rushed for 92 yards and a TD in his place. Titans head coach Mike Mularkey is coming out and being politically correct by saying that Murray is still his starter, but if Henry performs well again with Murray possibly missing time — he might have to change his tune. Be warned, however, that the Titans face off against the Seahawks defense next week. But don’t be too warned — Carlos Hyde was week 2’s leading rusher with 124 yards against them.

Chris Carson, SEA, 7.9%: Eddie Lacy will find himself on the CFL’s Hamilton Tiger-Cats in about a week or so leaving Carson as the lead back in Seattle. Carson’s main competition, Thomas Rawls had only 5 rushes to Carson’s 20 in week 2. I know CJ Prosise is still there as a pass catching option for Russell Wilson, but he had 0 rushing attempts and only hauled in 3 passes for 22 yards against the 49ers. Seattle’s offensive line is still one of the worst in the league which limits any Seattle running back to a flex status, but grab the hot hand and hope he runs with it.

Javorius Allen, BAL, 7.8%: Well this is awkward. I was recommending Terrance West everywhere last week: in my waiver article, in my start/sit article, on Twitter, on the Fantasy Life app, MySpace, Snapchat — literally anywhere people would listen. West performed pretty well with 12.5 points, but Buck Allen was the RB to own for the Ravens in week 2 with 21.1 points. He led the Raven’s RBs in rushing attempts and targets from Joe Flacco. Next week he’ll face off against the Jacksonville Jaguars who have allowed the 4th most rushing yards so far this season.

Allen Hurns/Marqise Lee JAX, 7.6%/30.2%: Hurns was a surprise top 10 scoring WR in week 2. He scored 20.2 fantasy points on 6 catches for 82 yards and a TD. Lee was no slouch himself with 14.6 fantasy points from 7 catches for 76 yards. Bortles and his receivers are going to have a tougher challenge in week 3 against Eric Weddle, Tony Jefferson and the impressive Ravens secondary, but with Allen Robinson out here are your top 2 receivers in Jacksonville.

Jermaine Kearse, NYJ, 5.5%: I recommended Kearse to you in week 1 and took a little heat for it in the comments, but here we are 2 weeks in and Kearse is one of the highest scoring wide receivers in our fantasy game. Kearse is going to get a lot of targets as the Jets trail in the second half which should lead to him getting you a bunch of points in your FLEX spot. The Jets head into a week 3 matchup at home against the Dolphins who allowed 331 yards to Philip Rivers and the Chargers in week 2. Don’t get me wrong, if he were on the Chargers, Josh McCown would only be the backup’s backup, but the potential is there. The Dolphins defensive front is formidable, but their secondary is the weakness on defense.

Benjamin Watson, BAL, 0.5%: Technically in last week’s Waiver Wired article I recommended you add the Baltimore Ravens Tight Ends. I didn’t mention Watson’s name, but you knew what I was getting at, right? Watson blew up for 91 yards on 8 receptions scoring the 6th highest fantasy points among tight ends. This week Watson will get the Jaguars who have allowed 18.2 fantasy points to tight ends in 2017.

Ed Dickson, CAR, 0.1%: Noooo Greg Olsen! Olsen broke his foot and is expected to miss 6 to 8 weeks. I have to be careful how I word this next sentence: this is where Dickson comes in. Damn. I blew it. AH! AGAIN! Dickson hasn’t been fantasy relevant since 2011…kinda. Now, he’ll find himself in a starting role and a great matchup against the Saints defense. The Saints defense has allowed the second-most points to tight ends so far in 2017. If you need a one week fill in wrap your hands around Dickson…damn it.

Green Bay Packers, 9.4%: In week 1 against a weak offensive line, the Packers only allowed 9 points to the Seahawks. Week 2…the Falcons happened. In week 3 the Packers will face an equally crappy Bengals offensive line who should have a new coach after the game. The Bengals have only scored 9 points so far and are currently 24th in total yards of offense.

Ryan Succop, TEN, 2.4%: Succop has been in the top-10 in fantasy points amongst kickers in both weeks now. He went 3/4 in FGs week 1 with a 50+ FG and 1/1 in PATs and in week 2 he went 3/3 in FGs and 4/4 in PATs. He’s currently in the top-5 in kicker scoring despite being owned in less than 5% leagues. I think the Titans defense will be stalled by the Seahawks defense in the red zone which could lead to another 10+ point performance from Succop. Sick of your kicker? Of course you are, grab Succop.