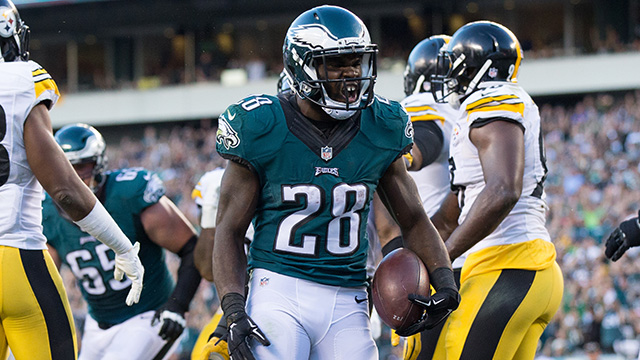 Last week was a rough one for me. Last time I ask Zandar for fantasy football advice! I got some feedback in the comments last week that I need to add some deeper league players so I tried to sprinkle some really low ownership guys in this week’s article…

Alex Smith, KC, 43.5% owned: The emergence of Kareem Hunt is doing wonders Smith’s numbers this year. With defenses needing to try (and fail) to contain the highest scoring fantasy player by 23.2 points, Smith is open to dink and dunk to Travis Kelce and Tyreek Hill. In Week 4 the Chiefs are at home for a Monday night showdown against the Redskins. The Skins have allowed the 5th fewest yards to RBs this season meaning they might try to lock Hunt down a little bit which could lead to more passing opportunities for the highest scoring fantasy QB: Alex Smith!

Chris Carson, SEA, 42.7%: Tell me why Eddie Lacy (92%) is more owned than Chris Carson at this point? For the third week in a row, Carson has led the Seahawks in rushing attempts every week and is still the 4th most owned Seattle running back. If your leaguemates have been sleeping on Carson so far, drop Lacy and grab Carson. He’ll get a surprisingly stingy-against-the-run Colts in week 4, but long term he’s the RB to own in Seattle.

Jamaal Charles/Devontae Booker, DEN: It’s too early to Mile High panic, but Charles did end up with more rushing attempts than CJ Anderson in week 3. Keep in perspective that despite his 30.4 point out break in week 2, Anderson has only averaged a little over 8 fantasy points in his other 2 matchups. Like I said, don’t panic yet, but Booker is coming back from injury and Charles did end up scoring a TD in week 3. The Raiders haven’t allowed a rushing TD yet this season, but did give up 150 receiving yards and a receiving TD to Chris Thompson last week.

Alvin Kamara, NO, 11.3%: I told you to sit Saints RBs in week 3 and here’s the proof: Kamara was their leading fantasy scorer with 13.2 points. He also has the most targets from Drew Brees with 13.  Mark Ingram is still the #1 back to own in N’Awlins, but Kamara is someone to watch for production down the line in case of an injury to Ingram or Peterson getting traded.

Wendell Smallwood, PHI, 2.4%: Smallwood was my fantasy sleeper of the year pick because I think he’s talented and was stuck behind two running backs he has more potential than. After Darren Sproles went down, Smallwood seemed to take over with 12 rushes for 71 yards. Corey Clement and LaGarrette Blount were also there to take some touches away — but expect that to change in week 4 against the Chargers. Good news for Smallwood: The Chargers have allowed the most rushing yards in the NFL so far.

Branden Oliver, LAC, 0.3%: Consider this a deep speculative grab due to Melvin Gordon’s bone bruise in his knee. It doesn’t look like Gordon is going to miss any time yet, but Oliver is the only other Charger RB with positive yardage rushing attempts. Oliver only rushed for 16 yards in 8 attempts (yikes) and caught 4 passes for 18 yards (double yikes.) But if he’s going to be the next man up, he could get some positive yards in good matchups.

Devin Funchess, CAR, 11.2%: With Kelvin Benjamin nursing a knee injury, Devin Funchess stepped in and grabbed 4 out of his 10 targets for 58 yards. All reports out of Carolina are that Benjamin didn’t suffer any structural damage and it is all just imaginary, phantom growing pains in his brain. Funchess is obviously going to be the guy you want in Carolina with Greg Olsen out and now Benjamin probably going to miss week 4. Best news about Funchess? New England Patriots in week 4 babyyyyy! Patriots have allowed 572 yards and 3 TDs to opposing WRs so far.

Robert Woods, LAR, 4.8%: The Rams are desperate to find a second wide receiver for Jared Goff to compliment Sammy Watkins. After a 76 yard, 1 TD game in week 1, it looked like Cooper Kupp might fit the bill, but he’s only hauled in 5 passes for 50 yards total since. Week 3 saw Robert Woods going catch for catch with Watkins grabbing 6 Goff balls himself for 108 yards. Honestly, it could be back and forth between Woods and Kupp all year, but for now I’d speculate on Woods. Do not expect great things in their week 4 showdown with the Cowboys though — they’ve allowed the 4th fewest receiving yards to wide receivers.

Paul Richardson, SEA, 2.9%: Another team looking for a solid WR2 is the Seattle Seahawks. I thought they might’ve found it in Tyler Lockett after a 6 catch, 64 yard, 12.4 fantasy point game in week 2, but he only saw 2 passes in week for 30 yards. This made me take a longer look at who else is catching balls in Seattle. Richardson is second to Doug Baldwin with 12 targets from Russell Wilson and is their only WR to catch a TD. Richardson also had 9.9 fantasy points in week 1 and 2 and 11 in week 3. If you’re speculating for sleeper WR who are available — grab Richardson.

Charles Clay, BUF, 8.2%: Alright, I see you Charles Clay! Clay caught a TD pass in week 1 and week 3 who hasn’t amassed many yards so far this season, but you know he’s one of Tyrod Taylor’s favorite targets. And with a lack of reliable WR options in Buffalo that means a lot more of “Taylor to Clay” calls. His week 4 opponent, the Falcons, did allow the 9th most receiving yards to TEs in 2016.

Seth DeValve, CLE, 0.4%: Kenny Britt finally caught more than one pass in a game this year, but the Browns other wide receiver, Rashard Higgins only grabbed 2 catches for 10 yards. Due to this inconsistency, DeValve is actually 3rd among Browns receivers with 9 targets, but first with 103 receiving yards. Bengals allowed the 4th most receiving yards to TEs in 2016, but have only allowed 7 total receptions to TEs in 2017. This might have more to say about the tight ends the Bengals have faced so far though: 1 reception by Nick Boyle of Baltimore in week 1, 0 receptions by Texans TEs in week 2 and only 5 TE receptions between Martellus Bennett and Lance Kendricks in Green Bay in week 3. Someone has to gain some consistency in this Browns passing games and it could be DeValve if you’re lucky.

Steelers vs. Baltimore Ravens, 58.4%: The Steelers pass rush has been very impressive so far. They have allowed the second fewest passing yards in 2017. And if you saw what happened to Joe Flacco in wee Britain last week, you know the Ravens could be in trouble. Unfortunately for Flacco that performance wasn’t for British eyes only — everyone stateside saw him wilt in the fog as well. The Steelers aren’t as good against the run, but if they can limit Flacco just like the Jags did–the Steelers could get you some fantasy points.

Lions vs. Minnesota Vikings, 16.5%: Despite allowing 30 points to the Falcons last week, the Lions added to their first place fantasy point total due to another 3 interception game and their third straight game with a defensive TD. They’ll be facing off against the Minnesota Vikings who have logged the second highest yards per game, but the Lions still scored 10 fantasy points against an equally strong offense in the Falcons. As long as ball-hawks Glover Quin and Darius Slay are prowling in the secondary, the Lions can score some fantasy points.

Ryan Succop, TEN, 9.3%: LAST CALL! Last time Succop will be in this article. He’s your highest fantasy scoring kicker after finishing 3rd in scoring each week. He’s been consistent and fairly accurate and as long as the Titans defense is clicking enough to give him solid field goal position and extra points — he should easily net you 10+ fantasy points.

Jason Myers, JAX, 1.2%: Jacksonville’s 44 point explosion in week 3 led to a 15 fantasy point game from Myers. Weird stat of the day: the Jets have only allowed 1 FG all season, but due to their sub-par defense they’ve allowed 9 extra points. If Bortles and the Jags hot performance follows them back from across the pond against the Jets it could lead to another high-scoring game from Myers.