In an attempt to help determine which quarterback, wide receiver, and/or tight end to start in week one we have sliced and diced some statistics.  The stats we are using are the last six games of last season.  With numerous off season moves there are some inaccuracies with using the data to predict 2011 outcomes.  As the season moves forward, we will use this season’s stats and increase the accuracy of this column.

Before clicking on this column you already knew Pittsburgh, the New York Jets, and the Packers were good against the pass.  You also already knew that your studs like Aaron Rodgers, Andre Johnson, and Antonio Gates were going to be in your starting lineup regardless of their opponent.

The goal here is to help layout why Jimmy Graham might be a better start than Dallas Clark or to give you that confidence to play Matt Ryan instead of Joe Flacco.

We would love to hear your comments, questions, and concerns about this information.  We believe these stats can be beneficial when setting your lineup and we want to make sure it is as user-friendly as possible. 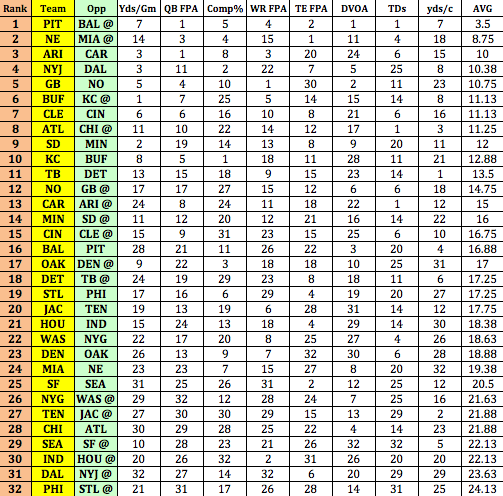 Rank: Overall ranking of each team.

Team: The team that is being evaluated for their defensive strength

Yds/Gm: Total passing yards given up per game

Average: The average of each each individual ranking (this makes up the overall ranking)