I’d like to welcome back my old friend Statistical Strategery. This is where I throw some numbers together and see if we can gauge which team defenses are the easiest and hardest to run, pass or kick against, well, not the kick part. This is week 1 and there have been major coaching and personnel changes in the NFL so these numbers won’t be quite as helpful as they will be in say week 8, but they are what we have to work with.

The one thing that is obvious for week one is that the Steelers and Ravens are going to be tough to run on, but you also can’t not start Ray Rice and Rashard Mendenhall (them’s the breaks). Thankfully there are some fantasy RBs who do have nice matchups, like Deangelo Williams, Jamaal Charles, Darren McFadden, Beanie Wells and the Giant backs.

The idea to start your studs no matter the matchups is even more true early in the season when we haven’t seen defenses at full strength and in new schemes, etc..

I do these charts for passing defenses as well and am always looking for new stats and ways to tweak them so comments are always welcome. The Key is at the bottom if you have any questions about the numbers. Good luck! 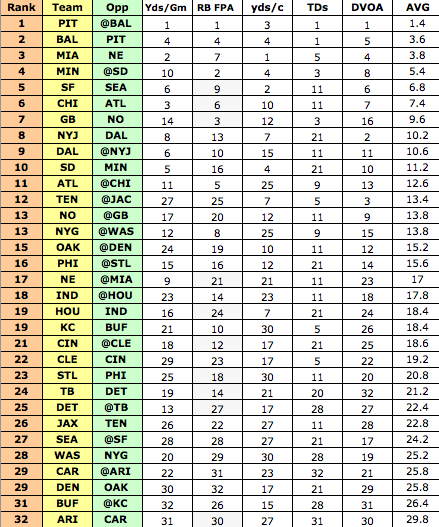 Each number is the ranking that the teams have in that particular statistic over the last 7 weeks.  For example, Pittsburgh has given up the least amount of rushing yards per game so they have a “1″ under the “Yds/Gm” column.  The ranking on the left coincides with the average on the right.  The higher the number the worse their rush defense stats are.

Rank: Overall ranking of each team.

Team: The team that is being evaluated for their defensive strength.

Yds/Gm: Total rushing yards given up per game

Average: The average of each each individual ranking. (this corresponds to the overall ranking)

Ah, actual strategy! I love it. I’ve read this and come to my own conclusions but I’d love to know what you think of the following:

I went a bit wild drafting RBs in a league with a long bench. I need to drop one to pick up a K (stupid Kickers). So thoughts on who I start and who I drop?:

Trade offer, I give javhid best and steve johnson, I get greg jennings.and plaxico, thoughts?

Are you going to put out your weekly position rankings this year? I need a D for Week 1 and my weird ass league snapped up the top Ds in the draft. Obviously I’m playing matchups and am looking at KC (vs. Buff), SD (vs. Minn) and Tenn (Vs. Jacksonville). Any other horrible offenses that you think will make the opposing D look good?

I left the draft with Celek as my TE which I’d like to upgrade. The owner of Owen Daniels has Cassel and Peyton as her QBs so she might be motivated to trade Daniels. I’d have to give her my backup QB Stafford to do it (Romo is my starter). I’m pretty high on Stafford to have a huge year so if I’m right, I could get a lot more for him later but is the chance to upgrade to Daniels right now worth trading him?

@douglas: I’d probably drop Washington because he’ll be safe on the wire for now.

@herschel: Does clearing your cache help?

Ben Tate or James Starks on my bench? Non PPR. Currently have Starks.

@Andrew: Not good for you

@hideousmutants: That is tough. I think I’d wait.

@MJD Took A Knee: YEah, the switch to the new server is effing us up right now.

Doc, I wrote this on the forums, but Im not sure you check them – Im pasting my question here. Please, dont be annoyed!

Ive read your site for almost 3 years, and I must have you assess my team, if you could. Please, do not be gentle – even if it hurts. I’m thoroughly displeased with this team, but hearing it from you would help me.

This is my team, with round chosen:

Notes:
1) regret taking blount over best; thought best would fall back to me in early 4th.
2) regret taking bess over jacoby ford… or should I?
3) finley in 4th seems too early for a TE, but it was between him, welker, and brandon marshell, and I thought I could wait on WRs since I had AJ.
4) glad i locked up indy and green bay’s running games! i need a lottery ticket rb, bad.

PS – Youre even a great fantasy baseball writer (I read your baseball fillins). Keep it up my friend.”

@charlie batch: There are question marks to be sure, but you were smart about everything. Bess in PPR should still probably out produce Ford who will be sporadic. I probably would have went with the wide receiver over Finley, but I love Finley so it’s hard to be too hard on that pick. I do think you’ll get some good production out of the Indy and GB backfield eventually. Overall you’ll need some breaks, but in a 14 teamer the in season moves are really important.

hey doc – thx for all the great work. looking to pickup a TE in my points league (PPR)… moves are limited so trying to hold onto the TE i pickup.

who you like best from gronkowski, jared cook or lance kendricks? theres good stuff about each but curious to see ur thoughts…

Need some help, was waiting to take a QB and got bumrushed in my long wait between picks, literally someone made a joke and 12 or 13 QBs came off the board…So I ended up with this, what do you think about week 1?

Long time reader, only chimed in a few times but really was hoping for your input on this one…thank you for all the input and everything you do, keep uo the great work !!!

How good is Denver’s defense with Miller added.

LeRoy I like Bradford passing to Kendricks. Should be special.

Got one for you: Hightower @ NYG or Sproles @ GB in a return yardage league?

Leaning Hightower although Crosby has a terrible touchback %.

12 team standard who had more upside? D.Carter for Indy or g.little for cle. And are.they worth dropping Ricky Williams?

@Leroy: I like all of them, but I’m leaning Cook. I love Kendricks’ upside for a riskier pick.

@SwnDvr: Yeah, that’s a sad state there at QB. I think I’d at least look to upgrade a little with a trade if you can. I’d probably switch from Manningham/Moreno at flex and put Wells and Williams as the starters. I like Starks to step up at some point so that’s good. I would probably drop Torain for an upside backup RB or QB like Cam.

@Mike Scobey: They are much improved.

Love your analysis above. I currently have ARI as a week 1 pickup but the run ranking against Williams and Newton give me pause. Might I be better off with NYG, SF or KC? If so, which would you recommend? Thanks.

So help me out pick 2: medenhall, blount, or beanie wells