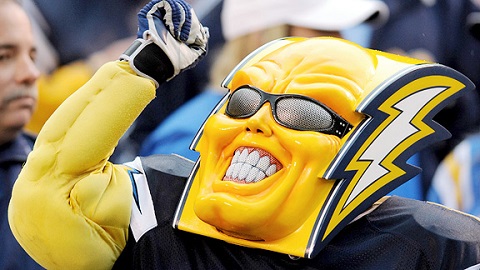 Who are these “Chargers” you speak of? Are we talking about my phone charger? Yeah, you’re right, such faux bewilderment by me is totally unbecoming of a true Charges fan. All 12 of us. But here we are, probably the biggest test of the young season, and… brah, check out those waves. Laters. Meanwhile, Pete Carroll is too busy helming the Northwest Death Star and poisoning San Francisco’s water supply to know what a Charger is or what it does. In fact, there are going to be more Chargers fans in Portland this Sunday than San Diego. And while you could accuse me of being a bit bias with the lede, I simply refuse to talk about a Houston-Oakland match-up. And no, the Rams and Cardinals seems equally as boring. And while I would have liked to have highlighted the Jets-Packers game, I’m pretty sure I would be forced to pay royalties to State Farm for doing so. Unabashed Chargers homerism it is!

Seahawks vs. Chargers – Chargers have a way of stepping up against tough opponents and playing over their heads. They also have a way of sh*tting the bed in these situations as well. So the Chargers are essentially like 80% of all NFL teams.

Rams vs. Buccaneers – I think, for one game, the teams should play on that pirate ship.

Chiefs vs. Broncos – Let’s see what happens when Peyton Manning gets to throw against a defense that is actually a step down from the Cowboys defense, something not thought possible by scientists.

Texans vs. Raiders – I honestly would not be surprised if this game ended in a scoreless tie.