Continuing where we left off with the Week 1 Rush Defense Strategy guide, I would like to note that these numbers are merely a statistical representation of defenses against the run and cannot predict anomalies such as Mendenhall’s all but absent performance in Week 1. Yes Baltimore is a great defense against the run and yes Mendenhall was probably your first round pick, but sometimes real life just doesn’t always coincide with the wants and needs of the Fantasy Football world.

Now- with that being said, I want to look over some of these numbers and matchups for Week 2 and take some stabs at some likely and also unlikely candidates who could be in for some colossal numbers this week. If you look at the chart, you’ll see that we have averaged the last 7 games of the 2010 season with the results from the first week of play. This gives us a more accurate depiction of a defenses ability to stop the run rather than just basing our opinions on one week in the season.

It’s easy to say that your studs are going to have a good game against the lower ranked teams on this board i.e. Bradshaw, Peterson, Turner, etc. But here are some other guys that face some run-friendly defenses that should pave your way to pay-dirt. 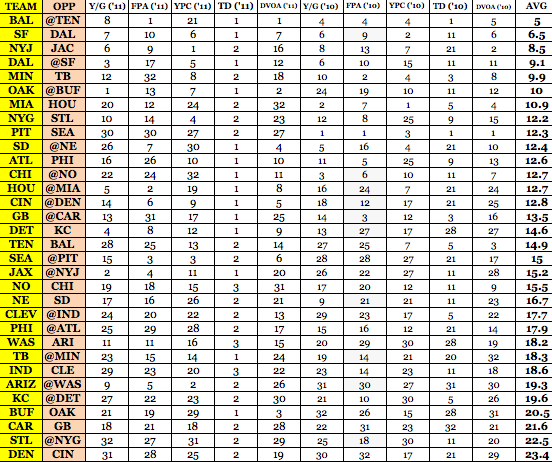 After letting Run DMC of Oakland have his way with their run D, Denver is still at the bottom of our Run Defense chart and should be just as friendly to Benson this week.  There are many that don’t have much faith in Benson, but last week, we saw the Bengals run the ball a total of 33 times and finished with a total of 139 yds on the ground. With a young passing & receiving core, Cincinnati will rely on their ground game against a weak Denver D.

Last week, the Hillis train pumped its breaks some in CIN and didn’t break out as much as some expected.  However, this week Hillis owner will be cashing in on a fragile Indianapolis run defense. Although I am torn on who will be the victor in this game, I know that the performance of the Houston ground game was impressive even without their main man Arian Foster. McCoy has come out looking strong this preseason and in Week 1, which is going to create a lot of running lanes for the Cleveland Bruiser Peyton Hillis.

It appears that the second year man out of Buffalo has proven himself to be a premier back in Green Bay. Last week, Starks had 12 carries as opposed to Ryan Grant’s 9 carries and word on the street is that his load will increase even more this week.  The Green Bay passing attack is relentless and this opens up a lot of lanes for the talented young back. Starks averaged 4.8 yards a carry and snagged a TD in last week’s game and we shouldn’t expect this to be a fluke. It is likely that Green Bay gets ahead against the Panthers and that would mean more opportunities for the running game in GB.

Now that I have mentioned three backs that have favorable matchups this week and should produce top RB Fantasy Points this week, I am going to include a brief section on some “must starters” that could end up having a disappointing output this week. These caution flags are merely warnings based on the interpretation of the stats and the matchups this week. In 14+ leagues, you really have to start your studs regardless of matchup because of lack of depth, but if you are in a smaller league with other options that have more favorable matchups, beware of the following starters:

Yikes, this is a touchy subject here. CJ2K just got paid. And now he needs to play like he’s worth the investment. He has the potential to blow out any defense at any time, yet this week’s matchup could make him a trade target in a lot of leagues. Last week, CJ had a difficult game against a Jacksonville team and now he faced a Ravens’ defense that absolute destroyed Pittsburgh. Use extreme caution this week when deploying CJ2K.

Shonn Greene has been a big question mark to the fantasy world the last 2 years. Do you start him? Do you pick him first round? Is he ever going to break out? All the signs in New York say he’s their number one guy, but he just hasn’t produced like a number one. Jacksonville bulked up their run defense over the off season and managed to pin down CJ2K last week to a measly 24 yards on 9 carries; add that with LT in the mix, Greene is definitely a questionable start this week.

Team: The team that is being evaluated for their defensive strength.

Y/G: Total rushing yards given up per game

Average: The average of each each individual ranking. (this corresponds to the overall ranking)