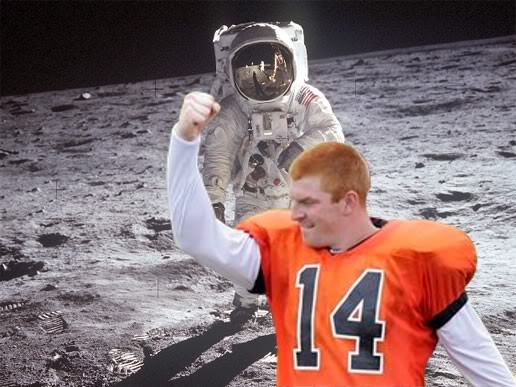 In an epic battle between crab cakes (YAY) and skyline chili (BOO), the Ravens will bring their AFC North leading record of 5-2 to Cincinnati, a city that I’ve heard has paved roads, unlike Cleveland. Interestingly enough, the teams have met already this season, but it’s okay if you forgot, as these teams seem completely different from their previous match-up when the Bengals won 23-16. Said Bengals went on to win their next two, and with a 3-0 start, looked like one of the best teams in the NFL. But I guess getting tired of looking competent, the Bengals went to their safety zone, aka, they went Bungles the next three games by losing two, and tying in one. Though, I’m pretty sure a tie is a loss, seeing as it’s described as kissing your sister. Sorry, I’m not from Alabama, that’s a complete loss for me. Speaking of a loss, I have no words to describe the eliteness being shown by Joe Flacco. It’s almost as if his eliteness went on a cocaine binge and then he decided to make things interesting by adding mescaline as a side garnish. Of course, having a resurgent Steve Smith on a successful 2014 baby-punching tour certainly helps as well. Will the Bungles Bungle? I can’t wait to find out. Because Ginger.

Week 8 Rankings have been updated for today’s games, for all your roster needs. You can check them out here.

A.J. Green is not expected to play. Probably getting back at me for enjoying life this week. Thanks man.

Shonn Greene was arrested. The California Penal system’s fantasy team is pretty much stacked this year.

Reggie Bush is inactive, which is a shame, because we all need more Bush, amiright folks?

Lions vs. Falcons (9:30 AM ET)
Lions vs Falcons | FindTheBest