My apologies for dragging MB through the mud last week on Ryan Fitzpatrick. Sorry MB. I’m stupid. You’re smart. I was wrong. You were right. You’re the best. I’m the worst. You’re very good looking. I’m not very attractive.

Sorry, football and Clueless movie quotes probably shouldn’t mix. They should be kept separated like church and state, milk and hot weather, the gun and the cannoli, and after week 2, apparently football and defense. Let’s take a look at what B_Don’s streaming service, FootballFlix, has for you this week in the ‘recommend for you’ section.

Ryan Fitzpatrick – 40% owned
It’s the week of the Ryans and I’m not talking Rex and Rob (or for that matter my best friend who is also named Ryan). Only fitting after using Fitzy in the opening for 2 weeks in a row that I finally put him in this section. He’s had back to back weeks with 400+ yards and 4 touchdowns. This week he gets the spotlight on Monday night vs the Steelers who gave up 21 points to the Browns and gave up twice that amount of points in the game vs the Chiefs.

Fitzpatrick may be in the middle of a position battle in week 4 when Jameis Winston returns from his suspension, but for week 3, he’s all set to go. Fitzmagic has been firing on all cylinders. Feeding Mike Evans, finding Desean Jackson for long TDs, and exploring the developing 2nd year options in OJ Howard and Chris Godwin.

The Steelers pass defense looks really bad on the season statistically, but that will happen when Patrick Mahomes puts up 6 TDs in a week. I actually believe the Steelers defense is likely at least league average if not a little better, so, this is not a referendum on the defense, but an acknowledgment that Fitzmagic would beat Gryffindor single handedly right now.

Ryan Tannehill – 37%
I know 3% less owned doesn’t seem like much of a deep option, but Tannehill is one of the lowest owned starting QB options on Fantrax. Sam Bradford and Josh Allen are the only starting QBs owned in less leagues and they face the Vikings and DA BEARS this week.

Tannehill is averaging 18.85 points per game this season and has a pair of touchdowns in each game this year. The excitement from the first game where the Dolphins appeared to open up the offense a little was quelled last week by the return of check down Tannehill, but he controlled the ball in week 2 and the Dolphins are 2-0.

There’s definitely a chance that Tannehill misses out on the TDs this week, but I am unconcerned by the Raiders defense sans Khalil Mack who have a whopping 2 sacks and 1 turnover on the season.

Austin Hooper – 46%
The Saints have done a good job of keeping tight ends out of the end zone so far this season, unfortunately, they have not stopped anyone else of the field. There’s more resistence in a whore house than there has been for the Saints defense. Despite keeping tight ends out of the endzone, the Saints have allowed tight ends to be involved in the game as David Njoku ended up with 4 receptions and OJ Howard caught 2 for 54 yards.

Hooper has been a solid tight end this season in his own right. Among tight ends, he’s 8th in receptions, the best reception rate for TEs with at least 7 targets, and 12th in total yards. All that is to say that he’s not being phased out of the offense and that the 46% may be slightly low for his ownership percentage. Delanie Walker is out for the season and has a higher ownership percentage than Hooper!

Ian Thomas – 16%
Ian has a special place in my heart as one of the few NFL players who went to school at Indiana University. That’s really no surprise as basketball trumps all in Indiana (my home state) and the tailgating is taking much more seriously than the game. However, the Indiana product is going to be given every opportunity to grow into a more prominent role as he was on the field for 63 of the total 76 offensive snaps for the Panthers last week.

When my podcast co-host, @DonkeyTeeth87, and I reviewed the rookie TE class, I thought that he showed good body control near the borders, the ability to extend the play despite pretty average TE speed, solid but unspectacular hands, solid blocking, and was noted as a hard worker and a team favorite for the Hoosiers. He’s also dealt with some adversity in his life as he was raised by his siblings from the age of 9 and he was a 3 sport athlete in high school playing football, basketball, and track.

The Bengals have allowed the most points to tight ends this season. I know that’s a small sample, but they were also poor against the tight end in 2017. In 2017, they were tied fro 4th most receptions allowed to TEs, the 8th most yards, and were in the bottom half of fantasy points allowed to the position.  This season they have allowed 74 yards and a touchdown to the trio of Baltimore tight ends and 11 receptions for over 100 yards and a touchdown to the Colts combo of Doyle and Ebron.

Jets – 52%
Maybe I just like picking on the Browns, but that’s kind of like picking on the kid who snitches on everyone, they kind of deserve it. 8th lowest points scored by the offense this season, bottom 10 in total yards, 7th lowest completions, and 6th lowest passing yards. They have had some success running the ball, but remember a third of their rushing yards have come from Tyrod Taylor who also took 7 sacks against the Steelers and 3 against the Saints.

The Jets are tied for 6th best in points allowed this season and have the 2nd most turnovers created of any defense. They have at least an interception and a fumble recovery in both games so far. It is fair to look at their opponents and wonder if it’s more the defense or the teams they’re facing as Stafford looked horrible in the opening game and then they faced a rookie QB in their 2nd game, but the defense has yet to allow either opponent to reach the 20 point mark.

Last year we began to see Todd Bowles defense come together and I think we may be seeing what it is capable of here in the early part of the season.  The defense itself may lack true stars, but is a solid squad as a whole. Maybe the biggest piece missing is a true pass rushing threat, but I have already mentioned Tyrod’s issues getting the ball out in a timely manner.  As Jon Gruden is finding out in Oakland after trading Khalil Mack, it is difficult to find an elite pass rusher for your squad these days. Nobody is buying that you aren’t regretting losing one of the best in the game. 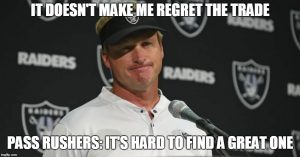 Dolphins – 15%
The Dolphins defense has allowed the 4th fewest points this season, have the 3rd most takeaways, tied for the 6th best scoring percentage, 3rd best in rushing yards per attempt, and are tied for the league lead in interceptions.  It is fair to question the strength of schedule as they have faced the Titans and Jets who do not have what you would call, powerhouse offenses. However, the squad is playing much better on the defensive side of things than they showed last season after adding some pieces in the offseason despite losing Ndamukong Suh in the off-season.

The other piece of this recommendation is the opponent. The Raiders (I always read it in the Chris Berman voice) have been held under 20 points each week so far. While I was a fan of Derek Carr coming into last season, I can’t help but notice that it looks like he’s lost his confidence that he displayed in 2016 when we expected that a breakout may be coming. Carr has become Alex Smith all of a sudden and makes 1 read and then immediately checks down.

The Raiders have the 5th lowest points scored this year (to be fair they have faced the Broncos and Rams). The Raiders as a team only have 3 offensive touchdowns on the season, which means they have less TDs than Todd Gurley, Tyreek Hill, and A.J. Green by themselves. Lastly, the Raiders defense has allowed a 100 yard runner in each game so far. So, I expect that dolphins should be able to control the clock in this one, which should further limit the amount of offensive possessions that the Raiders get in this game.