Controversy struck the Ditka, Sausage, and Fantasy Sports podcast this week. If you didn’t know, that’s the podcast that I do with Donkey Teeth here on Razzball (shameless plug). Anyway, we have our season long bets that we refer to as stogie bets. We started with steak and liquor, but that was stolen from another podcast and Donkey Teeth doesn’t eat steak so that reward was pretty tilted toward one side. As Ditka-ites, Ditka followers, Ditkaheads, we both enjoy a nice cigar and decide on stogie bets.

One of those bets was whether Tyrod Taylor would start for the Browns all season or not, barring injury. That was the bet and no more was said about it. Well, Tyrod got hurt in week 3 and we had the first Baker Mayfield sighting. Tyrod was concussed and didn’t return to the game, and Baker has been announced as the starter for week 4 regardless of Tyrod’s health situation and clearing the concussion protocol.

We were split in our interpretation of the injury clause. My case being that even once Tyrod is cleared to return, the Browns have said that Baker is the starting QB. Donkey Teeth’s case was that Tyrod was injured, and while he believed in Baker Mayfield long term, he did not believe that he would get the opportunity if Tyrod didn’t leave the field for injury. Both are valid points and thus, we asked for help. Where else does one go to resolve a dispute these days, we took to social media and I posted a poll on Twitter. After 48 hours, we had a split decision. 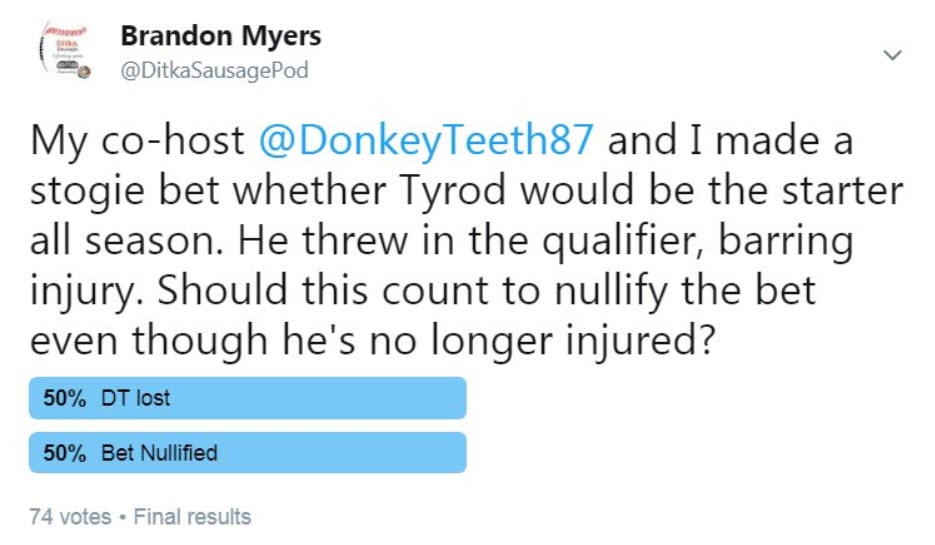 To resolve the issue we enrolled the assistance of a Razzball triumvirate of Grey Albright, Rudy Gamble, and Matt Bowe (MB). Rudy weighed in first on Donkey Teeth’s side.

Then, MB put a tally in the B_Don side.

Grey made the final vote (which I will admit, we had to read a few times to make sure we got the correct winner) and sealed it for me. But it was a split decision the whole way, which likely validates both sides to some extent. I’m interested to hear what you, the reader, has to say about the topic and which side you would have voted for in the poll. 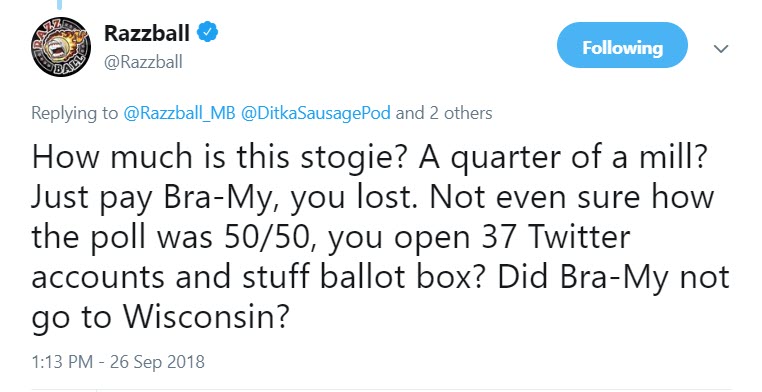 I am not an Andy Dalton truther. His overwhelming mediocrity and tendency to completely fall off the map have been problematic for the Bengals, and fantasy owners. Andy Dalton is the 8th highest paid QB in the league, and likely belongs closer to Bortles than Cam Newton.

However, they are throwing the ball in Cincinnati (7th most pass attempts) and without Joe Mixon for another week I expect that trend to continue. Dalton is 13th in total yards and tied for 3rd most touchdowns at the position. So, the stats have actually been solid for fantasy purposes. Despite all my trashing of Dalton, he does come in 7th best Defense-adjusted Yards Above Replacement, 8th in Defense-adjusted Value Over Average, and 7th in QBR. He’s playing about as well as we’ve seen him perform and is going against a Falcons defense that has been ravaged by injury.

The Falcons came into the season with the expectation of having an above average defensive unit after finishing 2017 in the top 10. However, key losses of Deion Jones, Keanu Neal, and Ricardo Allen have left the defense looking like a shell of the group they were at the start of the year. They are currently the 25th worst defensive unit, have given up the 6th most yards, 8th most points, 5th most rushing yards, 7th most passing yards, and the 3rd most completions.

Future hall of famer found in the scrap pile. Eli has been relegated from prime time on a major network to a crappy spin-off on the CW. It’s not even the type of show that you watch every week. Rather, you wait for it to hit the streaming service and FootballFlix has this one queued up for you in week 4.

The Giant offensive line is still a mess, which was fairly predictable coming into the season. I think it may be improving slightly with more time in for the new faces there, but it’s pretty abysmal still. However, Eli does have some nice weapons available to him in New York. Evan Engram is going to be out 2-4 weeks with a sprained MCL, but Eli still has Odell, the dump off valve in Saquon Barkley, and I expect a bump in Sterling Shepard’s production with the absence of Engram.

There are a lot of dump offs, but Eli has the 3rd best completion rate this season. While not amazing, he’s been pretty much middle of the pack statistically. 15th in yards, 15th in adjusted yards gained per pass attempt, 19th in each of Defense-adjusted Yards Above Replacement, Defense-adjusted Value Over Average, and QBR. While we may not be looking at the Eli of old, he’s still pretty much a league average guy in a good match-up.

Speaking of the match-up. Let’s go back to my favorite punching bag for the season. The worst colander in sports. You try to drain and rather than stopping anything, it just passes right through. O wait, there is no colander and we’re just pouring it down the drain? That is about what it’s been like going against the Saints defense. The Saints defense is tied for 6th fewest sacks (bodes well for Eli’s O line woes), they’ve given up the most fantasy points per game, 3rd most passing yards on the 4th fewest attempts (yes you read that correctly), and the unit has a single, 1, uno, takeaway on the season. Good news, they have the 3rd fewest penalties on the season. Of course, they haven’t actually been close enough to anyone to draw those penalties.

We have seen O.J. Howard take a step forward this season with the great Ryan Fitzpatrick behind center, but Brate finally got involved last week with 3 receptions for 34 yards and a touchdown. Da Bears don’t have many weaknesses on the defense, but they do seem to have trouble with the tight end, especially closer to the end zone. They’ve allowed tight ends in back to back games to score a touchdown (Will Dissly and Ricky Seals Jones).

This is also a pseudo pickup recommendation for the rest of the season. Fitzpatrick has been great other than the first half in week 3, but Jameis is the future and I can’t imagine the Bucs not giving him back the reins sooner rather than later despite the Fitzmagical performances. Jameis is owed almost $21 million next season and then will have to be franchised or extended.  That’s a lot of reasons to want to see him on the field, and the reports have been glowing about his performances in practice.

But why does that matter for Cameron Brate? While Fitz has locked in on O.J. Howard a bit here in the early going, Jameis targeted Brate 77 times last year for 48 receptions compared to only 39 targets for 26 receptions for Howard. There could be a change in the tight end target share in Tampa Bay and I think you can get ahead of it by scooping up Brate now.

The Colts defense has surprised me this season by not being the worst group in all of football. That is not to say that they are a strong defense, but have turned in some better performances so far than I was expecting. However, they are still not a very strong unit and have been poor against the tight end position.  Eifert had 3 receptions for 44 yards; Jordan Reed had 6 for 55, and last week Dallas Goedert and Zach Ertz had productive days with 73 yards each and Goedert got in the end zone. The Colts defense against tight ends has given up the 7th most fantasy points, the most receptions, and the 3rd most yards.

Houston has not been a team that traditionally targets the tight end, but this match-up and the availability of Griffin makes him an interesting streamer for me. Griffin is seeing almost 80% of the offensive snaps for the Texans and appears to be the clear #1 TE in the offense. I don’t think that Griffin is a special receiving talent, but do believe there is some room for him to make something happen this week.  Both Will Fuller and DeAndre Hopkins are on the injury report this week and the Texans could be looking to get others involved to take some of the work off of those guy’s shoulders. I also like Lamar Miller in this game for similar reasons.

This is not the Legion of Boom Seahawks defense that carried them to back to back super bowl appearances. This squad is much closer to middle of the pack than best defense in the league. The only thing really holding the defense together is Earl Thomas being a complete monster that makes up for a lot of the other defensive miscues. They’ve are 15th best in points allowed, 17th best in total yards, and 3rd in takeaways.

The better reason to trot the Seahawks defense out there this week is that they are playing the offensively inept Arizona Cardinals. The Cardinals have scored 20 points this season, which only puts them 52 points behind Ryan Fitzpatrick. If you double their total points, they are still the lowest scoring team in the league behind the Cowboys.

The Cardinals finally reach a tipping point against DA BEARS and put in first round draft pick, Josh Rosen. I did have Rosen as my #2 dynasty QB, but also expect there to be some growing pains as he figures out the differences between college and the NFL. It seemed like an odd scenario last week to put him in against a very good Bears defense in the 2 minute drill after coming off the bench cold and not playing all game, but hey, what do I know? It worked for Julie the Cat Gaffney in D2. 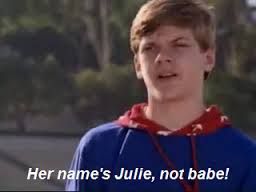 I opened the article with the discussion about the Browns quarterback scenario and the stogie bet that my co-host and I made in the pre-season. While that doesn’t directly affect my recommendation of the Browns defense, I did see that the whole team seemed to get a boost when Baker Mayfield trotted out on the field last week. It’s going to be Baker’s first start and I’m not even saying that the offense will perform any better, but if the team rallies and plays harder for one quarterback over the other it has to be a consideration.

The Browns truthers in the pre-season pointed to the improved defense and the addition/return of a few offensive pieces (one of which is now in New England). Well, I think the defense has lived up to their improved billing and while the games have been messy, the defense has held up. They have given up the 11th fewest points, 13th fewest yards, and lead the league in takeaways.

They take on the Raiders this week who have the 5th lowest points scored and have 5 turnovers, which is the 8th most in the league. The Raiders do have the 6th most yards, which is not ideal, but they have not shown the ability to turn those yards into points. Carr is 19th in adjusted yards gained per pass attempt as he has yet to show the confidence to push the ball down the field like we saw in 2016 He is making his first read and then looking for his check down, which may limit the turnovers, but also limits the damage that the offense can cause.