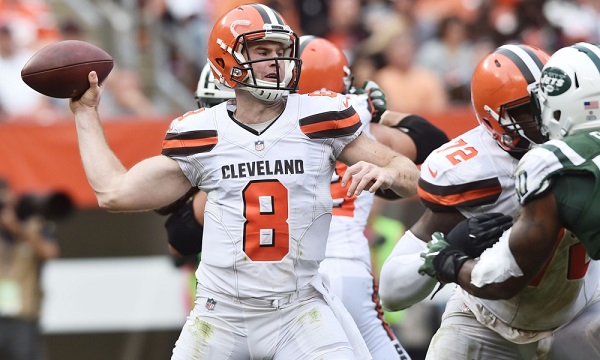 Kevin Hogan – I know what you’re thinking. “He must be extra level don’t give a f*ck to put a Brownie in here.” But Hogan has looked good this year, even extending back into the preseason (cue the “but it was against seconds stringers” comments). The Browns run game is terrible and there’s a probability that Hogan leads the team in rushing yards. But there’s also the factors on the other side of the ball that make streamers tempting plays. Houston will be playing their first week sans J.J Watt and Whitney Mercilus, plus they are still working through some injuries in their secondary. And we know the Browns will be playing from behind because the saucy Deshaun Watson will be racking up the point totals on them. If Cleveland has a snowball’s chance in hell of staying competitive in this game, it will be because of Kevin Hogan.

Jacoby Brissett – Back on the list for a second straight week, Brissett could have really used at least one passing touchdown to live up to what I wanted last week. I’ve crapped on the Titans defense before in this space and I’ve seen Brissett play well in tough primetime games (or at least half of one in Seattle). I know people are stoked about the Marlon Mack attack, but Brissett is still on my streaming radar as we navigate these bye weeks. The points he adds with his legs are valuable for the streaming conversation, and I have no problem going back to the well with Jacoby.

Tyler Kroft – I know he’s on a bye, but with the news that Tyler Eifert is going to undergo season ending back surgery, I’m surprised that Kroft’s ownership percentage sits here at 11% on Thursday morning. If you can get ahead of the rush next week where his ownership percentage will most likely creep up into the 50% range, I would advise doing so.

Darren Fells – I would have also liked to put Tyler Higbee’s name here as I continue to go completely off the radar, but Eric Ebron is not playing good football. The Lions get the cherry Saints matchup and I think Stafford could be in for a big day. And if in the big day Fells can go for 40 yards and a score, it’s all gravy baby. What more can you really expect from a streaming TE? Can’t be expecting Week 5 Ed Dickson numbers. Roll those bones.

Austin Hooper – If you’re looking for someone a little more mainstream, may I suggest Austin Hooper? The Falcons are a bit banged up, especially in their receiving corps. Mohamed Sanu missed Wednesday’s practice entirely and if Hooper is going to see anything in the way of the 7 targets he saw in Atlanta’s last game, he’s someone I’d be interested in deploying. Or maybe it’s just the Falcons bias. Who knows.

Atlanta D/ST – MOAR BIAS! Barely makes the 65% cut, but you can’t pass on a Miami matchup. Cutler will provide many opportunities for the Falcons D to rack up sacks and INTs. Smoking Jay hasn’t thrown for over 250 yards this season and the only white line the Dolphins can find is apparently on a stripper as they’ve scored 3 offensive TDs in 4 games. Hopefully the Falcons come out with a little bit of intensity seeing as how they’ve rolled over in the second half of almost all of their games and actually ended up losing against the Bills. Quinn should have his boys fired up coming out of the bye week against a Dolphins team that already looks worn out from the season, even with the Week One bye. The words of Robert Frost come to mind for Miami – “and miles to go before I sleep”. It’s gonna be a long season.

Green Bay D/ST – The Packers D is still vulnerable to good offenses, as we’ve seen in their tilts against the Falcons and the Cowboys. But they’ve been streamable in their matchups against subpar offenses, which is where I would classify the Vikings as of right now. I expect Case Keenum under center this week again. The 369 and 3 TD game against the bruised Buccaneers seems to be the outlier for Keenum as he has thrown just one 1 TD in his other 3 starts and has yet to eclipse 220 yards in those other games. Plus, Minnesota doesn’t have a history of putting up large point totals on the Packers in the first place. Hopefully a lot of Jerick McKinnon (lo siento if you blew all that FAAB on Latavius Murray), or else this could be a long day for Vikings fans, even with the game in Minnesota.

Harrison Butker – May not be as cool of a name as Fairburn from last week, but Butker is kicking butt (seriously, sometimes the poetry just flows right out of me). And we’ve already spent too much time on kickers. Until next week!