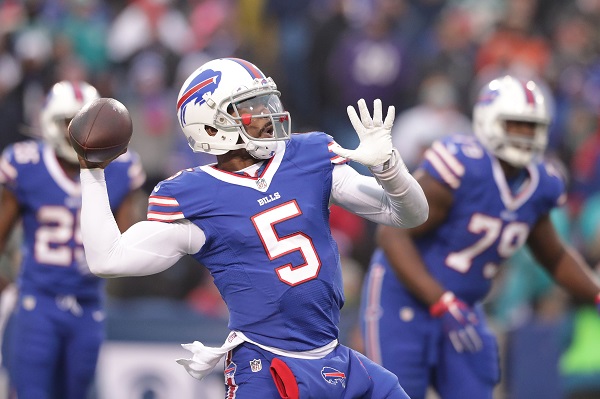 Tyrod Taylor – Tyrod will get the Mafia buff this week at home and draws a Buccaneer team that has been less than inspiring on defense (see also: dogsh*t). At home he’s been 200+ and multiple TDs, and given the wasteland of QB streamers this week, it might be enough to get the job done. Rough matchups for guys you’d like to roll the bones on in Jacoby Brissett, Andy Dalton, Jared Goff, Jay Cutler, Case Keenum and Josh McCown. Trevor Semien will be minus Manny Sanders. Give me the Mafia bump (not the kind those rabid animals are doing in the tailgating lots) and TyGod this week.

CJ Beathard – If you’re expecting an Iowa homer argument for me on CJ Beathard, you’re going to be sorely disappointed. But I do think Kyle Shanahan can work some magic for Beathard (so funny to type his name, sorry I’m a 9 year old humor-wise). Dallas has allowed a lot of fantasy points to QBs, and I don’t think the 49ers would be quick to pull a Kevin Hogan and go right back to what they were doing before. I think you have to see what Beathard can do, just like how the 49ers are wanting to take a look and see what Matt Breida can do for them. I’d definitely put Beathard over Brett Hundley and Mitchell Trubisky if you are going through the younger guys.

Adam Humphries – I usually don’t go the route of WRs in this article. But we gotta give love to Adam Humphries (if nothing else because MB needs a Bucs W somehow). 7 or more targets in 3 of his last 4 games, and the one he didn’t hit that mark was a 5 target game. Brought in 15 of the 19 targets he’s seen over the last 3 weeks. And this is with a healthy Tampa receiving corps. It reminds me anecdotally of like an Adam Thielen last year. Keep his name on your waiver wire speed dial.

Austin Hooper – I don’t even want to write anything about the Falcons because it’s just going to make me sad. Giving up 20 unanswered points in the second half to lose the game.. I wish I could say I was surprised, but I’m not. In these two disaster losses for the Falcons, at least Hooper has pulled in 12 of 16 targets. PPR fans delight! With the yellow light on Mohamed Sanu probably this week, look for Hooper to get another steady dose of targets as the Falcons look to blow another in the waning minutes.

George Kittle – “ANOTHER HAWKEYE ON THE LIST?!?!” Yessir. These are the things you like to hone in on when looking for streamer plays. Chemistry, prior connection. Kittle and Beathard have it from their time together at Iowa. Kittle trails Pierre Garcon and Marquise Goodwin to rank third on the team on targets and given the current situation I don’t see that changing.

Cincinatti D/ST – These Steeler/Bengal games are usually pretty good, and I don’t mean that we always see big stat performers. Ben Roethlisberger doesn’t have the greatest history against the Bengals. Sure he’s still got Leveon Bell and Antonio Brown up his sleeve, but the rest of the team has been kind of sluggish. This Bengals D has gotten 6 sacks in 2 of its last 3 games, an INT in 4 of it’s first 5. While I don’t believe the whole “Ben is toast” thing or the whole “Martavis Bryant trade” thing, I think it will be a semi-unproductive day for the Steelers and a good chance to plug this Cincy D in your lineups.

Dolphins D/ST – I know everyone is swooning over Josh McCown after his performance against the Patriots and the Jets having a good record this year. But I will always take the opportunity to go against Todd Bowles and the Jets. Even if Bilal Powell is good to go, I’m not worried. Do you really feel confidant in any of the Jets receiving options? If you had to put your mortgage payment down on one of these guys to top 70 yards, could you even pick one? Has it been so long that we’ve forgotten the #BecauseJets hashtag? I’m bringing it back like cooked crack.

Stephen Hauschka – Back from bye (which means you don’t have to mess with it anymore), Hauschka converted three or more field goals in the three games prior to the bye. Five of those ten were from beyond 40 yards if your league counts extra for long field goals. The Bills are puttering on offense, but Hauschka could be what keeps them enough games.