Happy Halloween! Or belated Halloween since you’ll be reading this after all the kids have gotten loaded up on sugar and the adults have let out their inner child, demon, or slut. At least a couple of the Razzball crew had sports themed costumes. Who would’ve guessed that sports obsessed people would then look to sports for a costume. My office costume this year was Bill Murray from Space Jam, unfortunately, I do not have any photos. However, I won’t leave you hanging on photos, as this is a former sports Halloween costume that I wore when I went as Kim Jung and hanging with my friend, Dennis Rodman. 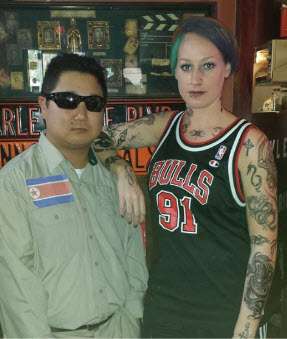 You may have seen this one before as we’re kind of a big deal…For the record, I was bending my knees to give more of the proper height adjustment to the costume photo.

Razzball’s own MB went as his favorite player in 2018. 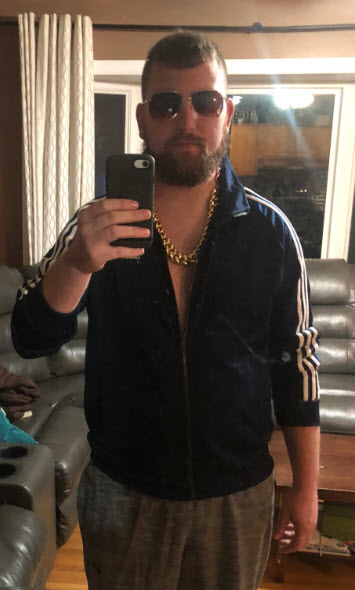 If you have any sports related costumes, tweet them to me @DitkaSausagePod and I’ll retweet for everyone to see!

I am living in a different place than last year and being a responsible member of the community, of course I bought candy for trick or treaters. Well, not a single trick or treater showed up at my door and I now have a full bucket of my favorite candies sitting on my counter. I’m sure that will do wonders for my waistline. Hopefully, these players that I’m giving you to stream this week will be more treat than trick as we reach trade deadlines and the true playoff push. 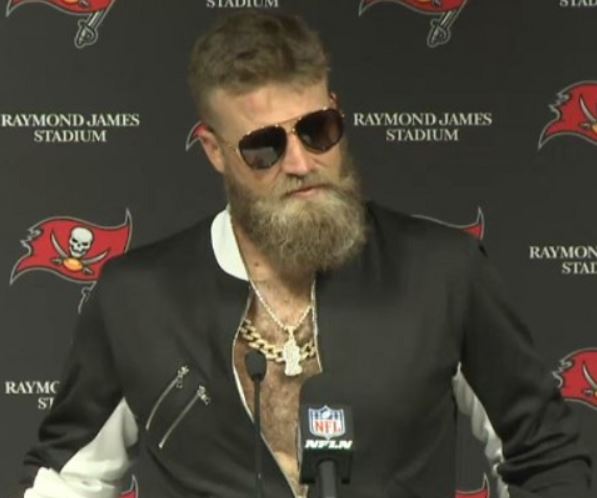 The inspiration behind MB’s costume has the starting job back in Tampa Bay, for now. I’m not sure how long it will last as the Bucs are likely on the outside, looking in of the playoff picture. Fitzpatrick is a 35 year old on a 1 year deal compared to Winston at 24 that is owed $21 million in 2019 before becoming a free agent. Needless to say, the Bucs may want to get more of a look at Jameis before paying him and asking him to be the face of the franchise for the foreseeable future.

Jameis and Fitzpatrick are eerily similar in their mindset. Each has the ability to win and lose games, but will continue to throw it around the yard as though nothing happened regardless of the outcome. We saw bad Jameis last game to prompt this change, but erratic Ryan is always waiting in the wings too.  All of that is to say, I’m not sure that you can pick up Fitz as your QB to start the rest of the season, but for this week, he’s likely the best streaming option that is available in the most amount of leagues.

On the season, Fitzy has performed well when given the opportunity, for the most part. At least for fantasy purposes, he currently has the 2nd highest fantasy points per game among all quarterbacks. He is also 6th in passing yards per game, and leads the league in yards per pass attempt and yards per pass completion. He’s pushing the ball down field, much to the delight of Desean Jackson who went from early season surprise, back to pumpkin, and then asked to be traded.

Given the other options on the waiver wire this week, I believe that Fitzpatrick is likely your guy if he’s available, but it is not an ideal match-up for the Bucs and Fitzmagic as the Panthers defense has been one of the better units in the league. The Panthers have allowed the 7th fewest points and the 8th fewest yards. They have been a little more susceptible to the pass as they have allowed only the 11th fewest passing yards and the 12 fewest fantasy points allowed to the QB position. The Panthers secondary appeared to be a mess coming into the season, but rookie Donte Jackson is playing as well as any rookie defensive back, and Eric Reid turned in one of his best performances as a professional last week.

Alex Smith is the complete opposite of both quarterback options in Tampa Bay. While they may win you a week, it’s also possible that they blow it and leave you in the position that Jameis left many of us last week. Speaking of, on my podcast, Jameis was the a**hole of the week. Jameis and Fitz have that kind of volatility, but Alex is the model of consistency.  He has been between 14 and 23 fantasy points in every game this season, and in your bye week or as your streaming option, banking a number of points with certainty can be beneficial.

Alex also gets to face the banged up Falcons defense. I’ve ripped them in previous streaming articles, and it’s not their fault that injuries have ravaged the entire team, but they do make for a nice match-up at this point. The Falcons have allowed the 7th most total points on the season. They have not fared well against the pass as they have allowed the 6th most passing yards and 4th most passing touchdowns, which has translated to allowing the 3rd most fantasy points to the quarterback spot. Go ahead and stream Alex Smith with confidence this week, even if he doesn’t yield a week winning performance.

Yes, my 2 honorable mentions from last week are in the column this week, but that’s because I think both may be more than just streamers and could be your TE option for the rest of the season if you’re looking around in these ownership areas.

Vance started the season a bit banged up and missed the first game, but has begun to show why he is the #1 tight end option over Jesse James. While James has shown flashes of fantasy goodness, I believe that was mostly based on opportunity and Vance is the superior talent in Pittsburgh.  Vance is an athletic guy with some run after the play ability. He’s a fierce competitor that will take the fight to DBs and LBs alike. Even missing the first game of the season, he has the target lead among the Steelers tight end duo.

Vance has not found the end zone much this season, but has established himself as part of the offense and I think the match-up plays into the yardage gains. The Ravens have allowed the 14th most fantasy points to tight ends, but they have given up the 8th most yards and have been saved by allowing only 2 TDs to tight ends. To be fair, they have really only faced a few quality tight ends, Olsen, Njoku, and Eifert. The first time these two teams met, Vance was tied for the most yards on the Steelers with Antonio Brown, and I expect him to reproduce those efforts to some extent. And as with tight ends, you hope he finds the end zone.

If you’re hoping that your streaming option at tight end finds the end zone, there is only one tight end that has scored a touchdown in each of the last 3 weeks. You guessed it, it’s Chris Herndon. Herndon is still splitting snaps from the tight end position for the Jets, and no, I don’t know why, but it seems pretty clear that he is the receiving option from the position at least.

2nd lowest over/under line of the week for good reason. Neither team has been strong on the offensive end, while the defenses have been carrying the teams. I was going to write this all up, but I thought the charts below would do a better job considering the two teams are facing each other. Ranks are based on the best to worst. So, 1st is the best in that category. 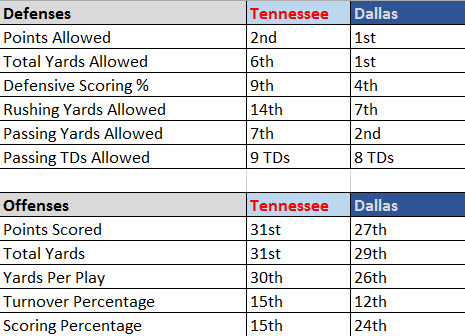