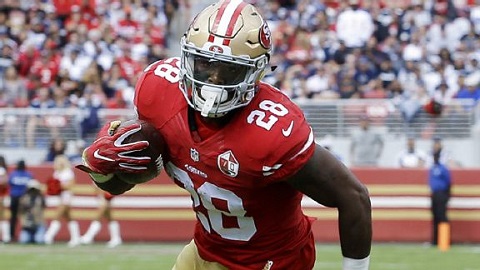 Colin Kaepernick – I guess the game plan of opposing teams playing the national anthem on third down so that Kaepernick would take a knee didn’t work out as expected. He ended the game two yards shy of 400 yards passing. For those of you deficient in math that would be 398 yards. He threw for 2 touchdowns, racking up over 23 points. I think he’s going to be a sneaky play the rest of season with some big games and some not so good games. He does have top ten potential every week. As a person, however, I think he’s a shithead.

DuJuan Harris – Usually when it comes to San Francisco and running backs the discussion is about the opposing running back being a must start. That’s still pretty much the case, but last week it turns out even the 49ers running back was a good start. While Harris only ran for 59 yards, he also tallied 83 more in the air, catching 5 of 6 targets. With over 100 yards from scrimmage and a receiving touchdown, DuJuan was a top five back! While Carlos Hyde is out, Harris should be owned. Not a great matchup this week against Arizona, but I still think he had made a case to be rostered.

Tim Hightower – I love it when a plan comes together. Last week I picked Hightower to earn this honor and it looks like I picked a winner. Feels good to get one right every now and then. With 23 carries Hightower rushed for 87 yards and a touchdown. Here’s the interesting thing, Mark Ingram ended the game with 15 carries and 158 yards. Now, that includes a 75-yard run which has the tendency to skew the numbers. For shits and giggles, let’s ignore that run. That leaves Ingram with 14 carries and 83 yards. While that’s still slightly better than Hightower, I think Hightower is showing that he is just as good as Ingram. Timmy boy needs to be owned as I think you are looking a 50/50 time share.

Rishard Matthews – Did this dude’s parents just not know how to spell Richard? Is Dick still short for Rishard? Either way he had his best game of the season with 6 catches for 63 yards and 2 scores. Is it a coincidence that he had his best game and he also saw a season high ten targets? I think not. Even though he does have 5 touchdowns on the season, I still would not feel comfortable starting Rishard. Spell checker doesn’t like his name either.

Taylor Gabriel – Why do I have the constant urge to sing “In Your Eyes” every time I say this guy’s name. Gabriel caught all 5 passes thrown to him for 55 yards. He has now caught his last 8 targets over the last two games. Five for fifty-five isn’t all that great, but what got him in today’s post was a nine yard touchdown run. I’d watch Taylor, but I wouldn’t be adding him quite yet. Love I get so lost, sometimes…

Vance McDonald – Old McDonald scored some points. E-I-E-I-O. When your tight end has 84 yards and a touchdown you’re going in the right direction. Vance had a 65-yard touchdown. End of story. I’m leaving McDonald on the farm. I would like to mention that last week I predicted Jason Witten to earn this honor. Technically he did. Witten was the second best tight end last week (behind Jimmy Graham). However, between the time I wrote last week’s post and today, Witten’s ownership has risen to 79 percent rendering him ineligible.

Kapri Bibbs – First of all I like to say “funk you Devontae Booker”. Thanks for taking a big sh!t on my lineup last week. Bibbs finds himself here because of a 69-yard touchdown reception on a screen play, but pair that with Booker’s flop, he might have just earned himself more touches. If I had the roster spot I might take a flyer. He has a nice matchup this week against the Saints.