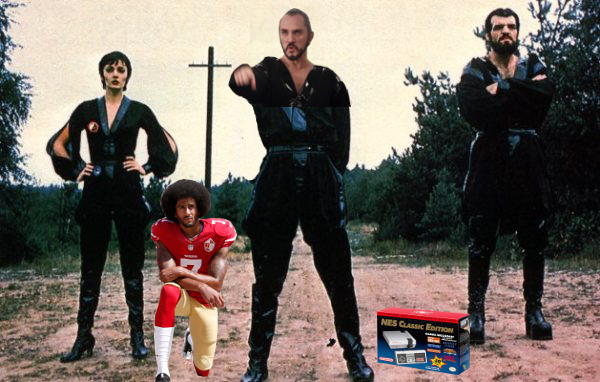 Being that the kind people at Razzball have given me a soapbox, if you will, to share with you all the thoughts that swim within my head, I thought I’d take advantage of said opportunity to rant. If you can bear with me for a few sentences I promise to return to regularly scheduled programming and, as I do on a weekly basis, tender my slightly above average fantasy football advice. And when I say “average” I really mean “mediocre”. And when I say “mediocre” what I REALLY mean is “fvcking awesome”. Okay, so perhaps I’m reaching for the proverbial stars, but why not. After all, I could probably give you crap advice and many of you would still be happy. Stealing a quote from Negan, I could be inclined to say “I just slid my d*ck down your throat and you thanked me”. But that’s not how I roll.

Nintendo Classic. Have any of you purchased one at retail price? Seriously, WTFN! That stands for “what the fvck Nintendo”. I understand the limited quantity launch back on the 11th, but to not have the shelves overflowing on Black Friday seems like a giant blunder on the part of Nintendo. Can anyone say “underestimating consumer demand”. Unless it’s just their way of saying “fvck you” to their fans. And yes Jay, I am attempting to see how many times I can say the “f” word until you start censoring me. Am I allowed to talk to the boss in the middle of my post? Can I get a ruling on that please. [Jay’s Note: Uh, wait until to see how long the controller cord is. Then let’s talk.]

Nintendo Classic. I just started two paragraphs in a row with the same two word sentence. Is that even a legit sentence? My daughter was sick so we didn’t travel for Thanksgiving. At about 11:30pm while I was working on my MAME machine in the basement, I said “fvck it”, put down the orbital sander, got in the car and headed over to the Best Buy for their 1 AM opening. I waited on line for about 30 minutes and was in the store a few minutes after 1 AM. I promptly discovered that they did not have any Nintendo Classics. They weren’t sold out, they just didn’t have any for sale. Not one. Really?!?

I just can’t justify starting this paragraph like the previous two so here’s what I’m going to say. I don’t mind waiting for these things to eventually be available, but the angry person inside of me really wants one right now. The manager at Target said most days they get none in for sale, but some days they get a handful. According to him they have no way of knowing until early that morning and if I want one, I have to come wait on line outside the store at about 5 AM. But there is a very good chance that at 6:30ish he will come out and let me know that they didn’t get any on the truck that morning. That’s like putting a player in your lineup without knowing if he’s playing, and if he is, who he’s playing against.

It turns out there’s a website called brickseek.com that somehow has hooks into Target’s inventory tracking system and has been proven to be very accurate with respect to what is, and is not, in stock. The problem is that buy the time it shows they have any in stock, there are already more people than inventory waiting outside the door to gobble them up. I just wrote me a Node.JS script that runs every ten minutes and checks all of the Targets within 25 miles of my front door to see if any have more than zero in stock. If it finds any, it will both text and email me which stores and how many. From what I gather some Targets update their inventory shortly after 4 AM when they unload the truck. This means that if my script gets a hit, I would have time to piss, get in the car and drive over to be there for the 5 AM line. But do I really want to do that?

Colin Kaepernick – Three weeks ago here is what I said about CK. “I think he’s going to be a sneaky play the rest of season with some big games and some not so good games. He does have top ten potential every week. As a person, however, I think he’s a sh*thead.” Well I’m saying it again this week. Unless you own one of the top five QBs, I think Kaepernick is a legit start every week. Last week he was the best QB in all of fantasy land.

Tim Hightower – Here is what I said about Hightower just last week. “I feel like it was only two weeks ago that I was telling everyone to pick up Hightower. Oh wait, that was two weeks ago when I said that. I hoped you listened.” If he is available in your league, PICK HIM THE FVCK UP!

Derrick Henry – Even though Henry greatly outperformed DeMarco Murray last week, Murray is still the guy to own by a long shot. Henry is simply the handcuff.

Tyreek Hill – This is now the third time in five weeks that Hill has made this list. Is anyone hearing me? In the last five weeks he has averaged 7.8 targets, 5.6 receptions and 60.6 yards. He also has three touchdowns during that span. Although one of them was a rushing score. Personally I think he needs a few more e’s in his name as Tyreeeeeeek is a bit cooler, but if he’s available in my league I’m probably picking him up. Jeremy Maclin who?

Taylor Gabriel – Apparently he is the Usain Bolt of the Atlanta Falcons. Dude is mad fast. He also has four touchdowns in his last four games. He’s starting to feel like a guy that I’ve got to consider starting.

Marquess Wilson – Who? Marquess is as good as mine. Anyone see what I did there? Wilson finished week 12 with 8 catches for 125 yards and a touchdown. That’s big time WR1 numbers. Before last week he had one catch for 35 yards all season. I have no idea what to make of the receivers in Chicago. Especially with Matt Barkley or whoever they have playing at the QB position. I’m going to have see more out of Marquess before I consider grabbing him.

Dion Sims – I could have gone with Lance Kendricks here, but instead I opted for the guy that is owned in zero percent of leagues. And that’s all I’m going to say about him.

Dontrelle Inman – Inman finished with 6 receptions for 119 yards. It was his second 100 plus receiving game of the season. Both games, however, included a single reception for more than 50 yards. If his production relies on the long ball, then I’m not interested. Inman? More like Outman.

In case you were wondering, or were too lazy to do the common core math, these guys listed above combined for 203.54 points. Did anyone in your league top that?