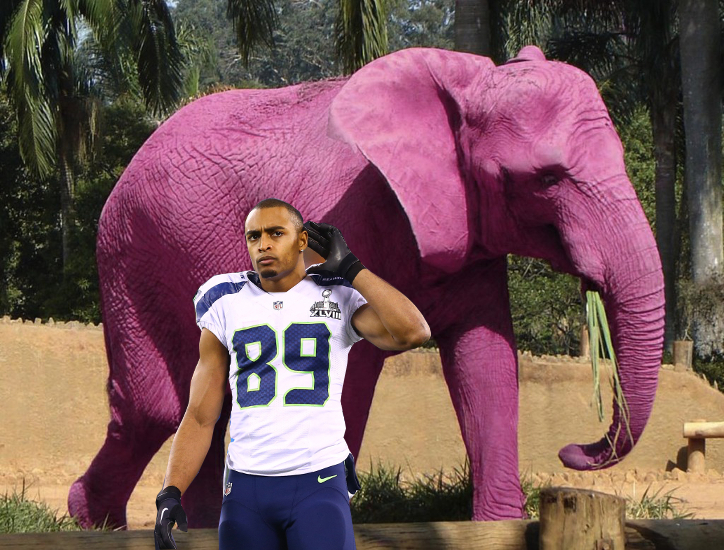 It seems I can no longer avoid the pink elephant in the room. Doug Baldwin (63%). In the preseason I identified Doug as an ideal cheap buy in auction leagues. With an projection of about 167 points and a price tag of at most $2, his points per dollar (PPD) was through the roof. In snake drafts his ADP was about 120 (10th round). Through 12 games he currently has 180 points (1 point PPR). Over achieve much? In week 5 I ranked him as a top-20 receiver. And in weeks 11 and 12, I highlighted for his on field performances. The writing has been on the wall all season. And by wall, I mean my posts. How many of us missed it, or just plain ignored it. In the last four weeks specifically, Baldwin has been one of the top WR in the league. The stats don’t lie. During that span he has averaged 6 catches and 108 yards per game. He also has 6 touchdowns in those four games. Is it a coincidence that his performance has blossomed since Marshawn Lynch has been out of the lineup? I have no idea, but felt obligated to point it out. Can you hear me now?!!

Last week I shined the spotlight on Ryan Fitzpatrick for a job well done in week 12 in which he threw for 277 yards a 4 touchdowns. I received a lot of comments/questions during the week about whether or not he should be started in the coming week. My answer was a unanimous “yes”. He was headed into a matchup with the New York Giants who were giving up the most yards per game to opposing quarterbacks at 315 per game in the league. Fitzpatrick threw for 390 yards and 2 touchdowns. Starting him was a no-brainer. I just hope you all listened. On the season he is approximately the 12th ranked QB. In 12-team leagues, that renders him a viable starter most weeks. In his last seven starts he has averaged 22.19 fantasy points per game in Yahoo! leagues, which is good enough for top five. Personally I like his matchup this week against the Titans. I don’t see “big game” written on this one, but I do see “good enough to make you happy you started him” game potential. Either way, given the facts, at 44% owned, he certainly seems under-owned. If you’re one of the owners that’s been sticking with Ryan Tannehill (71%) or Matt Ryan (92%) all season, then you stand a good chance of being a team on the outside looking in when it comes to playoff discussions. And that guy that’s been running Fitz out there has likely taken that last playoff spot. If the shoe fitz!

Another quarterback only 44% owned that lit up the scoreboard last week is Marcus Mariota. He threw for 268 and 3, but also rushed for 112 yards, including a touchdown. In the last five weeks only Cam Newton, Russell Wilson and Ben Roethlisberger have outperformed him from a fantasy perspective. That’s some good company. Unfortunately I’m not a big fan of his upcoming matchups.

I heard that Donald Trump wants to close the Bortles. Did I say “Bortles”, I meant “borders”. Blake Bortles has 246 points on the season. That’s just over 20 points per game. He has outscored the likes of Drew Brees, Russell Wilson, Philip Rivers and Eli Manning, each of whom are owned in about 95% of Yahoo! leagues. Yet at 72% ownership he is steadily less played that all of them. Those of you that realized the value in Bortles earlier in the season made a quality fantasy move. Back in week 7 I said this, “Bortles has opened up a lot of eyes so far“. In week 9 I ranked him as the 7th best QB. And then in week 10 I had him as a top 10 rest of season. That makes him relatively a weekly starter. I just realized that if James White played for Jacksonville, every time Blake got him the ball, it would be Bortles to James.

I don’t know what the flock to expect out of an offensive player not named Tom Brady in New England. With Gronk out it’s anyone’s guess. Last week after Bolden’s 17.5 point game from week 12, I warned against being sucked into the vortex that is owning a Patriots running back. I went on to mention that I did however own James White (26%), but couldn’t see myself actually starting him. All of this is and was true. Last week his 22.9 point performance lit up my bench. If I’m not going to start him, then why keep him rostered. Simple. So someone else can’t. His value in PPR leagues is obvious. His volatility as a Patriots running back even more. White is the textbook high risk/high reward type player. If you are feeling frisky this week and Gronk is still out, you might want to roll the dice and bet on White.

Just say no to Falafel Powell (26%). Oh, that’s not his name. Don’t care. A good chunk of his value comes in PPR and his opponent this week (Tennessee) is allowing the least receptions to opposing running backs. With Chris Ivory the clear back to own on the Jets, Powell should kept on your bench if you own him as a handcuff.

Last week I was asked to choose between starting Spencer Ware and Stevie Johnson in a standard league. Here was my advice. “Best case scenario, barring further injury to West, Ware’s in a committee. In a committee this week I think Ware is looking at about 40-50 yards and a 55% chance of a touchdown. So somewhere between 5 and 10 points. Denver has been pretty stingy to opposing WR. Johnson is averaging 7.2 points per game. I might take a shot with Ware over Stevie boy…”

How’d I do? Ware ran for 26 yards on 7 carries and scored a touchdown for 8.5 points. As for Johnson, he left the game in the 4th quarter due to a groin injury. Before exiting, he racked up 0 catches on 0 targets for 0 points. I call that a plus 8.5 move!

Bartender, how about a Ted Ginn and Juice Junior? What, you don’t know how to make it. Here are the ingredients. Ten targets, 5 receptions, 80 yards and 2 touchdowns. Shake well and pour drink into highball glass. Garnish with a wedge of grapefruit. Sip and enjoy. At 37% ownership Ginn Jr. is outperforming the likes of Pierre Garcon (66%), Golden Tate (83%) and Stevie Johnson (75%). Over the last six weeks he has been no more or less productive than Dez Bryant (99%). That says more about Dez, than Ted, but you get the point.

At tight end I’ve got Richard Rodgers (42%). Ignoring his hail mary catch, he still put up a nice line of 7 catches for 85 yards. With 4 touchdowns in the last 5 games, Rodgers is going to be the fancy pickup this week. I tried to grab him to backup Tyler Eifert, but missed out. It seems he and Aaron Rodgers have found some chemistry. Perhaps they’ve realized they have something in common. Rodger, rodger!

The last guy I am going to mention in Dorial Green-Beckham (14%). We can all feel it. He’s going to break out in a big way. The question is when. Last week he had 5 receptions for 119 yards and a touchdown. Was this the reckoning or just an early tremor. It’s too soon to tell, but it’s coming. At some point, likely next season, I expect these numbers to be a regular occurrence for DGB.