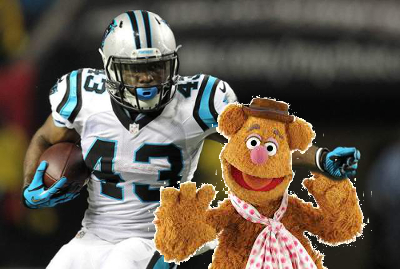 Fuzzy Wuzzy was a bear, Fuzzy Wuzzy had no hair, Fuzzy Wuzzy wasn’t fuzzy, was he? I think that’s how that goes. Here’s my version. Jonathan Stewart was a Duck. Jonathan Stewart had no luck. Without a hammy, what was he? He was Fozzy Whittaker’s ticket to a one hundred yard rushing day. Ok, so that wasn’t very good. How about this one. JStew knew what to do. JStew his hammy blew. JStew knew it true, do you? Admittedly that was not much better. I could keep going with the mediocre attempts, but, contrary to popular belief, I have better things to do. Jonathan Stewart went down. Fozzy Whittaker stepped up, and has been named to my weekly “Are you sh!tting me with this lineup” lineup…

Ryan Tannehill – I almost decided to go with Blaine Gabbert at the quarterback position. He scored a few less points, but his ownership is much lower at four percent. Then I started thinking. Even if Gabbert strings together a few solid starts in a row, no one is ever going to pick him up, let alone start him, outside of three quarterback leagues. So that leaves us with Ryan Tannehill of beans. I really liked him coming into last season. Guess I was wrong on that call as he finished the season 17th among QBs. I don’t see him as anything more than a bye week fill-in this year, but he did end week two with 389 yards passing and two touchdowns. I’ll just ignore those two interceptions.

Isaiah Crowell – I was a bit iffy about including him in this post since his ownership was at 61 percent. That’s a little higher than the criteria for eligibility, but considering he scored the most points for a running back, outside of Matt Forte, I felt he deserved to make the cut. I mean at 61 percent, that means he’s available in 39 of every 100 leagues.  Any time a player scores the second most points at a position in a week and is sitting on the wire in that many leagues, he’s got to be mentioned here, right? Eighteen carries for 133 yards and a score are great numbers. BUT…. His numbers are deceiving considering he had an 85 yard touchdown run. That’s great and all, but even a blind squirrel finds a nut from time to time. Take away that play and his line is 48 yards on 17 attempts and no touchdowns. I have no idea what’s going on Cleveland, but I’d probably take a flyer on the crow.

Fozzy Whittaker – When Jonathan Stewart went down with a bad hamstring, Whittaker got the call. He answered said call by rushing 16 times for 100 yards. Not a bad day for a guy owned in just two percent of leagues. It seems while Stewart is out, Fozzy might be the back to own in Carolina. I said “might”. I’m not sure what to expect out of him, especially with Cam Newton and Mike Tolbert getting their share of carries and goal line opportunities. But the Panther do score their fair share of points. Before last week, Whittaker had never even had double digit carries in a game. I’m certainly not starting him this week against the Vikings. Not to mention all the chatter about Cameron Artis-Payne getting his share of touches.

Marquise Goodwin – Let’s say you had the balls to start this lineup, do you think your opponent would have said “good win” after it was over? Or would he just be embarrassed that he was severely outplayed and that all of his trash talking had just blown up in his face? Marquise might have scored 18.2 points, which was more than names like Jarvis Landry, Larry Fitzgerald and Jordy Nelson, I don’t expect his ownership to change at all. He had two receptions for 112 yards and a score. One of those catches was an 84-yard TD grab. Just like with Crowell, if you take away the big play he has one catch for 28 yards and a whopping 3.3 points. More like Marquise Badloss.

Danny Amendola – Mr. Amendola caught all four of his targets on Sunday for 50 yards and two touchdowns. All four passes thrown to him came from Jimmy Garoppolo. Once Brissett entered the game Amendola didn’t see another target. This was a nice game for Danny, which may have been even nicer had Garoppolo not gotten injured, but I just do not see him as a reliable fantasy producer. So for those of you asking if you can get an “amen” for Amendola, I’m gonna have to pass. Besides I think religion is for the birds.

Greg Salas – Ummmmmmmmmmmmm. No! Although his last name is a palindrome. Too bad his first name isn’t Grerg.

Jacob Tamme – Now here’s a guy I might be looking to add. I thankfully had this guy in all of my DFS lineups last week. This was his second game in a row with 8 targets. He now has 11 receptions, 126 yards and a touchdown in two games. Matt Ryan is going to throw the ball, and with Julio Jones drawing the lions share of the defense’s attention, Tamme just might be the guy that is able to reel in 5 to 7 catches a game. Even if none of those are for touchdowns you are still looking at about ten points. You could do a lot worse at tight end.

Dennis Pitta – Here’s what I said about Pitta last week when asked about my thoughts on him versus Jesse James. “If Pitta can get back to form, he and Flacco have always had a nice connection. However this was his first game back in like two years. I need to see more. Until I see more, I prefer James over Pitta. But Pitta could prove to be a solid waiver pickup this season if he emerges as the old Pitta.” Well I’ve seen enough. I’m buying Pitta. Until he gets hurt at least. By the way James did manage a touchdown last week too.

This lineup I have assembled produced a total of 170.76 points. Check your league. Was there a team that scored more? In the three RCL leagues I am in the highest score was 148.26 points. This score is beatable, but the odds of it happening are about the same as me picking up Greg Salas.

Here are my picks for next week.