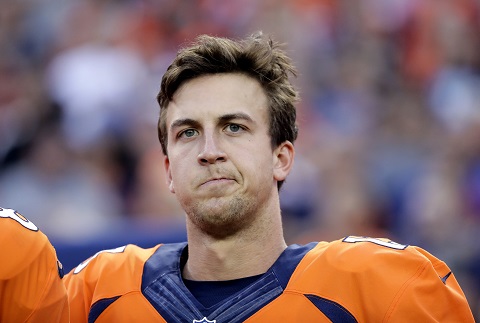 I always thought AI stood for artificial intelligence, especially with my background in engineering. Little did I know that it shared its abbreviation with the deliberate introduction of sperm into a female’s uterus or clitoris for the purpose of achieving a pregnancy. I think that is the procedure they are currently performing on both Jay Cutler and Tony Romo. The facts are a little fuzzy, but that sounds about right. I believe Marcus Semien and Trevor Siemian are the donors, but it could also be Danny Woodhead, Wendell Smallwood or even Ha Ha Clinton-Dix. To be honest, however, I don’t think anyone cares. On the other hand, what they might care about is the following list of jabronies. I think if you tried setting your lineup as such, the web app might just reject it on principle. Let’s take a closer look.

Trevor Siemian – According to Wikipedia, “The simians (infraorder Simiiformes, Anthropoidea) are the higher primates: the Old World monkeys and apes, including humans (together being the catarrhines), and the New World monkeys or platyrrhines.” Yes, I realize the spelling isn’t quite the same, but it’s close enough, right? Aren’t we all simians? Siemian the simian. Or is is sapien? Homo, that is. That’s Yoda style. Trevor Siemian led all quarterbacks in fantasy points this week. The only QB less owned than Siemian in this week’s top 14 quarterbacks (based on points), is Brian Hoyer (one percent owned). Siemian threw for 312 yards and 4 touchdowns. Coming into this game he only had one passing touchdown. Even though he’s thrown for 139 more yards than Aaron Rodgers, I’m not rushing out to grab this higher order primate.

Darren Sproles – This might be a first for this series. I have selected a running back that had negative yards. On two carries, Sproles managed -1 yards. Why is negative one yards plural and positive one yard singular? That doesn’t exactly inspire confidence in him, or me for that matter for choosing him. What landed him in this week’s lineup was his pass catching skills. Darren reeled in 6 catches for 128 yards and a touchdown. Said touchdown also happened to be a 73-yard play. Gotta love the big play to skew a player’s stats. The only time I like big plays is when they happen to me. Otherwise they are just plain obnoxious (and misleading). Although, aside from losing the all important touchdown, ignoring the big play Sproles would still have had 5 catches for 55 yards. That’s 8 points in half point PPR leagues. That’s more than Matt Forte (7.40), Giovani Bernard (6.90) and DeAngelo Williams (6.40) scored this week. The only way I am giving Sproles any consideration is if Ryan Mathews is out. Otherwise I just can’t trust him to get enough touches.

Wendell Smallwood – I’ve got wood! It’s small, but it works. Two Eagles running backs in the same lineup? If Ryan Mathews is going to miss time, my pick is Smallwood to take over on early downs. This week he led the team in carries with 17, rushing for 79 yards and a score. However, considering he had only 3 carries for 17 yards in the first two games, we haven’t much to go on. And then throw Kenjon Barner in the mix and, even without Mathews, you still have three guys to share the load. Does that mean Smallwood has a small load?

Terrelle Pryor Sr. – This guy would be a lot funnier if his name was Richard Pryor Jr., but he probably wouldn’t be that useful in fantasy football. While I’m on the subject of Richard Pryor, I’d like to give a shout out, or perhaps moment of silence, to Gene Wilder. These two teamed up several times and were quite the comedy duo. RIP Mr. Wilder. Now that I’ve gotten that out of the way, let’s discuss Terrelle, or as Hillary Clinton calls him “Super Predator Pryor”. Pryor saw 14 targets this week. Only Antonio Brown had more (18). He caught 8 of those balls thrown his way for 144 yards, but couldn’t manage a touchdown. He’s averaging 10 targets and almost 5 receptions per game. Still no scores, but I have a feeling one’s coming. I’d certainly roster Terrelle if I had a spot. Otherwise someone else in your league is going to pick him up.

Jamison Crowder – By now you have probably read multiple articles this week telling you to pickup Crowder. Well here’s one more. This week he had 4 receptions for 78 yards and a trip to the end zone. One the season he has 7 red zone targets. While a few others are tied with 7, only Emmanuel Sanders (8) and Jordy Nelson (9) have more. It doesn’t hurt that his quarterback, Kirk Cousins, is second in the league in passing yards and fourth in passing attempts. Bartender, shot of Jamison please!

Zach Miller – It was Miller time last week in Chicago when Zach caught 8 of 9 targets for 78 yards and 2 touchdowns. Hard not to get a least a little excited (small wood) about those numbers, but I wouldn’t put too much stock into them. His first two games were pretty sh!tty. Hey, that rhymes! Perhaps Brian Hoyer and he have a connection, but I’m not really buying. Although I kinda like Miller this week against the Lions who have given up 179 yards and a league high 4 touchdowns to opposing tight ends.

Cameron Brate – He managed to haul in two touchdowns. This blind squirrel found two nuts. Maybe they were used during the insemination process. End of story.

In case you didn’t get a chance to add up the points, this lineup combined for 211 points. Check your league and see if any teams would have outscored these guys. Without looking I’m feeling pretty confident that the answer is no.