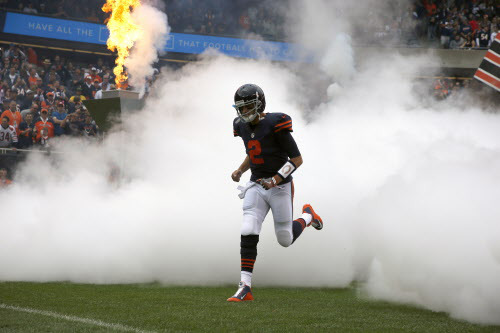 Last week Brian Hoyer would have made this list had Trevor Siemian not had such a strong outing. This week Hoyer would not be denied, finishing as a top ten QB in week 4. He was no Matt Ryan, but he did throw for 302 yards and two touchdowns. That’s a whole two more yard than Julio Jones had receiving. As a matter of fact, Jones had more yards than all but five quarterbacks. I think HBO just inked a deal for a new show called Game of Jones. Julio Jones, Matt Jones, Jacoby Jones, Chipper Jones and James Earl Jones all battle it out for the right to have their way with one of Lolo Jones, Rashida Jones or Catherine Zeta Jones. My money’s on Darth Vader. Although I think Indiana Jones could at least make it entertaining. For those wondering, this will be a much better show than Keeping Up With The Joneses.

Here the lineup I’ve come up with for week four.

Brian Hoyer – I almost went with Joe Flacco here as he did score 2.24 more points than Hoyer, but Flacco is owned in 34 percent of leagues as compared to Hoyer’s five percent ownership. Not to mention, last week I predicted Brian Hoyer would earn this nod. I wouldn’t have the balls to actually start him, but he has been a top 12 QB the last two weeks, which are the only two weeks he’s started. Hey Jay Cutler, if you are reading this, and I know you frequent Razzball, retire…

John Kuhn – Big John Stud touched the ball five times and managed to score three touchdowns. I really have no desire to look up the stats, but that might be some sort of record. Probably not, but it’s still pretty impressive. The rest leaves much to be desired. Three carries for five yards and two receptions for seven more yards. Like I said, nothing to see here.

Terrance West – I considered entitling this post “Westbound and Up” as a little homage to my boy Kenny Powers, but when push came to shove I gave Hoyer the lede. Speaking of Kenny Powers, has anyone watched Vice Principals? I’m backed up on Netflix, so I haven’t had a chance. With Baltimore parting ways with Justin Forsett (again), it appears to be West’s job. Last week, as the starter, he carried the ball 21 times for 113 yards and a touchdown against the Raiders. However, Oakland is giving up 134.5 yards per game on average which is second worst in the league. I’d roster him, but I’d likely bench him. Although he is an intriguing option this week.

Dontrelle Inman – Inman’s numbers are skewed by a 57-yard touchdown. If you ignore that play he had 6 catches for 63 yards. That’s 9.3 points in half point PPR leagues. I’ll take my chances elsewhere. Tyrell Williams, Travis Benjamin and Melvin Gordon are the only Chargers I’m willing to play. I guess I’d have to throw Philip Rivers into the mix as well.

Steve Smith Sr. – Just when you think he’s out, he pulls you right back in. In case you thought Steve was in a retirement home, I’m here to correct you. He has seen 11 targets and hauled in 8 of them in each of his last two games. Last week he caught 8 passes for 111 yards and a touchdown. Steve Smith Sr. is slippery. He’s going to have games like this, but he’s also going to mix in some stinkers. Personally I have no use for him.

Eddie Royal – Eddie money caught all 7 targets for 111 yards and a touchdown last week against the Lions. In years past I’d say he had value in PPR leagues, but in the first four games he only has 18 catches. That’s only 4.5 catches per game, and 48 yards. You can do better than 7 plus points with many other receivers. I’m just wondering, when Eddie roots for Eric Hosmer do they call him Kansas City Royal?

Hunter Henry – With four receptions for 61 yards and a touchdown Hunter had a nice game. But like I said earlier, there are only a few Chargers I’m willing to roster and Henry is not one of them. Besides, once Antonio Gates returns, his limited value plummets.

Brian Quick – I can “quickly” say I have no desire to own Brian.

Check your league and see if any team would have beaten this team which scored 188.48 points.

Last week I predicted Kyle Rudolph and Jordan Howard would make this list. As it turns out, I was right. Here’s why they are not actually listed above. When I made those predictions, their ownerships were much lower. Both saw significant upticks in ownership this past week rendering them mostly ineligible for this list. Their performances, however, were certainly good enough.