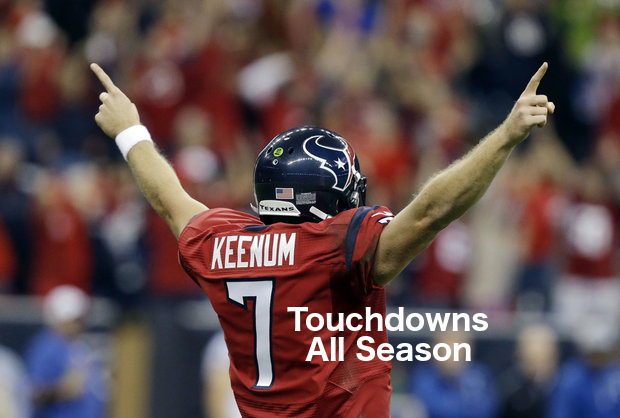 Wow, did I just give the lede to Case Keenum? Based on points, the dude is barely a top twenty fantasy quarterback. On the season he has just seven touchdown passes in six games. I think Matt Ryan had six in one game. Ok, I know he didn’t, but some weeks it feels like he did. In his six games Keenum has thrown six completions to the opposing team. For those not as quick as others, that is what laymen would call an interception. It really seems that I am making a case against Keenum here, and the truth is, I am. I wouldn’t own him anywhere. I’d own Ryan Tannehill over Keenum. I’d probably own Ryan Fitzcraptrick over Keenum. Ok, maybe that’s not true, but you get the point. However, this post isn’t necessarily about who I’d own for the season. Instead, what I try to do here each week is to assemble a lineup using players sitting on the majority of waiver wires that would beat just about any lineup put in its path. Here’s this week’s selections. Or is it last week’s?

Case Keenum – As I mentioned above, this guy pretty much sucks. However, he didn’t suck very much in week 6 when he threw for 321 yards and 3 touchdowns. He also threw in a rushing TD for good measure. He had an interception too, but we can overlook that in the name of 30.54 points. I wouldn’t own him anywhere. Case closed!

Jay Ajayi – For every “jay” in his name he rushed for 100 yards and a touchdown. The rest of the letters were good enough for 4 more yards, giving him a total of 204 yards rushing and two touchdowns last week. 204 yards was more than the 117 yards he rushed for in his previous four games this season. I don’t think he’s a great running back, but he is a good back and I think he has to be owned at this point. Even if Arian Foster is playing, it’s only a matter of time until he’s not.

James White – James was like white on nice last Sunday. Forget about his 19 rushing yards, what we should care about is his 8 receptions on 9 targets for 47 yards and 2 touchdowns. White tied with Rob Gronkowski for the team lead with those 9 targets. In PPR leagues, that is a great thing. James White must be owned. Knowing when to start him in the Patriots offense is another thing. And when Dion Lewis returns, well who the bleep knows.

Kenny Britt – This guy was born in Bayonne, New Jersey. Why the hell is his name Kenny Britt? Shouldn’t he be Kenny Bayonne or something like that. I grew up and lived rather close to Bayonne and there was a saying many had about girls from Bayonne. It went like this, “if the girl is from Bayonne, leave her alone”. Maybe Kenny’s heard this before. Britt caught 7 of 8 balls thrown to him for 136 yards and 2 touchdowns. While I’d really like to say “Kenny’s from Bayonne, so leave him alone”, he is averaging 5 receptions a game for 82 yards. That’s double digit points without a touchdown. Something to think about I guess.

Kendall Wright – I remember when this guy was supposed to be the “bees knees” in PPR leagues. That wasn’t very long ago. How quickly he became Kendall Wrong. Any relation to Jay? I’m looking at you mister editor in chief. Well Kendall went off last week with 8 receptions for 133 yards and a touchdown. Here’s why I am staying away from Wright. He only played 35 percent of the team’s snaps. 75 percent of those snaps were from the slot against the Browns defense who has given up the most yards to opposing tight ends by a long shot. This seems to be a case of a big game against a sh!tty defense. Prove me wrong Kendall.

Cole Beasley – When I realized I had to yank Sammie Coates from my DraftKings lineup Sunday morning, I was torn between replacing him with James White or Cole Beasley. With Dez Bryant out, Beasley looked like a smart play. Ultimately I went with White, but had I chose Beasley I would not have been disappointed as he ended the game with 6 catches for 58 yards and 2 touchdowns. As long a Bryant is out I think Beasley has potential to be a good play.

C.J.Fiedorowicz – Let’s just say that by putting C.J. Anderson in my lineup last week I picked the wrong C.J. Although had they not called back Anderson’s touchdown due to holding on Thursday night I’d be singing a different tune. Fiedorowicz caught 6 of 7 targets for 85 yards and a score. I can’t, in good conscience, recommend Fiedorowicz, however in his last three games he has 14 receptions, 184 yards and 2 touchdowns. Yes, I realize that’s all in a days work for Julio Jones, but we’re talking about a cheap tight end here. Holy commas in that paragraph Batman!

Hunter Henry – Newsflash people, Double H has a touchdown in his last three games. Antonio Gates is like fifty years old and Philip Rivers likes throwing to his tight ends. Besides, with all of the injuries and Melvin Gordon averaging 3.38 yards per carry, what else is Rivers going to do with the ball. In the last four games Henry seems to be good for 5 grabs, 70 yards and a score. Anyone turning those numbers down? Speaking of Double H, anyone know what Triple H has been up to? Who’s got the latest WWE update? Is Goldberg coming back? Sad to see the Undertaker hobbling around on crutches. I need info people! Here’s Keenum’s best Hulk Hogan impression. 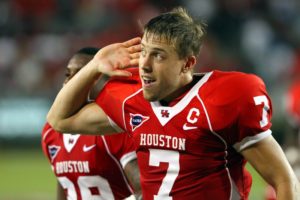 They said it couldn’t be done, but I’ve done it. Last week the team I cobbled together combined for 209.9 points. This week my squad has topped that monster number, scoring 219.34 points. Check your half-point PPR leagues and see if any team came close. Or you could just save yourself the three minutes and just take my word that they didn’t.