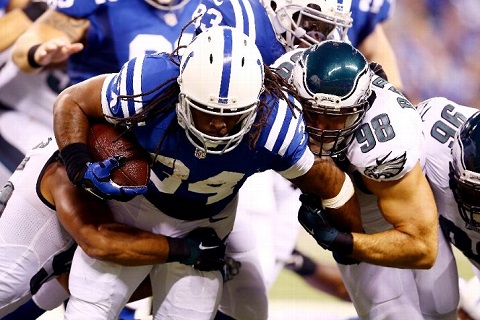 Trent Richardson just experimenting with his new tactic of gaining yardage by getting tackled from behind.

So apparently ESPN had their huge unveiling last night for their new piece of technology that celebrates Chip Kelly’s innovative™ offense by creating a clock that works in reverse of a play clock. So the numbers now count up instead of down. I’m sure money, time, and development went into this, so I should point out that cancer is still a thing. Regardless, the game itself was strangely entertaining for an MNF slot that hasn’t felt relevant this decade. Sure, most of that excitement was produced by Darren Sproles, who is so tiny and fast. And while Foles and the Eagles offense has struggled mightly now in the first half of their first two games, to their credit, they’re now 2-0. And despite an obvious holding call directly leading to a crucial Andrew Luck interception in the 4th quarter, the Colts seemed to waste an actually effective running tandem in Trent Richardson and my chosen one, Ahmad Bradshaw with lousy repetitive play-calling and the mistakable urge to play for field position towards the end of the game. It’s not a death march by any means, but 0-2 is not how I imagined the Colts starting.

Andrew Luck – 20/34, 172 YDS, 3 TD, 1 INT and 4 CAR, 20 YDS. And it has been confirmed, all the footage from the 2014 playoff game against the Patriots was burned. As my preseason rankings reflect, I’m very high on Luck this season, and still am, but it’s interesting to see how formidable narratives can be sometimes.

Trent Richardson – 21 CAR, 79 YDS and 1 REC, 16 YDS. Even with this game, I think he’s still 4 YPC short of the league average, and I wouldn’t be surprised if he’s still trying to figure out which way to run. Okay, fine, he had an okay game, but let’s not forget he fumbled twice (losing one) and even though he may be the starter, any touchdown he scores, I’m going to go ahead and consider that a vulture.

Ahmad Bradshaw – 13 CAR, 70 YDS and 5 REC, 26 YDS, 2 TD. Ahmad Bradshaw, like Trent Richardson… just at a lower salary, who didn’t cost a 1st round pick, and doesn’t excel at turning ten yards of space into a three-yard run.

Reggie Wayne – 3 REC, 28 YDS. Reggie Wayne has never really stepped up to fill the role vacated by Marvin Harrison. If the Colts are going to make the playoffs this year, they really need Wayne to murder someone.

Dwayne Allen – I don’t want to talk about it. Let’s talk more about how I told you to own Bradshaw everywhere. Totally a better topic…