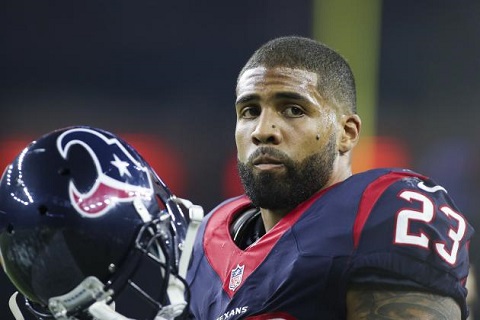 Let me take you back to the 2010 preseason. Fantasy football buzz was building for Houston Texans running back Arian Foster. The buzz started in the offseason because Foster had put together a pretty good (but short) stretch late in 2009. The buzz reached its peak after he carried the ball 18 times for over 100 yards against the Cowboys in the 3rd preseason game. I didn’t care that much about the gaudy yardage total (though it doesn’t hurt!), it was the usage that caught my eye. He looked like a feature back in the making. Despite this he was still a relatively late pick, RB 24, with an ADP (average draft position) of 54 overall. So he was a high priority target of mine that year because presumed feature backs that come cheap are a very rare and a very good thing. And for the chance to acquire a feature back that late in the draft we should be more than willing to accept the slightly greater risk that comes with a player that has “never done it before”.  I mean Arian Foster’s 2010 situation would be kind of like if Ezekiel Elliott was going in the 5th round.  No brainer, right?

It was the 2006 season. The Minnesota Vikings had acquired Chester Taylor and fantasy analysts saw fit to rank him as a 3rd to 4th (37 in ADP) round pick even though he had never been a feature back before. I watched his preseason usage carefully because I was highly interested in making him my 3rd round pick in my home league. I didn’t really care about Yards Per Carry or other stats. I wanted to see usage. What the preseason indicated is that Chester Taylor would almost certainly be utilized heavily in both the rushing and receiving aspects. I ended up taking him with the 33rd pick of my home league draft. He finished the year with 345 touches, 1505 yards from scrimmage and 6 total touchdowns, good for RB12 that year. He was drafted as RB19 by his ADP.

Those two illustrations lead us to this:  The preseason should affect our draft rankings.  For those two examples the market just didn’t correct as quickly as it should have.  Maybe fantasy football is different now, maybe the market corrects more quickly, but I’m not convinced.

The preseason matters because of usage and usage is something you should be paying attention to.   Do other things matter?  Maybe.  Rating what matters the most in the preseason I’d say it’s something like 75% usage, 15% film, 5% stats, 5% narratives.  I suppose it’s possible that film and stats are more important than I suspect, in that case maybe it’s like 65-20-10-5.  If you aren’t sure what I mean by narratives.. well, do you remember “Fat Eddie Lacy” from a few years back?  That’s one example.

Here’s some late round wide receivers (hang on for some thoughts on RBs..) whose usage may be telling a different story than what you’d guess from their ADPs.

Laquon Treadwell was running with the 2nd team in training camp, which is only concerning because the trend has continued through the first two preseason games.  The Minnesota Vikings barely pass enough to support two fantasy wide receivers (and their names are Stefon Diggs and Charles Johnson) so there’s really no hope for Treadwell until he becomes more involved later in the season. In my opinion he’s undraftable in all but the deepest leagues, but he’s still ranked as the WR54 by Fantasy Pros ECR (expert consensus rankings) with an ADP of 135.

Charles Johnson is the player getting the largest boost from Treadwell’s lack of usage.  Johnson was being drafted in the 7th-10th rounds of most 12 team drafts last year with some people unsure if he would put up better numbers than his then teammate Mike Wallace.  Johnson did nothing through the first 2 games then got hit with an injury that would seemingly be short term.  But the injury affected him all season, he briefly came back to play in a few games then was never heard from again. I think Charles Johnson is an intriguing late round draft pick; essentially he’s as valuable now as we thought Treadwell was a few weeks ago, so think WR50-ish.  He’s ranked as WR81 by fantasy pros ECR which tells me the community just hasn’t caught up with this yet.

Devin Funchess of the Carolina Panthers is now similar to Treadwell in more than one way. Seemingly a high upside player, but I’m not sure I buy that. Here’s the skinny on his usage, via Adam Levitan, who has been charting snaps played on his Twitter feed:

This is a little concerning: Cam Newton was in for 13 snaps last night. Funchess only in for five of them and they were ALL running plays.

Unlike Treadwell, Funchess avoids “Do Not Draft” status but I wouldn’t be taking him at WR50.  It seems he’s a bit of an expert’s darling anyway:  ECR of 122 versus ADP of 150 tells the story.  I think selecting him at pick number 150 is about right for someone that wants to take a chance on him.

Of course don’t make too much of out just one preseason game either.  Take Tyler Boyd of the Cincinati Bengals, for instance.  Again, according to Adam Levitan he only lined up in 3-WR formations in the first game but in the second game was on the field with the first team the whole time, lining up everywhere.

Tajai Sharpe of the Tennessee Titans has been playing with the first team:

Titans starters ran 21 plays Saturday. Tajae Sharpe was on the field for 17 of them. Caught six passes and ran an end-around in that time.

But let’s keep in mind that Kendall Wright is not playing (yet). Sharpe is worth considering as a late round flier but Rishard Matthews might be the big winner of the Dorial Green Beckham failure and subsequent trade. Matthews’ playing time is obviously not in question so I’m basically just using Sharpe’s situation as an excuse to include some Matthews love here, because he doesn’t fit the mold of players whose usage we should watch. He’s being overlooked in drafts and there is a huge disparity between his ECR of 141 and his ADP of 206. Unlike Devin Funchess I’m with the experts on Rishard Matthews.

Rishard Matthews, Charles Johnson, Tyler Boyd, Devin Funchess, Tajai Sharpe, Laquon Treadwell.  But I’m not interested in Treadwell.  While we are at it, make sure Eli Rogers is on your radar as well, especially for deep leagues.

Time for some Underrated Running Backs

Well, I guess I better talk some running backs.  Don’t want to leave you hanging after that awesome intro. Are there any Arian Fosters or Chester Taylors this year, you might ask.  I haven’t seen any preseason game evidence related to usage that answers the question like it did for those two.  The question being, are they really feature backs? However, there are some running backs that I think are being slightly underrated given their favorable usage situations.  I might just write a post on them later, for now, here’s a few names to consider: Jonathan Stewart (RB19) and Ryan Mathews (RB21).  Again, those numbers are their Exert Consensus Ranks at the running back position.

Basically I think the strategy to employ here is to pass on the other RBs ranked in the 15-25ish range to take these players instead because they can do the same thing, production wise.  I know they are all injury prone, I just don’t care.  Any RB can get injured so I’d rather take my chances with known injury risks that come at a significantly reduced price.  I think they’d all be considered in the top fifteen of running backs were it not for this risk.  Stewart should not be passed up in the 4th except maybe in the earliest part of the 4th, Ryan Mathews should safely make it to the early 5th.  I wouldn’t take him in the 4th.

I’ll hopefully have a write up on these players later or it might be a slightly different list after I really dig into it.  If you have a different list that’s fine.  But I think you need to spend some time considering which presumed high work load running backs in this range have high and realistic ceilings relative to their draft cost.  I checked and Jay’s ranks basically agree with my three choices, although he also likes Frank Gore and Rashad Jennings in this range.

So that’s it for what could be considered “Myth #4”, which is a reference to my previous post on fantasy football (draft) myths, which you can find here...