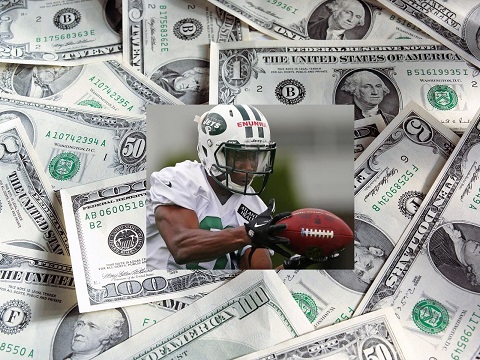 Knowledge of the player base is not one of my specialties as a fantasy football analyst. I have to confess I didn’t know who Quincy Enunwa was coming into the season.  After his week one performance I sure did, but because my process this year has been suckie, I didn’t take notes so I forgot to mention him in last weeks FAAB post. So he’s finally making an appearance as one of this weeks top recommendations. Then I’ll discuss some running backs to pick up after a dreadful week of injuries to that position. Here’s your players to consider for Week 3 FAAB (Free Agent Auction Bidding) waiver claims…

All prices for $100 budgets so if your starting budget is not $100, view them as percentages.

Quincy Enunwa ($8) Looks pretty good so far. He has value now but he could feast if there were an injury to Brandon Marshall or Eric Decker. Do keep in mind that he’s caught 13 of 14 targets this year so unless he sees more targets he can’t keep up anything like what he’s done so far. Hopefully your league mates have forgotten about his Thursday performance already.

Fozzy Whittaker ($7) Cameron Artis-Payne was touted by some as the Jonathan Stewart handcuff but he’s been inactive for both games. That doesn’t mean he won’t be involved if Stewart is out for a prolonged length of time. It does mean that Fozzy Whitaker should be our first choice and he figures to have some value for 1-5 or so weeks while Stewart is out. If your waiver date is later than Tuesday there may be better intel later this week regarding Whittaker and Artis-Payne so act accordingly. What does the low bid recommendation say? That I don’t really trust him to get a big workload.

Dwayne Washington ($4) Theo Riddick is the guy you want to own with Ameer Abdullah probably missing time, but he’s probably unavailable. Washington is mostly an add and see what he does type of player but he figures to have some kind of role.

Jerrick McKinnon ($14) and Matt Asiata ($3) They should both be involved and Matt Asiata could very well have more value than McKinnon because it is Asiata that figures to get the goal line carries. McKinnon will probably get more total carries and receptions, however. Unfortunately McKinnon is probably owned in your 12-team league, although I suspect he’s available in quite a few 10-team (24% ownership in Yahoo!). Bid more if we have information that Adrian Peterson will miss several weeks.

Jesse James ($3) He was here last week too. He’s a tight end that has Ben Roethlisberger throwing him passes.

Carson Wentz ($2) Playing well and could have easily had another TD or two in week two against the Bears. His receivers don’t like catching the ball in the end zone. The Eagles get Pittsburgh this week.

Jamison Crowder ($1) Pretty good player but Washington has been pass happy through the first two games so I doubt the usage will keep up at its current rate.

Just keep in mind these players with really low price recommendations are obviously not mandatory adds, but more like players to consider. There are a number of players to consider for low bids that I haven’t mentioned here. Some names from last week that might still bear consideration include: Shaun Draughn and Cole Beasley. But you could also consider dropping a player of that caliber for one of the others. I wouldn’t be surprised if Draughn ends up starting a game or two at some point due to a Carlos Hyde injury.

Kenny Britt ($12) I have no idea if Kenny Britt is actually available in deep leagues, probably because I don’t play in any. At this point I’d say he’s even interesting in 12 team leagues.