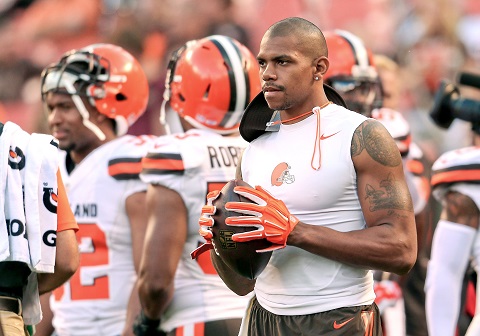 Two things before I get into this week’s FAAB acquisitions, which include The Terrelle Pryor Show and Wendell Smallwood’s supremacy over Ryan Tinytwig (err, Mathews). Firstly, a thank you to all the readers and commenters. Every week there are more FAAB (Free Agent Auction Bidding) specific questions in the comment section and it makes my day to see that. I love FAAB and I think Razzball can be ahead of the curve in addressing the FAAB needs for all of you. Now onto some general FAAB considerations. Specifically, the difference between 10-team leagues and 12-team leagues. Its the quality of player available on benches of 10-team. A much higher percentage of would be stars are available in 10-team leagues. Jordan Howard, Jerick McKinnon and Theo Riddick were all out there in some leagues and that just wasn’t the case for most 12-team leagues. Players like Fozzy Whittaker and Cameron Artis Payne were often still there on the first Sunday morning after the Jonathan Stewart injury. Kenyan Drake was sometimes not acquired even after the news he would start. This latter group of players is nothing really special, but they are decent stopgaps for desperate teams. These type of players are quickly snatched up in 12-team leagues but can linger around the waiver wire in shallower leagues. Now, onto the FAAB recommendations…

Terrelle Pryor ($12) I have no idea what to make of Terrelle Pryor but a WR who is playing at QB (Joe Webb, anyone?) needs to be owned. Now, to be clear, he still played most of his snaps at wide receiver in Week 3. But the fact that he’s perhaps a Cody Kessler injury away from being the Browns QB makes him too intriguing not to own. He’s possibly a WR4 as it stands right now, with Kessler healthy and Josh McCown injured, due to the opportunity to be the goal line QB and score rushing or passing TDs. It’s possible that Josh Gordon’s return will greatly reduce his opportunity at wide receiver.

Kenneth Dixon ($10) Time to stash in case he’s going to be the brightest star in the Ravens backfield. Which he should be.

Brandon Coleman ($6) He’s somewhat heavily involved tonight as I write this during Monday Night Football. Michael Thomas should be owned first where he’s available, I’d go $15 or more on Thomas depending on any Willie Snead injury updates. I don’t actually expect any updates on that front, however.

Wendell Smallwood ($5) Ryan Mathews has some sort of ankle injury. I’m not sure if that’s why he was missing time in week two as well, but he hardly played at all in Week 3. Smallwood is a fairly clear handcuff right now or someone to own until the Mathews injury sorts itself out. They have a bye in Week 4.

Orleans Darkwa ($1) Pay more if Rashad Jennings is expected to miss more time. At the time of this writing it looks like Rashad will be back soon.

Jordan Howard ($30) This week’s prize acquisition. Jeremy Langford will miss at least few games with an ankle injury and it’s very possible that Langford’s job will not be the same when he comes back, meaning we might have a Jordan Howard time share, at the very least.

Coby Fleener ($4) He’s just a mess, but what does that matter if Drew Brees continues to throw passes to him? I told people to drop him two weeks ago which looks like bad advice now, in part due to the Snead injury. This recommendation is not solely based on last night’s game but based on how he’s been used this season.

Darren Sproles ($2) I can’t recommend spending more because I’m fairly sure that he leads the league in huge games from the the bench of fantasy teams. Too unpredictable.

Obviously all the 10-team league recommendations are good for 12-team as well. I’d bid about 1.4 times the recommended 10-team price for 12-team leagues. The higher priced 12-team acquisitions are worthy of being owned in shallower leagues.