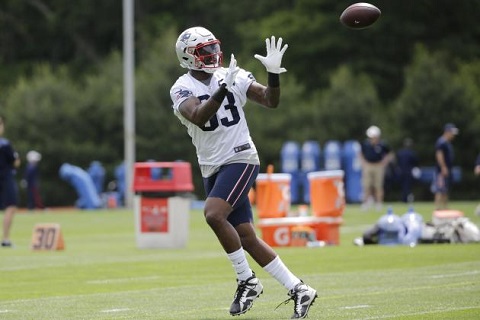 I didn’t see any big shakeups this week. Did we truly go a week without an injury to a fantasy starting wide receiver or running back? Well anyway, what I have here are some names we know very well, the most promising names here were drafted in most leagues. Sadly, I know many of them are not widely available in 12-team leagues but I would rather include oft owned players than not have analysis available for those of you that need it. I also think that many of these players will be hard to get into your starting lineups. There’s a lot of uncertainty with them, which makes sense considering some of them have been owned previously but dropped. Also,”I TOLD PERCY I’D DO THIS!” Wait, what? Here’s fantasy football advice…

Martellus Bennett ($14) – Here’s what we know. Tom Brady will start in week 5. Rob Gronkowski does not appear to be healthy yet. So let’s think about that. How much FAAB would Bennett be worth were Gronkowski suddenly out for the year? (I’m not saying there’s imminent danger of this happening). But that’s Bennett’s upside. I’m sure he’s out there in a few leagues, for instance he’s available in 1 of  2 RCLs that I play in.

Corey Coleman ($5) – His injury was initially described as “4-6 weeks”. At this point two of those weeks have passed. Yeah he’s another player that’s probably available in only a minority of 12 team leagues, but like Bennett he’s available in one RCL I play in. Obviously you need to have room on your roster to stash him, if you don’t have the room, ignore him. Hopefully we’ll get some positive news on Josh McCown soon.

Terrance Williams ($3) – I’m not really sure what to make of him. I know he could be quite good while Dez Bryant is out IF Tony Romo were quarterbacking. With Dak Prescott as quarterback I just can’t say what to expect, but he’s worth a shot. He should have probably been picked picked up last week but it’s possible he flew under the radar after the mid-week Dez Bryant injury update came out. He’ll be out a while.

C. J. Spiller ($2) – Another interesting stash, his role should only increase. What it will increase to, I’m not sure. Perhaps he will soon be startable for desperate teams in PPR leagues, but the Seahawks have a bye in week 5.

Chris Johnson ($1, if healthy) – At the time of this writing Johnson looks iffy for the Thursday Night Football game after he missed Monday’s practice. Not a hearty recommendation but I think he makes a decent stash.

Time to revisit some names from older posts. Not every player I’ve named in the past has been worthy, there have been some mistakes. Here are some players I’ve named that might still be out there and are worth considering once more.

Shaun Draughn ($2) – If you have room on your squad I think he’s a nice player to hold. Cole Beasley ($2) I think he’s owned in most 12 team leagues by now but keep checking that waiver wire.

I know some of the top 12-team recommendations (Martellus Bennett for sure, maybe Corey Coleman) will be available in many 10-team leagues, so look there first.

Dion Lewis ($4) – No idea when he’ll be back, but he should be worth weekly flex consideration once he does, if he’s not simply locked into a RB2 or flex spot.

Ownership % doesn’t really tell us that much because the most commonly used ones are for 10-team leagues and I just don’t generally trust or put much stock into those numbers either way. So if there are other interesting players available in your league that I neglected because I’m assuming they are owned for whatever reason, ask away. I like to ponder (not Christian) player acquisition and value questions.