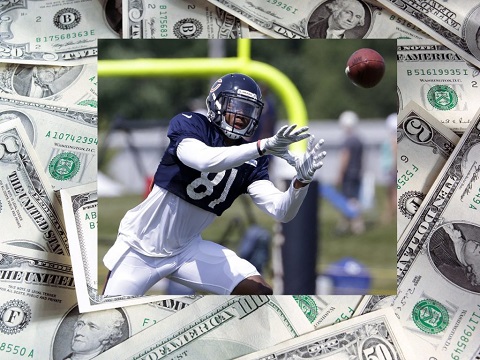 Before we get to Cameron Meredith and other waiver wire recommendations, let’s review last week. Step 1, Acquire Martellus Bennett. Step 2, Start Martellus Bennett (at Flex if necessary). Step 3, Profit. I profited in two (of three) leagues I play in after I acquired him off waivers. I know he wasn’t widely available, but I’d rather write about a player with a chance to make a huge impact in a few leagues than one that might make little or no impact but is widely available. So I’m patting myself on the back for a good call. It feels good to be right for the sake of being right but it also feels good to give helpful recommendations. That’s why I’m taking the time to write this every week. Here’s your players to consider for week 6 FAAB (Free Agent Auction Bidding) waiver claims. The prices are for $100 budgets. View the prices as percentages if your league doesn’t use a $100 budget…

Cameron Meredith ($8) – Chicago Bears wide receiver Cameron Meredith hauled in 9 of 12 targets Sunday. Pick him up where available but you should realize that Alshon Jeffery will be more involved at some point. Jeffery’s targets are so low that they are on par with Eddie Royal’s.

Jeremy Kerley ($4) – So it’s come to this. Kerley was an initial deep league recommendation and he’s been worth of that status. His targets by week are 11, 6, 6, 9 and 13. He is the 49ers WR1 but with a change at QB possible we need to temper expectations somewhat because it’s hard for me to believe he’ll be more heavily relied upon. Colin Kaepernick could be an overall upgrade for the team, I just don’t think he will help Kerley.

Devontae Booker ($3) – Increased usage makes him one of the better handcuff/stashes out there.

Corey Coleman ($3) – He’s here for the second time in two weeks because I’m guessing he’s still out there in some leagues. We haven’t seen him play with Cody Kessler yet but he was great in one game with Josh McCown.

James Starks ($2) – Eddie Lacy is injured, although he may not miss much time, if any. Even if Lacy were to miss time I still can only barely recommend Starks. His history suggests that even with Lacy out he will only be a RB3.

Jalen Richard ($2) – He’s been part of a committee with Latavius Murray and DeAndre Washington but due to Murray’s turf toe injury last week he basically split time with Washington. DeAndre was drafted and held in most 12-team leagues, scoop him up first if he’s available. Richard is more of a desperation or deep league add.

Mike Gillislee ($1) – LeSean McCoy’s handcuff is reasonably productive when given the chance and he’s basically the only other running back they use.

You should acquire Sammie Coates ($6) wherever he’s available. If Meredith ($6) is also available that’s great because you can put in a claim for both to hopefully land one or the other. Kerley should be acquired even in shallow leagues but only if you have room. Stash Dion Lewis (first choice), Corey Coleman or Devontae Booker.

That’s a wrap for the Week 6 FAAB report, aka World Wide FAAB. The price recommendations are low because I don’t particularly like any of these players. But do consider them.