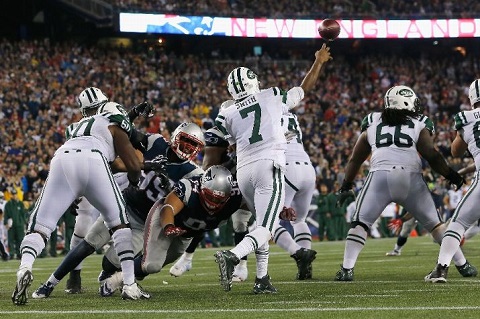 An enthralling Thursday Night Football game? What is this dark wizardry you speak of? In a game that immediately started off with a Patriots touchdown in the first minute and a half, reminding us that it was, in fact, Thursday night, the Jets managed to respond with a scoring drive of their own. Sure, that drive and the next two successful ones all ended in field goals, but there was a level competency that I didn’t think the Jets were capable of. Of course, things fall apart, the center cannot hold, something-something, wax poetic, and the 27-25 Patriots led game came down to a field goal at the 58-yard line, which ended up being blocked. There were your usual Jets/Patriot hallmarks though, including such timeless moments as: Rex Ryan angry! Jets excruciating hard-earned first downs! Brady not getting called for intentional grounding, ever! (The one to Vereen and to Gronk, I was closer to the ball watching from home.) And of course a dirty below the knees hit on a quarterback not named Tom Brady that doesn’t get called! But that’s now two games in a row on Thursday that have been quite entertaining, perhaps teasing us for an even better match-up between the Chargers and Broncos next week. Which means it’ll probably suck.

Tom Brady – 20/37, 261 YDS, 3 TD. Seriously, why do you put a graphic up about Brady’s winning percentage? Is anyone watching the game unaware how many game the Patriots have won with him? Do we really need this information?

Shane Vereen – 11 CAR, 43 YDS and 5 REC, 71 YDS, 2 TD. While Vereen’s touchdown celebration was a respectful gesture to the injured Steven Ridley, it also seemed to be a possible example of him not expecting to score a touchdown that early and having nothing prepared.

Brandon Bolden – 1 REC, 4 YDS. I feel like I could have done this. Why does he get to have his job? I’m available, just saying. His role might expand, just like how Emma Stone might go out on a date with me.

Rob Gronkowski – 5 REC, 68 YDS. GRONK START. Seems almost like a victory in of itself.

Danny Amendola – 1 REC, 19 YDS, 1 TD. “Danny, you just caught your first and only touchdown of the season, what are you going to do next?” “I’M GOING TO DISNEYLAND! (After my season-ending surgery.)”

Geno Smith – 20/34, 226 YDS, 1 TD and 7 CAR, 37 YDS. Geno better get a patent on that run-back-and-sack move he does. That being said, he looked good, not great. While the talent is there, playing at a consistent level is still eluding him, but he showed good poise and limited a lot of mistakes. Which means next week, he’ll throw three interceptions.