…Because I Always Welcome Another Thing to Disappoint Me.

Wait, we’re already rebooting Spiderman again? Oh, hey, quick question, anyone know who sponsored the SNF opening? Was it T-Mobile? Sprint maybe? Also, you should know that Von Miller was jumping with butt-flames before it was hip…

Welcome to what I call “Jay’s Review”… since, you know, I’m Jay, and this is my review of Week 1. Spoilier Alert! (That probably should have gone before the last sentence, but f*ck it, we’re doing it live!) For many of you who’ve been wandering around my Razzballs (haha, get it?) for the last four years, you’ve seen the site go through minute but incremental changes. Kinda like the world in general. So DEEP. And so this season, we’re bringing yet another minute and incremental change… If you hadn’t noticed, Matt Bowe led off the day with his take on what happened Sunday… you should check it out. I think it was a love letter to Kenny Golladay, but whatever. Having such an informative asset (potential double entendre alert!) in terms of both Football and Fantasy Football will allow me to spread my wings and fly. Right over to your mother’s house. It’s no secret that I like having a little fun… probably a little too much fun. For those of you who want deep analytics like how I want to watch Deep Impact over and over again (Armageddon is in my top-10, lest we all forget that asteroid movies are my fetish) and some usable fantasy information, Matt’s your guy. If you’d like to have a little fun with what happened Sunday, experience some jokes, watch some great plays in GIF form, create some hot takes, AND still enjoy some “measured” usable fantasy information, welcome to my club! We get spiffy hats. Just kidding. I just get the spiffy hats. TL;DR – Why so serious? See Matt! Want to see me in a spiffy hat? See me!

Hey guys, did you know that Nelson Agholor is still alive? And that that he did something good yesterday? Important, because on this Carson Wentz 58-yard TD pass to Agholor, I took it as the 19th sign of the end of the world, you know, in case the hurricanes, tornadoes, earthquakes, and fires weren’t telling enough. If you were wondering, my Chargers moving to Los Angeles was number 14.

I really really didn’t want to do a “Hangin’ with Mr. Cooper” joke here, because, I mean, with Amari Cooper, it’s just low-hanging fruit off the joke tree. So instead, I’m just going to tell you about the time that I wanted to use a “Hangin’ with Mr. Cooper” joke and make that into the joke. Get it? It’s just so darn meta. On another note, this is what happens when you show up to leg day… And yeah, that is Derek Carr throwing a touchdown pass to Cooper, in our favorite game of rugby. Speaking of Carr, I like that Marcus Mariota threw for fewer yards, fewer touchdowns, and a lower completion percentage than Carr, but still had a higher QBR. Great metric ESPN!

Two top plays from the Raiders-Titans game? What a time to be alive! Also, you should try Giorgio Tavecchio’s fragrance for men.

The answer to the always prescient question “How sh*tty are the Bears going to be this year”? Easy: VERY. I mean, I really don’t know what’s worse, the Bears pass offense, the Bears secondary, or Peyton Manning commercials… (Nationwide is making me miss the good old days when FanDuel commercials ruled the world. Maybe.)

Top Plays in GIFs: [[email protected]] Cole Beasley playing with his ball for a First Down.

I don’t know about you, and all due respect to Danny Woodhead (RIP), but that catch was gritty as f*ck.

Interesting Tidbits Around the League: MORE TIDBITS FOR THE TIDBIT GOD!

In what I can only describe as the Saltine Cracker of Sunday Night Football games, my main takeaway was that Giants fans have a lot to be excited about this year, like an entire winter with their Sunday schedules open. And is it just me, or does Eli Manning always look like he has this thought coursing through his mind: “Why does Coach McAdoo have posters of Menudo in his office?” Or sometimes this thought: “How many days until I just start drinking straight out of the bottle?” And in this case, we’re talking about chocolate milk bottles.

So, Kenny Golladay appears willing to help Matthew Stafford (who I lovingly refer to as “Fatford”. Totally out of love. Yeah…) earn that new 135 million dollar contract he signed. I actually think it’s great that Stafford has been so charitable in offering to buy the entirety of Detroit with his new contract money. The real question is, what’s he going to do with the remaining 100 million? That’s like what, eight Clevelands? Also, the Lions football stadium is stunningly ugly. They should move to LA. 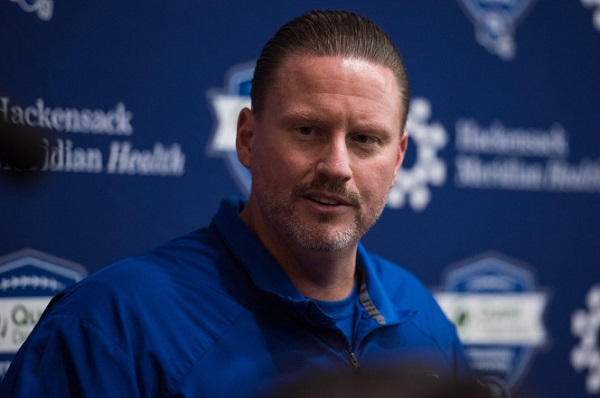 Ben McAdoo looks like a guy who asks someone out on a date, and tells them they’re coming anyway.