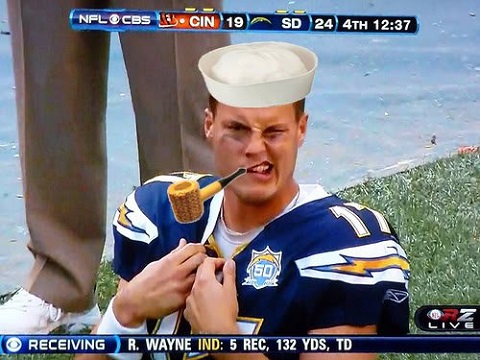 For a sixth straight season, Razzball will be interviewing NFL-team blogs and site contributors for some actual in-depth football knowledge to shed some additional light on our fantasy football knowledge. Keep your eye out for an interview for every NFL team for our Team Preview Series through the summer. This installment comes courteous of our very own Jay.

Philip Rivers had a nice bounce back season last year as he averaged 17.3 points per game in Fantasy. Do you see this average staying about where it is? What will help/hurt his season this year?

He certainly scored a lot more points than that in my fantasy, but that’s what we in the industry call “a slippery slope” scenario. Actually, I think they use that phrase outside the industry as well. Whatever. Philip Rivers is an interesting case study for quarterbacks who succeed when their offensive line succeeds. Of course, all quarterbacks are eligible for this study. Yes, the line in-of-itself is not elite, and it’s probably not above average, but they were a cohesive unit that was coached up last season. D.J. Fluker‘s arm’s are probably bigger than my thighs (sorry to bring my thighs into anything), and with the addition of Chris Watt, the line might actually be better this year. The only concern is depth, and it’s a big one, and so this is probably the long way of saying that Philip Rivers can and will throw for 4,000+ yards and 30 or so touchdowns if his offensive line doesn’t suck.

Keenan Allen emerged as the #1 wide receiver for the Bolts towards the end of last season. Do you see him continuing on this path? Where do you see him ending statistically speaking?

I do see him continuing on his “path”, but it’s a bit more complicated then that. While his talent and production is undeniable, the real question has to be: is there room to grow? Not much. He’s already 22, so I’m assuming there are no more growth spurts coming. In terms of production, while I think he can certainly match last season’s numbers, I think we are close to his ceiling, but what a nice ceiling it is. Not one of those dropped ceilings with water stained tiles. I’m talking cathedral ceilings. With arches and sh*t. I have him down for 77 receptions, 1,156 yards, and 9 touchdowns, good for 167.60 points in standard leagues, and 244.60 points in PPR.

The Chargers’ backfield is crowded with capable running backs. Is it safe to say that Ryan Mathews is a RB2 this year in fantasy? Where would you target Danny Woodhead and Donald Brown in drafts?

Obviously, you haven’t seen my insane ranking of Ryan Mathews at RB7 in standard leagues, and RB9 in PPR. While the arguments I use to justify this craziness is easy, the ‘you believing it’ is the hard part. I actually think he can be a RB1 this year, and like the captain of the Titanic, I’ll go down with the sinking ship if I have to. But only because in this metaphor, I won’t drown. I love Danny Woodhead in PPR leagues and I wouldn’t mind him in standard ones either. He is constantly under-valued in fantasy for some reason. Probably because there’s no category for grit. Donald Brown seems to be a popular handcuff, but I don’t think he sees many carries or receptions if Mathews stays healthy. He was pretty much signed because everyone got tired of watching Ronnie Brown run two yards and then do nothing. That’s, of course, an “if”, but I’m not drafting him on any of my teams. And coming from a guy who makes sure to build his rosters with a minimum of 95.6 percent from the Chargers, that’s saying something. And that’s I’m a ridiculous homer. But it also says I’m not drafting Brown.