Greetings!!! Your boy, Beddict the Elder God chosen, has finally been given the blessed opportunity to compete with this great nation’s finest in putting out Fantasy Football Rankings. What difference does it make if 46 people had to quit for the legendary Jay to reach deeeeeeep into his bench to elevate me to this position of power? Did Doug Williams screw the pooch, or did he lead his team to glory in a time of need? Did Tom Brady shizz the bed, or did he become arguably the greatest quarterback of all time and marry arguably the world’s hottest woman? Yep, the Elders say I’m next to blow (blow up, not blow dong), and I for one trust in their judgement.

NFL training camps have started up, and I couldn’t be more excited if I was a middle-aged woman clawing my way to the front row of the latest Magic Mike flick, with the possibility of full frontal scene from Channing Tatum. Hey, the guy can move, ya’ll. With that being said, it’s time to dive in to my first set of rankings, showcasing the most exciting and probably most important position group… Kickers. Aaaaahkaaaay, that may not be true, but I’m still going to ask that you read. NFL offenses are on full tilt these days, spreading the field and chucking the rock, giving kickers more scoring opportunities than ever before, making what kicker you actually end up with even less important… Did I just contradict myself? Probably not the first time, but say one thing for Tehol Beddict, he admits his faults.

Kickers who will Delight

Matt Prater – I said all of last season that cutting Prater could cost Denver the Super Bowl, but it turned out Peyton Manning fell apart like Christian Slater at his latest audition. Still, I believe it was an idiotic move as the Broncos dumped one of their most effective weapons. It took a few weeks for M.P. to find his bearings, but the boy eventually turned up like Drake at OVOfest, feasting on the competition (Meek Mill), and went back to drilling 50-yarders like they were chip shots. Big bruh has hammered home 24 kicks of over 50 yards, including two 59 yarders and a league record 64 yard boom shot. Hitting 75 percent of your kicks at 50-plus yards isn’t just cool, it’s downright legendary, and if he had stayed in Denver, Prater may have become the greatest kicker in NFL history, I kid you not. I love Detroit’s schedule in 2016 as far as weather is concerned, and expect Prater to have a monster season in what should be a great offensive season for the team as a whole. As you can see, I have Prater as my number two kicker for the season, but he could easily be number one. In fact, I’m guaranteeing he finishes top-5. If I’m wrong in this, you all win a free crotch pic. Believe, for it ain’t no thang but a chicken wang.

Dan Bailey – Bailey is another man with both a monstrous and accurate leg, as he’s hit close to 70 percent of his kicks at 50-plus yards (with an 89.8 percent drill rate overall). I fully expect the Cowboys’ offense to score a ton of points this season, but without DeMarco Murray to punch them all in from short yardage, I’d expect at least a handful of extra field goal attempts inside the 20, making Bailey sexier than Angelina Jolie when she was sexing Bad Santa on the way to award shows and wearing a vial of his blood on her neck. Get on board!

Kickers who will Disgrace

Shaun Suisham – If the man could be trusted to convert 50-yard kicks, Suisham wouldn’t be anywhere close to making this list, but dude is 6/17 in his career from that distance, forcing the Steelers to play it safe and punt. Pittsburgh should obviously put up a ton of points this season, and S.S. will hit a bunch of chip shots because of it, but I still don’t fully trust him after all these years. If he slips up early, he could get the booted faster than Tom Sizemore did from my rehab facility for sneaking in meth in a teddy bear. True story.

Randy Bullock – This has nothing to do with Bullock’s kicking ability, but everything to do with his physical appearance. Look at this cupcake! It sickens me to no end that this charmin soft, michelin man is a professional athlete and I’m sitting at home writing about him. I’ve decided to adopt five children from the orphanage in Tibet I funded and train them all to be professional kickers. One of them WILL make it, I promise you. 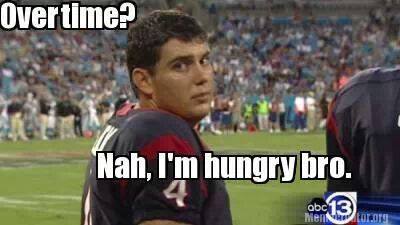 Thank you for joining me for my first NFL post for the season, and I look forward to hearing from you all throughout the season below in the comment section. You will also continue to hear my esteemed colleague (and boss) Jay and I on the Razzball Football Podcast, each and every single week, so get jacked for that. I understand that many of you aren’t excited about talking kicker rankings, but it must be done. You’ve got to be realistic about these things. Enjoy, and I’ll see you again on Friday for Defenses & Special teams.