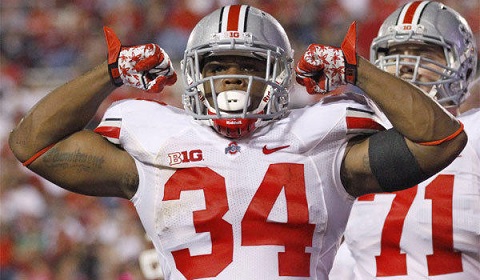 Despite the 49ers doing their best impersonation of a dumpster fire this offseason, there are still some interesting pieces on the roster that remain fantasy relevant. However, none of those pieces are located at the wide receiver, quarterback, or tight end position. So may I have mistakenly pluralized “pieces”. Hey, who wants to ride the Reggie Bush train again? Yeah… and then there’s Anquan Boldin… and his “meh” skillset. Okay, to be fair, Colin Kaepernick could be fantasy relevant again, but I’m pretty sure that’s something you don’t want to bank on, so really, that leaves Carlos Hyde as probably the most (and by default, only) interesting thing on the 49ers roster fantasy-wise at the moment.

While it’s true that Hyde may not be underrated as we progress closer to the season, I think he as at this snapshot in time, mostly because of the aforementioned dumpster fire that the 49ers franchise has become recently, in what seemed to have been accomplished in three total minutes. A new record for self-implosion for sure, unless we’re counting JaMarcus Russell’s career. (Nothing comes close to that.) Though, having Blaine Gabbert on your active roster is mighty good hustle. During the offseason thus far, they have completely restructured their coaching staff (Jim Harbaugh), lost key starters to either free agency or retirement (Patrick Willis, Chris Borland, etc.) and had Colin Kaepernick on the block (allegedly) for a few weeks.

The Kaepernick trade obviously didn’t go through, and that’s part of the reason of why Hyde is an intriguing option in 2015, so I’ll start there. The heir apparent to Frank Gore (I’ve always called Hyde “Gore 2.0”, which sounds like some kind of techno-horror movie, which sounds like a made up a movie genre, which it probably is), Carlos Hyde certainly has the raw ability and talent to be a number one back, but had underwhelming results in 2014 when many, including myself, expected a permanent transition from Gore to Hyde to occur. (To be fair, these might have been unfair expectations for a rookie back.)

It’s not really a strong body of work to judge from, but there are some things we do know. He has tremendous size, and used it to good effect with four touchdowns, all within 4-9 yards of the goal line. His average of 4.0 yards-per-carry is also a solid indicator, despite being used in short-yardage and goal line situations. On top of that, while it’s not a huge part of his game, he can catch the ball, and given the added snaps, will give some bonus value for PPR leagues.

Add in the fact that Trent Baalke, the general manager, has stated that Hyde’s weight is now down to the mid 220-pound range… I’m optimistic this isn’t your normal “best shape in life” type of comment, as Le’Veon Bell, Eddie Lacy, LeSean McCoy and Marshawn Lynch all went through their own weight loss phases in the past with positive results. And as mentioned above with Kaepernick, early reports suggest that the 49ers will be favoring more of the read option, certainly adding another element for the defenses to game-plan against, perhaps opening up some running lanes for Hyde.

True, the 49ers have lost Michael Crabtree, but Torrey Smith is certainly an upgrade there (I might be an upgrade over Crabtree), and while the existence of Reggie Bush will cetainly limit Hyde’s snaps to a certain extent, they really have no one else that can naturally replace Gore’s production. If Hyde can produce anywhere near what Gore did last season (1,106 YDS, 4 TD), and I actually think he can beat those numbers, especially in the touchdown department, you might have a running back that’ll produce second or even, if everything goes right (that always happens!), first round production at strong value, well then, you probably have an underrated player on your hands… It remains to be seen how the offseason will develop, but there are enough naysayers out there holding his value down at the moment.