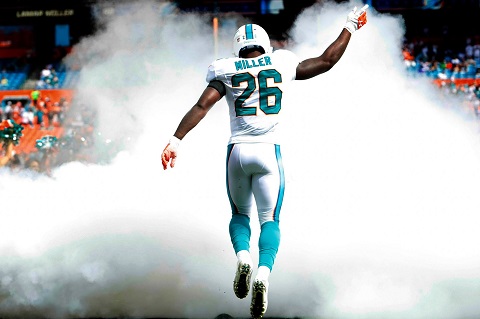 Lamar Miller was a surprise fantasy asset in 2014, ending as the No. 9 running back. His closing line was: 216 rushes for 1,099 yards, eight rushing touchdowns, 38 receptions for 275 yards, and one receiving touchdown. As of August 6, 2015, Miller has an ADP of 39 overall and is the 17th running back off the board. Are people expecting Milli Vanilli Part Deux? I can understand the trepidation in backing Miller. There have been many instances where players have taken fantasy owners on the Buster Douglas elevator. 2006 Cadillac Williams and 2013 Doug Martin are the two that instantly come to mind.

OFFENSIVE LINE – Games are won and lost in the trenches. According to Pro Football Focus, the Dolphins had the worst offensive line in 2014. They allowed a combined 210 sacks, hits, hurries, and were equally atrocious in the run game. The big blow was losing LT Branden Albert to injury and having to move Pro Bowl center Mike Pouncey to guard.

Even with that “offensive” line, the Dolphins still managed to churn out 350.1 yards/game (14th), score 24.2 points/game (11th), and rush for 1,872 yards/game (12th). Branden Albert is expected to return and man the left tackle position. NFL All-Rookie, Ja’Wuan James, who moved to LT after the Albert injury, will slot back to RT. C Mike Pouncey will return to his preferred position. The two guard positions may be manned by Billy Turner and Jamil Douglas, both young players. Regardless, the line should be much improved.

BILL LAZOR – Offensive coordinator, Bill Lazor, had a successful debut for the Dolphins. He incorporated many of the Chip Kelly philosophies and coaxed career years out of Ryan Tannehill and Lamar Miller.

Knowshown Moreno, who was signed in the off-season, was the lead running back until he dislocated his elbow early in the year. Miller became the de facto running back with Daniel Thomas and Damien Williams filling out the depth chart. There was definitely hesitancy from the coaching staff to give Miller a full workload, as he was never given more than 20 carries in any game. As a result, Lazor put the ball in Tannehill’s hands and the Dolphins attempted 595 passes, which ranked them No. 12.

The foundation of the Chip Kelly offense is predicated on the run. When Moreno was the lead back, Lazor fed him for 20+ carries a game. After Miller replaced Moreno and showed that he can carry the load, Lazor now has confidence in Miller.

“There’s no doubt that Lamar can be an every down back,” Lazor told CBSSports.com.”My challenge to him, standing in the hallway outside the weight room in the offseason was, ‘Lamar, do you think you could get more carries?’ Of course he said yeah, which is what I’d expect. So my challenge (to him) was ‘Okay, get your body ready for more.'”

DOLPHINS DEFENSE – Last year, the Dolphins defense allowed 23.3 points/game (20th), conceded 343.4 yards/game (12th), and opponents ran 1,029 plays (19th). That’s all going to change in 2015 with the acquisition of Ndamukong Suh. Suh is a beast that will force opposing offensive lines to double team him. This will free up Cameron Wake and Olivier Vernon on the edges to do what they do. Suh will also make it difficult for opposing run games as well.

With an improved defense, the offense should get more possessions. More possessions equates to more opportunities, which leads to fantasy goodness. If the defense is as good as advertised, that should mean more possessions late in games with the lead. While the yards/carry could decrease as a result, Miller could always break one at the end of the game when the opposing defense is worn down. Miller had one carry over 30 yards last year (a 97 touchdown run in week 17 against the Jets).

A by-product of having an improved defense is that the offense of the Dolphins can practice against an elite unit each and every week. When they get to the real games, they may feel a sense of relief and dominate the Suh-less line on the opposing side.

SHORT-YARDARGE AND CATCHING PROWESS – Miller converted 11-of-14 third-down rushing attempts from two yards or less in 2014. He has also added on 10 pounds of muscle to try and prepare for an increased load. This should only help him in short-yardage situations. Lazor was impressed with Miller last year in those situations.

“We got the ball in the red zone early and he put his shoulder down. He just pushed that thing in there and got the first down. I thought he played with that mind-set all year. So to me those third-and-1 situations, he understood it. He knew that it was a challenge and rose to the occasion.”

Miller is an excellent receiver out of the backfield. He was ranked as the No. 30 player in all of football with a 73.1% catch rate. To put that into perspective, Roy Helu was No. 1 with 89.4%, with Demarco Murray a close second with 87.1%. Miller had a better percentage then Shane Vereen, Randall Cobb, and Antonio Brown.

MAKE IT RAIN – C.R.E.A.M (Cash Rules Everything Around Me for the Wu-Tang deprived folk)… This is a contract year for Miller. No further analysis is needed on that front.

You remember Demarco Murray last year? The “injury-prone” Demarco Murray? The Cowboys rode him into the ground and got every ounce of production out of him before he hit the free agency market. 392 carries and 57 receptions.

I’m not saying that will happen with Miller, but C.R.E.A.M.

Reasons to blame it on the rain…

Current consensus projection on FantasyPros have Miller with:

I think the attempts go up. Current projections have him for 13.5 carries/game. If he gets 16 carries/game, that’s 256 attempts. 11 running backs received 16 or more carries/game last year. If Miller holds up physically, the offense gets more possessions and is more effecient, and the Dolphins run Miller into the ground, then he could approach 300 carries/game. Granted, only two running backs achieved that number last year (Murray and McCoy) so I won’t get there…but I think it’s a possibility.

Jamaal Charles ended 2014 with 250 points in PPR scoring, which translated into the No. 7 running back.

Miller just doesn’t catch enough passes to challenge for the top five. Ending as the No. 6-10 running back is feasible I believe. That’s not bad for a third round pick.