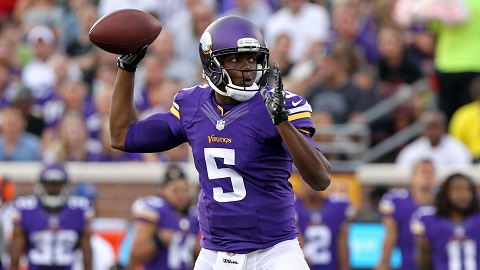 As alluded to last week when talking about father-of-the-year Adrian Peterson, I mentioned a fondness of Teddy Bridgewater for the upcoming season. Part of the fondness could be the amount of puns that could be used in his name, but that feels more like a Chris Berman wet dream than anything entertaining beyond a dad joke, but in terms of fantasy football, there’s a lot to like here.

Well, as you can see, it was quite the pedestrian season. There were some caveats to think about however… First and foremost, he was a rookie. Second, the running game, even with Jerick McKinnon and Matt Asiata showing flashes, was in total, a seesaw affair. (Only the sexiest of affairs are allowed here.) And to add insult to injury, the receiving corps was essentially a disaster. Probably perfectly summed up in Cordarrelle Patterson‘s seemingly egregious need to destroy everything that is good in the world. To be honest, calling the year pedestrian might be giving too much credit before you realize what Bridgewater had working against him. He ranked 22nd in quarterback fantasy scoring, finding himself just ahead of Kyle Orton, who was probably drunk for 190% of his games. Which was also his BAC. And yes, that number doesn’t make sense, probably because I’m drunk too.

But… there are some more caveats entering into the 2015 season that makes him underrated, and in my opinion, a strong streaming option, and even possibly 12-team viable if you squint really hard. CAVEATS EVERYWHERE I SAY. This one was easy for me to figure out, but he is no longer a rookie. Say it ain’t so! But just to add to that point, I’m still a huge fan of Norv Turner and what he can do with quarterbacks. There is definitely a growth factor to think about, and no matter what you think the potential is for Bridgewater (I admit, I was skeptical for a while), the numbers don’t lie. Take a look at his 2014 season split in half:

There’s clear improvement across the board, and I especially like that his long (LNG) average raised substantially as the season went on, and the touchdowns and rating followed suit.

I can’t say I’m a huge fan of Mike Wallace, but there’s little doubt that the deep ball was not one of Ryan Tannehill’s strengths. Adding Wallace also moves Charles Johnson, Greg Jennings and Jarius Wright into better match-ups, while probably moving Cordarrelle Patterson to another state (okay, he’s still young, and while Mike Zimmer and company has had positive things to say about him lately, I’m not sure they are actually fans…) The draft is still coming up, which could bring some changes as well.

And then there’s the return of Adrian Peterson. Obviously, I’m not a fan of his human qualities, but as a running back, he’s certainly an upgrade over both McKinnon (for now) and Asiata (forever). It’s currently up in the air if he’ll remain with the team, but as I stated last week, I think at this point, it’s very unlikely Peterson is not a Vikings player come the 2015 season opener. And that alone should boost all of the offensive principle’s value.

It’s usually folly to cherry pick stats and then pro-rate them into a full season, but no one said I was perfect. Except my mother. If you were to take Bridgewater’s second half and pretend it was a full season, he’d have 3,648 yards, 26/16 TD/INT. That was essentially Jay Cutler, who finished with 256.3 Points and the 14th ranked quarterback last year. You add in all the other points made previously…yeah, he might just be viable as your starting quarterback in 2015, or, at the very least, a very underrated one.