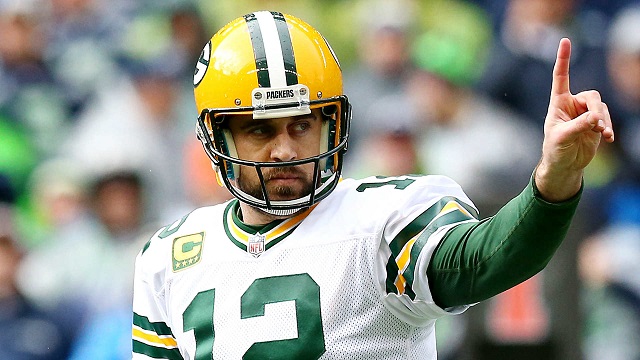 Welcome to Razzball’s Fantasy Football Preview series, where yours truly will guide you, caress you, perhaps even coddle you through your draft preparations and processes. Mmm, processes. And while none of this may be legal and I’ll end up with multiple restraining orders, rest assured that we’ll all be the better for it. Maybe. We’ll go in depth (that’s what she said) at every position… well, the positions that actually count (I’m looking at you Kickers and DSTs…), going over some analysis, the tiers, and any illuminating observations I might have. Because light bulbs are just the coolest thing. Said everyone from the 1800s. Before you get settled down, please refer to Razzball’s 2017 Fantasy Football Draft Rankings, and specifically for this post, refer to our Quarterback Rankings…

Last season, I was iffy on how to approach the draft with this position. I would like to continue that iffy-ness. League context is always important, like the Fantasy Baseball dirty cousin of closers, I don’t think there’s a particular area where you have to draft a quarterback. I personally don’t draft them very high (a strategy I do try to stand by whenever possible)… but there are certainly runs that happen. It just always feels dirty skipping the RB or WR position for a guy that will only occupy like 3% of your roster. And yet, that guy will provide probably 870% of your point totals. (I actually did not do the math.) But you understand what I’m saying… it’s a weird element in this game, a kind of WILD CARD B*TCHES in Fantasy Football. My personal strategy is to make sure to wait in the draft and select a quarterback late and on my own terms. At the same time, it’s really hard for me to argue against paying top dollar or a high draft pick for an elite thrower, or to simply punt the position and stream your way through the season (especially in 10-team leagues). Thus the iffy-ness.

Aaron Rodgers just wants people to relax. In non-passive aggressive speak, that means: don’t bother me, I know what I’m doing. In draft speak, that means: Draft me as your first overall quarterback and go take a 16-week nap. And while the Razzball “Don’t draft a quarterback high strategy” Draft Strategy™ (as mentioned above) is one that I usually advocate, this shouldn’t be taken as a blanket statement. In fact, in some cases, drafting an elite quarterback (Tier 1, maybeeee Tier 2 if you buy me dinner) isn’t crazy. And, of course, depending on your league size (it matters) or formats, also affects what you do with this position. And in Rodgers case, there isn’t really another QB out there (besides his only company in Tier 1) that offers stability, gaudy numbers, and overwhelming handsomeness. Speaking of handsomeness…

Tom Brady right at the top of the rankings… again? This is truly the darkest timeline. While Brady was hit with a four-game suspension last year, we’re looking at 16 games (health permitting) this season from one of the elite quarterbacks (him and Joe Flacco). Just stop deflating those balls man! #DeflatedBallsMatters. And even if you’re not a fan of Uggs and luxury mattresses that have interest payments higher than your mortgage, I think you’d be happy with a QB that can easily put up 4,500 yards and 35+ touchdowns as a floor.

This tier represents the top of two types of quarterbacks; the pocket-passer extraordinaire, and the playmakers that grind points out any way they can. If you haven’t been living under a rock the past decade (no offense rock people), it’s fairly obvious which player belongs where. I personally don’t have a favorite out of this group and while I’d be happy to have any one of these players, I’m not sure I’m comfortable with the price. I’m also not sure if I blame Russell Wilson for Macklemore or the other way around, but my eyes roll just the same.

Drew Brees might not actually belong this low, but he hurt me. He hurt me bad. (I’m pointing at the places on my doll.) While there are still a few weapons on the Saints that should help caress his usual numbers, the team has the potential to be something in between average and awful. Now, 37 touchdowns and 5,208 yards are still top tier numbers, but it’d be folly not to mention he’s not getting any younger at 38-years-old and when the fantasy playoffs arrived last season, many of us experienced his back-to-back no touchdown, three interception games very similarly: with copious amounts of alcohol. While his numbers should still remain impressive, I just don’t feel as comfortable with him compared to his immediate peers.

The third tier kinda ended up being a mix. There’s a some youth and potential (Mariota, Winston, the Dakattack, and I guess Cousins to a certain extent) and then Andrew Luck. Because, well, we don’t really know why. He’s not doing anything football related, and there seems to be some concerns about his shoulder, but I ask you, how can you upkeep a beard like that without shoulder strength? I rest my case. Kirk Cousins is an interesting case study of me having no idea how to rank someone. Yes, he did finish in the top-10 for QBs in 2015, and was the fifth highest scorer of his peers last season, but he’s had some turnover at the wide receiver position and I’m pretty sure Jay Gruden is terrible at his job. People keep trying to tell me that Terrelle Pryor, Josh Doctson, Jamison Crowder, and Vernon Davis are weapons, but are they really? I’m sure a water-balloon can be classified as a weapon, but it’s not exactly your go-to self-defense tool, ya know? That being said, it’s hard for me to pu pu platter the guy, so there he is, leading the third tier…

Yes, the Philip Rivers love will never end. Just like how my Matthew Stafford hate will also never end. I’d call it my yin-yang philosophy, but I’m only half Asian, so that could be racist. Also in this mix is Derek Carr and Tyrod Taylor, two quarterbacks who could actually move into Tier 3 quite easily if they ever decided to flirt with their ceiling (something I do when I’m bored), but will probably be resigned to be slightly above average fantasy providers that find themselves on the wire more often than not. And while that may not sound flashy, I tend to usually find my year-long starters from this group. I’m entirely comfortable running out a squad led by any one of these QBs, and yes, there’s some risk here, but not as much as you think. Play the wire if you need to, use a roster spot before the byes hit to sit on someone from Tier 5 or 6 if you want. Remember, if you draft from this tier, you did so late and the investment wasn’t much. Add in the flexibility during the draft and during the season, I just enjoy the value all around.

I’d probably ignore this tier (sans 2QB Leagues or Deep Leagues), but Carson Wentz has a chance to move up and could be worth keeping an eye on. I’m not terribly bearish on Jay Cutler, at least not to the point of being mean, but I wouldn’t be surprised at all if he snuck his way up to Tier 4 as the season progresses. I’ve always been a fan, and thought that subway turnstiles could provide more resistance than the Bears offensive line the eight years. And having 28,658 different head coaches and coordinators probably didn’t help either.