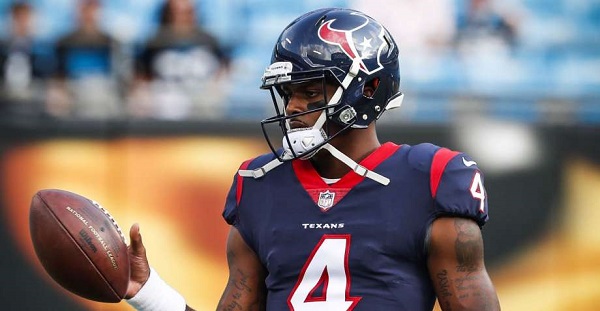 Hello everyone, and welcome to another Wednesday, Rankings Day! In case you haven’t heard, I’m going to be switching up the format for this article. I’m going to keep my blurbs short and sweet, like the Matt/Jay/Tehol do, with more emphasis on the “Tool Time” series, where not only will we have more updated information regarding who’s healthy or not, but also a clearer look at match-ups, and a chance to give you guys more information regarding our Razzball-certified picks for the week ahead.

Well, I was wrong last week, as I talked about how we shouldn’t overreact after one week, and after another 5-TD performance against the Chiefs last week, it’s looking like Watson is the real deal. Now he gets a juicy matchup against Cleveland this week, and Watson should be a lock to finish inside the Top-10.

Washington has had a chance to regroup during the bye week, and now Cousins gets to face his future team at home in the 49ers. I expect for them to try to get Pryor and Crowder as active as they can in this passing game, and against San Francisco, they shouldn’t have any issues. I like Cousins this week.

Now without Adrian Peterson in the picture, I wrote about how Kamara is now the running back to own in New Orleans, and now he faces off against Detroit ready to roll. I expect him to dominate touches in this backfield, and he gets a great first start.

Anderson had been struggling a bit heading into the Broncos’ bye week, but now gets a great matchup at home versus a Giants defense that has struggled against the run thus far, ranking 31st against the run, per Football Outsiders.

Crabtree produced last week without his best friend Derek Carr, and now that it looks like Carr is coming back next week, I’m back on the Crabtree hype train. I’m surprised he’s so low on the ECR.

The Vikings offense struggled a bit on Sunday Night, but I think this offense can get back on track versus the Packers’ exploitable secondary, especially Thielen with most of the attention on Diggs.

Griffin has an excellent matchup against the Browns, who rank 27th against TE’s. The Texans should be rolling in this matchup on Sunday.

Fresh out of the bye week, the Broncos will face a Giants team that could have Matt and Jay start at WR. Yeah I think I’ll take Denver as my DST #1.

Players I’m Not High On

The matchup is tough for Howard. He’s had a pretty good 2017 season thus far, but I would rather find someone else as Howard faces off against the fierce Ravens front seven on the road.

I’m not sure what the issue is for Cooper. Although Carr is coming back, I’m not interest in Cooper for this week, or for ROS.

Rudolph has been up-and-down throughout the entire season, and now has to face a tough GB defense that cover the TE position quite well.

Alright guys, that about does it for me. As always, leave your questions and comments below and I will answer them in a timely manner. Once again, stay tuned for Saturday as I’ll be giving out some Razzball-certified plays for Week 5! Take it easy.